Over the last year, we've seen several B550 models, with the vast majority of these catering to desktop users and gamers looking for a cost-efficient option to use with AMD's Ryzen processors. Back in January, we reported that ASRock Rack had readied up a new B550 model with a more professional flavor, the B550D4-4L. The B550D4-4L features support with a broad range of AMD Ryzen processors, including 5000, 4000G, and 4000 Pro, with support for most 3000 series processors. Some of the board's core features include Gigabit Ethernet, support for 128 GB of DDR4 memory, and an ASPEED BMC controller for management over a network. We get to grips with the ASRock Rack B550D4-4L and see how it compares to other AM4 models in our latest motherboard review. It came with a few surprises as well.

Perhaps considered one of the most 'interesting' motherboards based on the B550 chipset is the ASRock Rack B550D4-4L. At the time of writing, the B550D4-4L is the only B550 board known to us that includes a BMC controller. It is designed to utilize the power and high-core count of AMD's Ryzen 5000 and 3000 desktop processors, with support also available for AMD's Ryzen Pro 4000 series and some Pro 3000 Processors. 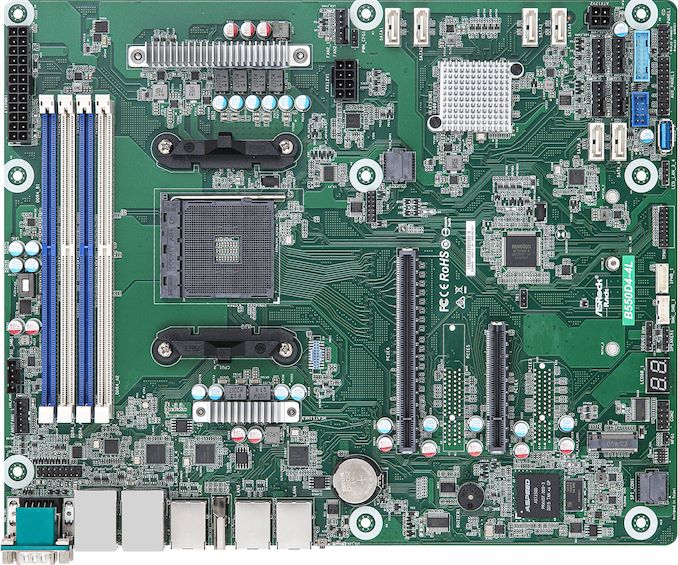 Looking at the overall design, it is focused on professional use and uses a standard green PCB. The B550D4-4L opts out of fanciful aesthetics and instead focuses on core functionality. Along the top is four memory slots which are horizontally mounted, with support for up to 128 GB DDR4-3200, both ECC with supported Ryzen Pro processors and non-ECC memory on the regular Ryzen desktop models. The B550D4-4L has one full-length PCIe 4.0 x16 slot and one half-length PCIe 4.0 slot. For storage, there's just one M.2 slot but is only capable of supporting PCIe 3.0 x4 or SATA drives, as well as six SATA ports, four from the chipset and two from an ASMedia controller.

The rear panel has four Intel Gigabit Ethernet ports, with a fifth Ethernet port for the board's ASPEED BMC controller, allowing remote access to the system over a network. Other connectivity includes an HDMI output for use with processors with integrated graphics and a D-Sub output (DB15) for the BMC, and four USB Type-A ports, two USB 3.2 G2, two USB 3.2 G1. ASRock Rack also includes a serial connector (DB9). The B550D4-4L also has a USB 3.2 G1 header providing a further two ports, a USB 2.0 header for two ports, and six 6-pin fan headers. 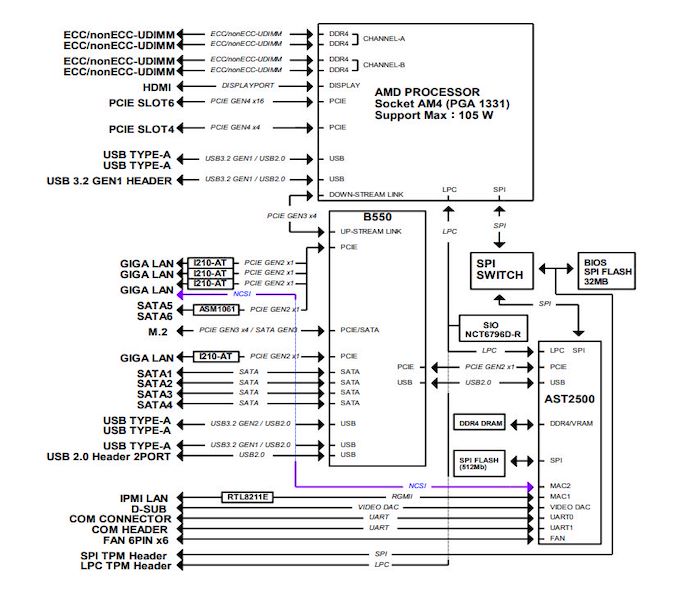 Looking at performance, the B550D4-4L was surprisingly competitive in our computational-focused benchmarks, with the board using AMD's Precision Boost Overdrive at default. This is above simply doing a good turbo, making the board perform a lot better than we would assume.

One downside in performance was perhaps the memory - it ran at DDR4-3200 CL22 as opposed to other B550 models we tested at DDR4-3200 CL16, and no matter what values we put in for the latencies, they stayed at JEDEC CL22.

The B550D4-4L also proved competitive in our system testing, with faster than expected POST time performance. It showed lower power consumption in long idle and idle power states than most boards, while power consumption at load was comparable with other models on test. The board's DPC latency performance isn't great, but it doesn't include any form of audio codec or audio output regardless.

The ASRock Rack B550D4-4L is a unique B550 model, with not much competition in the way of server-focused models. ASRock also has a model based on the propriety deep mini-ITX form factor, the B550D4ID-2L2T, which uses the B550 chipset for more professional level function. Unlike other B550 models, the B550D4-4L disables overclocking, which is understandable given its lack of heatsink capability on the power delivery, highlighting that this board isn't for pushing the boundaries or requires a system with strong airflow.

The real capability comes for users looking to build a Ryzen desktop-based server with the associated performance levels at default settings, along with added functionality for both Ryzen Pro series processors and the ASPEED BMC controller allows access and control of the system remotely. It's also the only B550 model to feature four dedicated Ethernet controllers, and it makes it one of the most interesting AM4 models we've received for review so far.