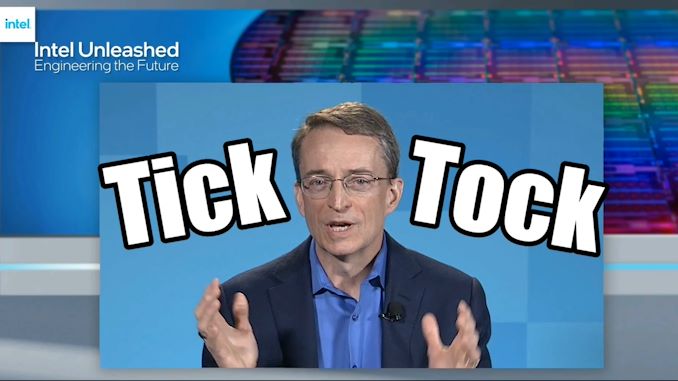 As part of today’s announcements, during Intel’s Q&A session after the prepared remarks, CEO Pat Gelsinger explained how Intel is going to revive its fortunes when it comes to its leading edge compute products. One of Gelsinger’s mantras seems to be that unquestioned leadership products bring unquestioned leadership margins for those products, and for Intel to execute, it needs to return to its days of old.

In the past, through the 1990s, 2000s, and into the 2010s, Intel’s manufacturing philosophy was known as ‘Tick-Tock’. This means that for every product generation, the leading edge compute hardware was either a Tick (process node enhancement), or a Tock (microarchitecture enhancement). Each generation would alternate between the two, allowing Intel to take advantage of a familiar design on a new process node, or using a mature node to enable a new performance-focused design. That policy was scuppered when delays to Intel’s 10nm forced Intel into more of a Tick-Tock-Optimization-Optimization-Optimization model.

Today CEO Pat Gelsinger stated that at Intel’s core it has to re-establish the Tick-Tock model that enabled repeated leadership in the CPU ecosystem, buoyed by a healthy CPU roadmap. Part of this is re-establishing discipline in Intel’s ranks to continually provide both microarchitecture updates and process node updates on a regular expected cadence. Pat stated as part of the call that Intel will look towards a confirmed yearly process node improvement, and as a result, there might be a lot of Ticks in the future, with a push to more Tocks as well. 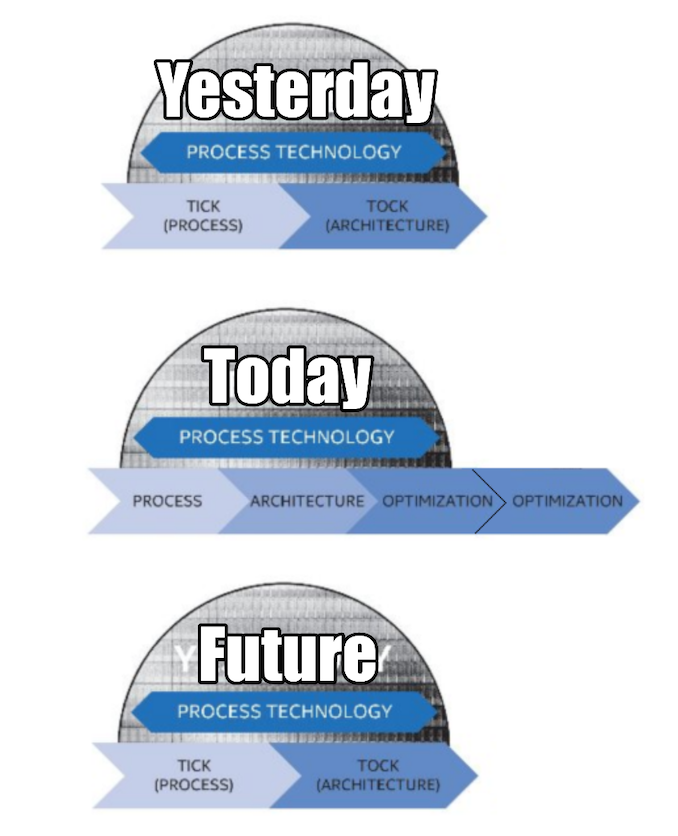 On top of this commentary, Pat Gelsinger also stated that Intel’s CPU roadmaps are already baked in through 2021, 2022, and 2023. The company is thus looking to 2024/2025 for ‘unquestioned CPU leadership performance’, which traditionally means the fastest processor for single thread and multi-thread workloads. This is for sure a laudable goal, however Intel will also have to adapt to a changing landscape of chiplet processor designs (coming in 2023), enhancing on-die accelerators (GNA already present), and also what it means to have leadership performance – in the modern era, leadership performance doesn’t mean much if you’re also pushing lots of Watts. Intel stated that its 7nm process is now comfortably on track to deliver Meteor Lake, a client CPU using tiles/chiplets, in 2023, however we are likely looking to a 7nm variant or even external processes for a 2024/2025 product. Intel has also stated that it is looking to consider the core of its leading edge compute on external foundry processes, although one might argue that this doesn’t explicitly say ‘CPU’.

It is also worth noting that Intel/Gelsinger isn’t calling its disaggregated silicon as ‘chiplets’, and prefers to use the term ‘tiles’.  This is because Intel’s tiles amount to long wires across 3D packaging technologies like EMIB and Foveros, compared to package-based multi-die interconnect that require buffers as well as control fabric. Tiles by this definition are more costly to implement than chiplets, and have additional thermal considerations by having high-powered silicon close together, so it will be interesting to see how Intel balances these new packaging technologies with the more cost-sensitive elements of its portfolio, such as client processors.

It’s been known that Intel’s microarchitecture teams haven’t been idle waiting for 10nm to come through the pipe, with a number of designs ready and waiting to go for when the process node technology matures. With any luck, if Intel can get a headwind with 7nm, when 2024 rolls around it might all come thick and fast.