NZXT Phantom 410: The Boutique Favorite Goes On a Diet

If you browse custom builds across different boutiques, you'll find NZXT's name comes up an awful lot. One of their enclosures, in particular, tends to see a lot of action: the Phantom. Its unusual angular design for some people is the right mix of style and gaudy, resembling the kind of case an Imperial Stormtrooper might choose if they were planning on learning how to at least hit the broad side of a barn in their off-duty hours. Today we take the wraps off of the Phantom's new fun size version, the Phantom 410, offering all the style without the massive footprint. 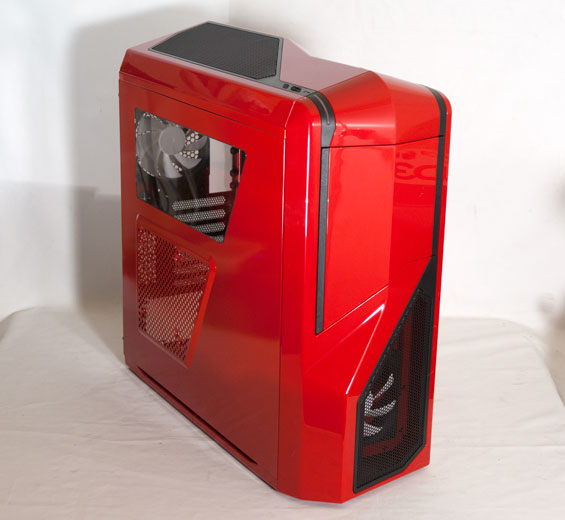 Indeed, if you remember the original Phantom (we unfortunately never got a chance to review the case on its own, but the iBuyPower Paladin XLC we reviewed employed the enclosure), you'll be at least a little bit amused by the Phantom 410. It's still not exactly a "small" case, but it's definitely more fun-sized compared to its predecessor. Fan controls have been reduced from three individual ones to a single main controller that runs the entire enclosure, while the drive bay door is latched closed (press in, then it pops out) as opposed to just swinging open. Other than that, it's pretty close to its larger predecessor.

While I've gotten used to other enclosures in this market getting bigger or adding new features, NZXT plays it fairly cautiously (in some respects at least) with the Phantom 410. Internal clearance is actually at a little bit of a premium, and while the Phantom 410 happily supports a 240mm radiator, you'll lose four drive bays if you decide to go with a video card bigger than an NVIDIA GeForce GTX 580. Massive tower-style coolers may also have trouble fitting due to the low clearance from the side panel.