When AMD announced their Brazos offerings, the part that immediately caught our interest was the E-350. The E-240 comes with a lower 1.5GHz clock and a single core, but the same power requirement, so unless that’s priced particularly low we don’t see any reason to consider it. The two C-series parts go after the netbook market, with 9W TDP and clocks of 1.0GHz on the dual-core C-50 and 1.2GHz for the single-core C-30; at least the C-30 makes up for the missing core with a higher clock speed here. But really, it’s the E-350 with its 1.6GHz clock speed, dual cores, and higher clocked HD 6310 GPU that delivers everything we want to see. The real question is, does it deliver enough within its price bracket to match the performance and features on tap?

When we reviewed the HP dm1z a couple weeks back, we were impressed with the overall package, performance, and perhaps most importantly, the price. Reasonably equipped with 3GB RAM and a 320GB 7200RPM drive, you can grab the dm1z for just $450 with HP’s current $100 instant rebate (which looks to continue for the foreseeable future). You can even bump that up to 4GB and still spend just $480 (plus tax and shipping, of course). The overall package was so attractive that it garnered our Silver Editors’ Choice award, missing out on the Gold by virtue of its lackluster LCD, so the competition has a high bar to clear if they want to beat the dm1z. 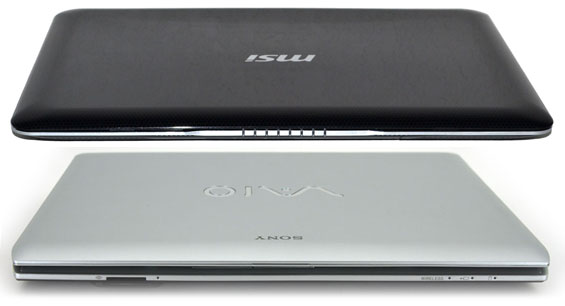 Today, we have two more laptops sporting very similar specs, with the key difference being the amount of RAM and the capacity and spindle speed of the hard drive. The MSI X370 also mixes things up by moving to a larger 13.3” chassis, which may or may not be a good thing depending on what you’re after. Dustin has the Sony VAIO, courtesy of AMD, while Jarred has MSI’s yet-to-be-released X370. According to MSI, the X370 may not actually go on sale in North America; that would be a shame, as with the right price there’s plenty to like. And since we’re on the subject, let’s discuss pricing a bit more.

Sony’s pricing is a bit high, with an MSRP of $599; that’s not great but we can find the YB online starting at $550. With the HP dm1 going for under $500, you’d need something else to make either offering worth considering; the styling, 4GB RAM, and 500GB HDD might be enough to attract buyers away from the HP. MSI’s X370 is a bit of a wildcard, with one review suggesting an MSRP of $749. I haven’t been able to confirm that, but let’s be blunt: at $750, there’s simply not going to be a market for anything Brazos related. For less money, you can find quite a few higher performing options that offer similar or better graphics and features, with reasonable battery life. Here’s hoping we can get the X370 pricing down to $550 or less.

One thing that shouldn’t be too surprising is the performance. If you’ve read our Mini-ITX Brazos reviewor the HP dm1z review, the only thing that’s going to change performance in any significant way is the battery capacity, with the hard drive having a minor impact on a couple benchmarks. The CPU and GPU at the heart of the E-350 will determine the rest, and all three laptops are very similar as far as performance goes.

We received quite a few requests for additional testing to show exactly where the line is between acceptable performance and sluggishness, particularly in regards to older games. We don’t have comparative results from other laptops yet, but we’ll at least report our performance and impression of the E-350 in this review. The other request was for SSD benchmarks; if you want a faster laptop experience, any decent SSD will get you there. We’re working on one more article comparing Brazos to a selection of other mobile platforms, with all units running 60GB Kingston SSDs. We’ve still got plenty of tests to run, but as you’d expect having an SSD makes a noticeable impact on system boot times, application load times, and general Windows performance. If MSI wanted to ship the X370 with a similar SSD, we would be a lot more willing to pay a price premium.

With the preliminary introductions out of the way, let’s take a closer look at the MSI X370 and Sony VAIO YB before we hit the benchmark charts.