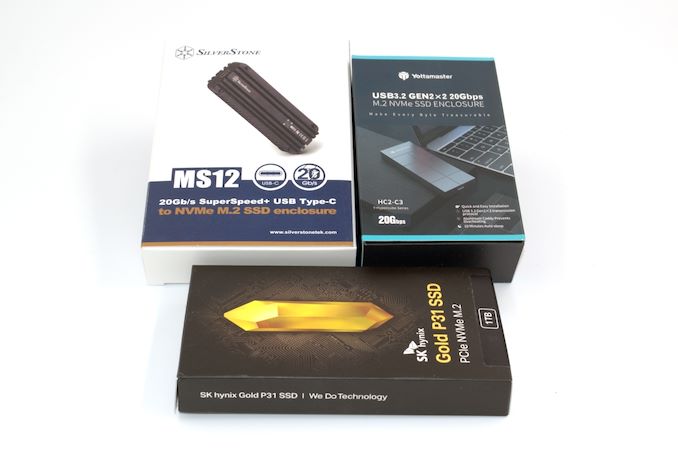 Late last year, we took stock of the the state of the USB 3.2 Gen 2x2 ecosystem. It was not a rosy outlook at that time. But since then, many vendors have introduced new products in the 20 Gbps-performance class, and host support has also started to look up. A few new enclosures in this speed class have also appeared in the market.

In parallel, we have seen 3D NAND layer counts go up and QLC become more prevalent. Capacities of SSDs and external bus-powered direct-attached storage (DAS) devices have increased, with 4TB being offered by almost all vendors. Consumer trends in terms of DAS workloads has also undergone some shifts.

To that end, today we're going to take a fresh look at the market for 20Gbps external storage enclosures, thanks to some new enclosures as well as our new DAS test suite. Both SilverStone and Yottamaster have put out new enclosures in recent months with their respective MS12 and HC2-C2 enclosures, and we're anxious to see if the state of Gen 2x2 devices has improved at all in the last several months. So with that said, let's dive in.

External bus-powered storage devices have grown both in storage capacity as well as speeds over the last decade. Thanks to rapid advancements in flash technology (including the advent of 3D NAND and NVMe) as well as faster host interfaces (such as Thunderbolt 3 and USB 3.x), we now have palm-sized flash-based storage devices capable of delivering 3GBps+ speeds. While those speeds can be achieved with Thunderbolt 3/4, mass-market devices tend to rely on USB for cost and compatibility reasons. Within the USB ecosystem, USB 3.2 Gen 2 (10 Gbps) is fast becoming the entry level for thumb drives and portable SSDs. Premium devices sporting the USB 3.2 Gen 2x2 (20 Gbps) interface have been making it to the market over the last 18 months or so, but have been held back by the lack of widespread host support in desktops and other computing platforms.

The SilverStone MS12 and Yottamaster HC2-C3 we are looking at today are both based on the ASMedia ASM2364 bridge chip, and are capable of accommodating M.2 NVMe SSDs up to 80mm in length. Both are aluminum enclosures. While the MS12 comes only with a single Type-C to Type-C cable (USB 3.2 Gen 2x2 is only supported via Type-C), the HC2 comes with both Type-C to Type-C and Type-C to Type-A cables, with the latter capable of operating at up to 10 Gbps. SilverStone provides spare thermal pads along with the ones pre-installed inside the enclosure. The SSD installation involves securing the drive with a screw. 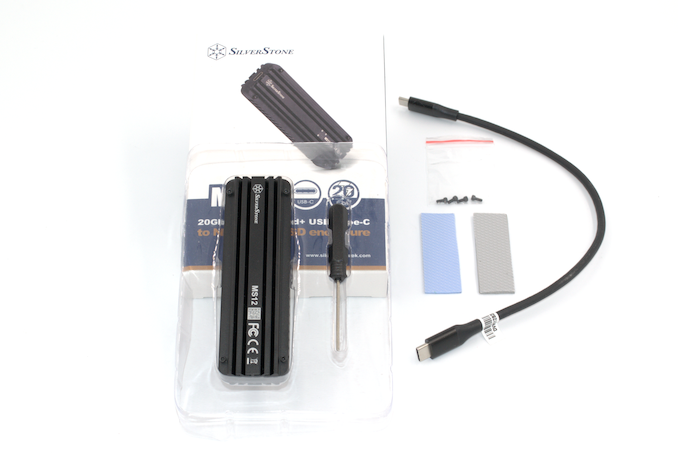 The Yottamaster HC2-C3, on the other hand, supplies thermal pads separately. The package also includes a spare M.2 SSD securing tab, with one pre-installed in the main board inside the unit. The plastic tab solution is a nifty one, as it makes the internal SSD installation a tool-less one. The underside of the case still needs to be secured with a screw, though. 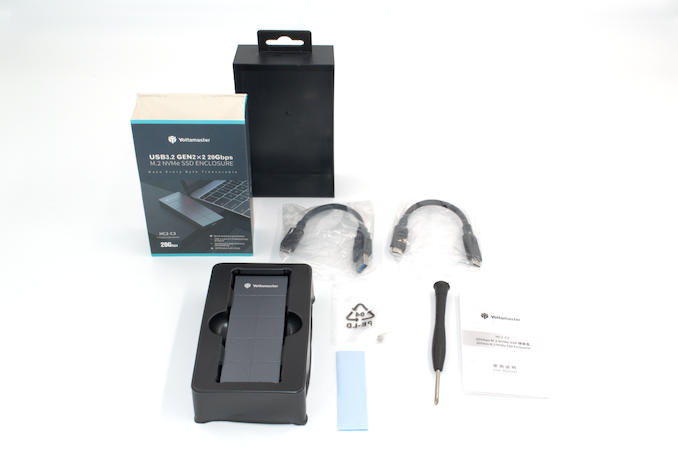 Both enclosures are being reviewed with the SK hynix Gold P31 1TB NVMe SSD installed, a very solid and low-power drive that's a good fit for these external chassis. The galleries below show the internals of both enclosures.

The thermal solution and SSD mounting mechanisms are brought out in the above pictures. Both these aspects are integral to the user experience. The effectiveness of the thermal solution can be measured objectively (done in a later section), while the mounting mechanism can only be subjectively evaluated. The MS12 utilizes a screw to secure the SSD, while the HC2-C3 adopts a pre-mounted plastic tab. The latter enables a tool-less experience for the mounting segment. User preference may depend on the usage scenario - in cases where the NVMe SSD needs to be frequently swapped out, the HC2-C3's plastic tab mechanism is preferable. The MS12's screw-based solution is a time-tested one and is inherently sturdier. The bridge chip (ASMedia ASM2364) is also visible in the gallery photos.

Meanwhile, as part of taking a fresh look at the state of external USB enclosures, we have moved to a new DAS testbed in order to enable the processing of our tweaked DAS test suite. We'll dive into this more on the next page, but among other changes, moving forward we'll be reviewing all NVMe SSD enclosures with the same SK hynix P31 in order to make apples-to-apples comparisons related to the thermal solution and other aspects.

But getting back to our enclosures, both support S.M.A.R.T passthrough, as shown in the CrystalDiskInfo screenshots below.

The table below presents a comparative view of the specifications of the different storage bridges presented in this review.

Prior to looking at the benchmark numbers, power consumption, and thermal solution effectiveness, a description of the testbed setup and evaluation methodology is provided.