Intel’s Client Computing Group, or CCG, had revenues of $10.0 billion for the quarter, up 2% from a year ago. Intel attributes the growth to modem sales and desktop platform volume. Intel is of course moving out of the 5G modem business, but will maintain its other connectivity offerings in the CCG such as their Wi-Fi products. Notebook platform volumes were down 1% in this quarter, with average selling prices staying flat, but desktop platform volumes were up 7%, but average selling prices fell 4%. Intel has said that they are expecting their chip shortage to be over by the end of this fiscal year. 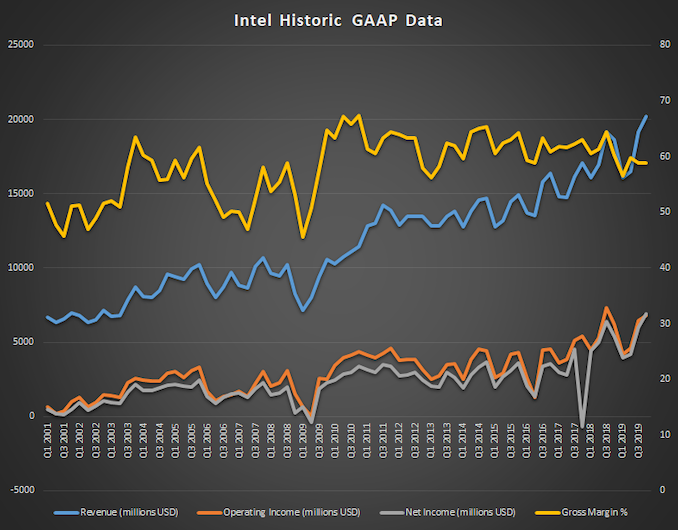 Intel’s Data Center Group had revenue of $7.2 billion, up 19% from a year ago. Data Center sold 12% more unit volume this quarter than Q4 2018, and also added in 5% more average selling price per unit, so Intel’s DCG group is still very healthy.

Non-volatile Storage had revenue of $1.2 billion for the quarter, up 10% from a year ago which Intel is attributing to both NAND and Optane bit growth.

Programable Storage was the one area where Intel had a revenue drop, falling 17% year-over-year to $505 million, with no explanation given, but clearly FPGAs were in shorter demand.

Looking ahead to Q1 2020, Intel is expecting approximately $19.0 billion in revenue for the quarter, with earnings-per-share of $1.23.