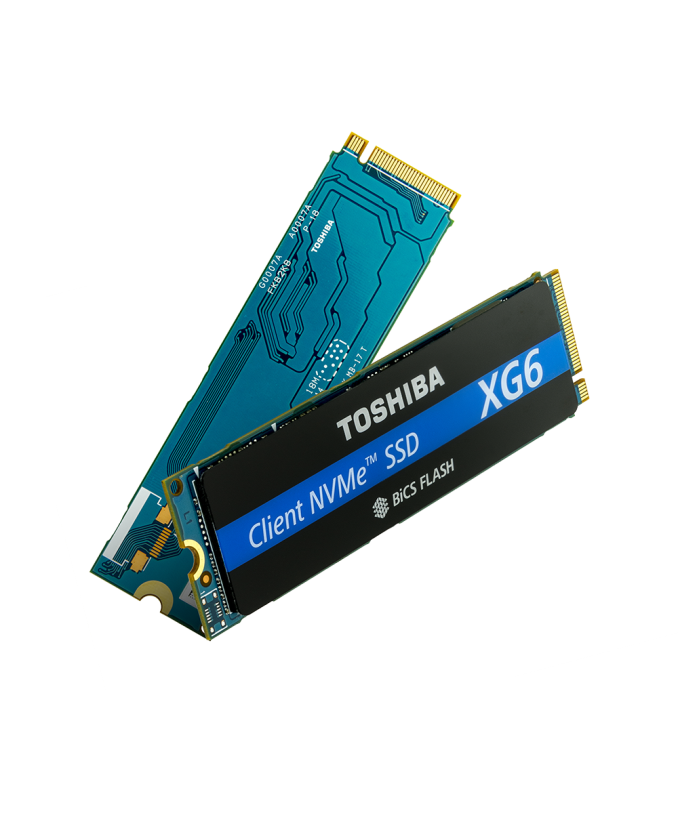 Toshiba is introducing their first SSD using 96-layer 3D NAND flash memory. The new Toshiba XG6 is an update to their XG5 client NVMe SSD for the OEM market. The new 3D TLC NAND should help reduce costs, and will also allow for significantly higher performance. The XG5's performance wasn't competitive with high-end NVMe drives but was plenty for most purposes, and the XG5 was the first NVMe SSD to offer power efficiency similar to SATA SSDs on a variety of workloads. Toshiba promises similar efficiency from the XG6 in spite of the increased performance.

The Toshiba XG6 is still using the same controller as the XG5, so the improvements are mostly due to the new NAND flash, plus some firmware optimizations. The new 96L 3D TLC supports Toggle NAND 3.0 interface speeds in the 667-800MT/s range compared to the 400-533MT/s speeds used by earlier 3D NAND from Toshiba, so data can be moved between the controller and the NAND more quickly (Toshiba didn't disclose the exact speed used on the XG6). The 96L NAND itself has shorter read and program times than the 64L BiCS3 TLC, so the faster interface won't go to waste. The NAND page size hasn't increased, so there isn't any extra overhead for managing small IO sizes compared to what the XG5 has to cope with. As with the XG5, the XG6 will use a mix of 256Gb and 512Gb TLC dies depending on the drive capacity, so the smaller models won't suffer as much from the reduced level of parallelism that would come from using the largest (and cheapest) die across the entire range.

The XG6 is not intended to be a complete replacement for the XG5-P variant that targets higher capacities and sustained performance, but an XG6-P has not been officially announced. However, the XG6 does support user-configurable overprovisioning using a new standard command from the NVMe 1.3a specification, so it has the potential to deliver better steady-state performance than it will provide out of the box.

The XG6 will be available in versions with and without TCG Opal encryption support. The non-encrypting models still implement the basic TCG Pyrite security specification.

The Toshiba XG6 is currently sampling to OEMs and will be showing up in notebook computers soon, replacing the XG5 over the next few quarters. Toshiba never released a retail version of the XG5, but it seems likely that the XG6 will see a retail version to replace the aging and expensive OCZ RD400, which was based on the XG3 OEM SSD.