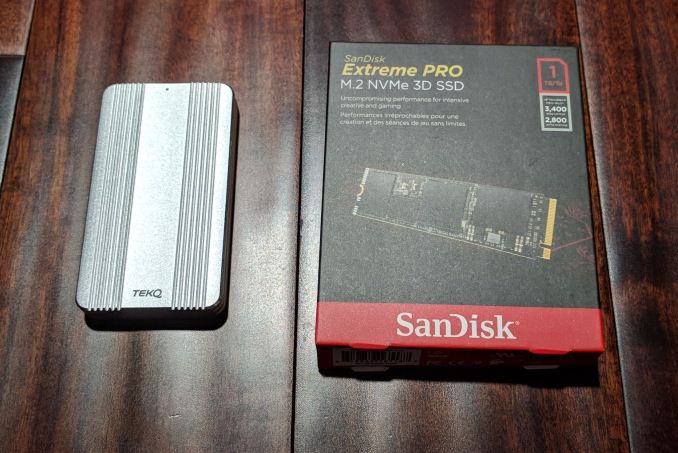 The emergence of NVMe SSDs in the compact M.2 form-factor, coupled with the rising popularity of Thunderbolt 3, has enabled a new class of portable high-performance flash storage devices. External SSDs with a Thunderbolt interface have been around for a few years now, but, the price to performance ratio had prevented them from getting wide acceptance. Things are changing with the portable Thunderbolt 3 SSDs, and wallet-friendly choices are emerging, thanks to Phison's reference designs that went public at the 2018 CES. We recently reviewed TEKQ's Rapide, a portable Thunderbolt 3 SSD using a Phison controller (but, not the 3D TLC-based low-cost reference design). It proved to be quite easy to disassemble. We set out to determine the performance of the Rapide with the internal SSD replaced by one of the current high-performance units in the market - the SanDisk Extreme Pro M.2 NVMe 3D SSD.

The TEKQ Rapide is a 98mm x 45mm x 12mm silver-colored external SSD with an aluminum chassis. It sports a single Thunderbolt 3 interface for both power and data. The port is enabled by the Intel DSL6340 Thunderbolt 3 Controller - note that this belongs to the Alpine Ridge family, and hence, works only with Thunderbolt 3 Type-C ports. On the other side of the DSL6340 is a PCIe 3.0 x4 connection that leads to a M.2 slot capable of accommodating M.2 2260 or 2280 PCIe SSDs. There are no plastic components in the chassis.

There is nothing preventing advanced users from installing their own M.2 PCIe SSDs in the internal M.2 slot. The device is easy to disassemble, with four screws hidden under the rubber feet on the underside of the chassis. We took out the internal SSD (a Phison E7 reference design with Toshiba's MLC NAND) and replaced it with a 1TB version of the SanDisk Extreme Pro M.2 NVMe 3D SSD. The TEKQ Rapide enclosure includes thermal pads for both the M.2 SSD and the Thunderbolt 3 controller. 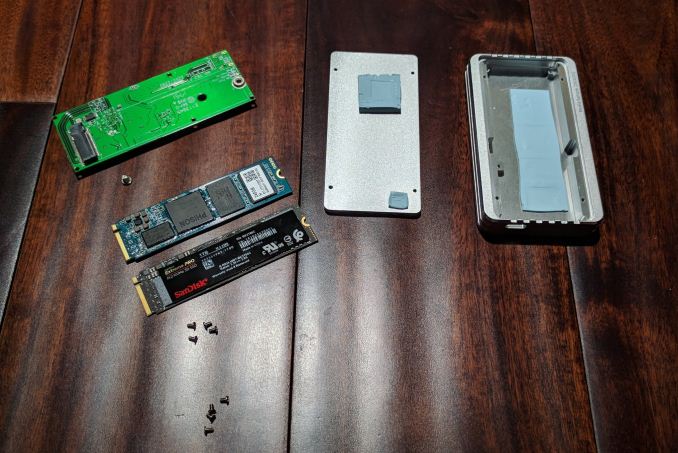 As a refresher, the SanDisk Extreme Pro M.2 NVMe 3D SSD is essentially the same as the Western Digital WD Black 3D NAND SSD (review) except for the external branding. It uses Western Digital's in-house controller and couples it with 64-layer BiCS 3D TLC flash. While the SSD itself claims transfer rates of 3400 MBps reads and 2800 MBps writes, the extent of throttling introduced by the enclosure is not immediately evident.

Various synthetic benchmarks are available to quickly evaluate the performance of direct-attached storage devices. Real-world performance testing often has to be a customized test. We present both varieties in this review, starting with the synthetic benchmarks in this section. Prior to covering those, we have a quick look at our testbed setup and testing methodology.

Evaluation of DAS units on Windows is done with the testbed outlined in the table below. For devices with a Thunderbolt 3 (Type-C interface) connections (such as the DIY TEKQ Rapide - SanDisk Extreme Pro TB3 SSD 1TB that we are considering today), we utilize the USB 3.1 Type-C port enabled by the Intel Alpine Ridge controller. It connects to the Z170 PCH via a PCIe 3.0 x4 link.

The SanDisk Extreme Pro M.2 NVMe 3D SSD's 3.4 GBps / 2.8 GBps numbers for read and write accesses seem to get throttled down to around 2.7 GBps / 2.4 GBps due to the external enclosure, as per the ATTO benchmarks provided below. Unfortunately, these access traces are not very common in real-life scenarios.

CrystalDiskMark, despite being a canned benchmark, provides a better estimate of the performance range with a selected set of numbers.

As evident from the screenshot below, the performance can dip to as low as 40 MBps for random reads at low queue depths. However, peak performance is as good, if not better, than the numbers from ATTO. 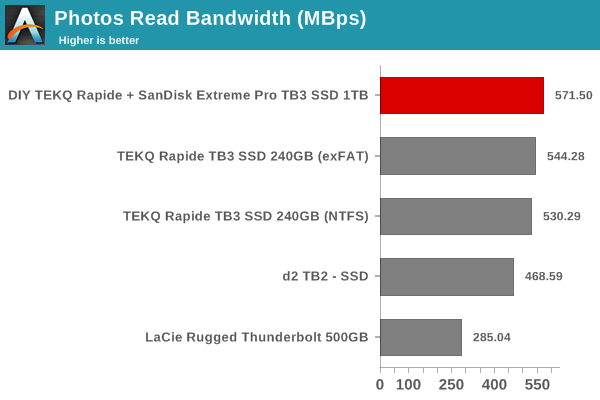 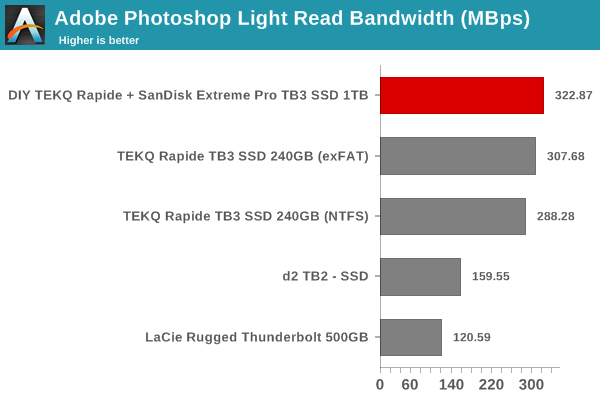 We can see that the SanDisk Extreme Pro M.2 NVMe 3D SSD, when placed inside a TEKQ Rapide enclosure, and formatted in NTFS, is at the top of the charts in almost all the workloads.

Yet another interesting aspect of these types of units is performance consistency. Aspects that may influence this include thermal throttling and firmware caps on access rates to avoid overheating or other similar scenarios. This aspect is an important one, as the last thing that users want to see when copying over, say, 100 GB of data to the flash drive, is the transfer rate going to USB 2.0 speeds. In order to identify whether the drive under test suffers from this problem, we instrumented our robocopy DAS benchmark suite to record the flash drive's read and write transfer rates while the robocopy process took place in the background. For supported drives, we also recorded the internal temperature of the drive during the process. The graphs below show the speeds observed during our real-world DAS suite processing. The first three sets of writes and reads correspond to the photos suite. A small gap (for the transfer of the videos suite from the primary drive to the RAM drive) is followed by three sets for the next data set. Another small RAM-drive transfer gap is followed by three sets for the Blu-ray folder.

An important point to note here is that each of the first three blue and green areas correspond to 15.6 GB of writes and reads respectively. Throttling, if any, is apparent within the processing of the photos suite itself. Here, we can see the first set of photo writes reach higher peak write speeds compared to the other two sets. This has to do with the amount of SLC cache available for filling up during the transfer. However, temperatures are normal (less than 60C) throughout the test, pointing to the thermal solution being very effective.

Western Digital / SanDisk also shipped the SanDisk Extreme Pro M.2 NVMe 3D SSD without any heatspreader. The uncommon layout that places the controller in the middle of the stick with NAND flash memory on both sides of the controller is adequate to prevent overheating, and the thermal pads on the TEKQ Rapide chassis are more than enough to prevent the SSD from going above 60C in the course of our heavy DAS workload.

The Thunderbolt 3 specifications indicate that the host port must be able to supply up to 15W for bus-powered devices connected to it. Since the TEKQ Rapide is a bus-powered device, it is given that its power consumption can't exceed 15W in order to be a certified Thunderbolt 3 device. It is still relevant to take a fine-grained look at the power consumption profile, since the SanDisk Extreme Pro M.2 NVMe 3D SSD we are putting in has a very different performance and power profile compared to the Phison E7 reference design that it originally shipped with. Using the Plugable USBC-TKEY, the bus power consumption for the unit was tracked while the CrystalDiskMark workloads were processed. The workloads were set up with an interval time of 30s. 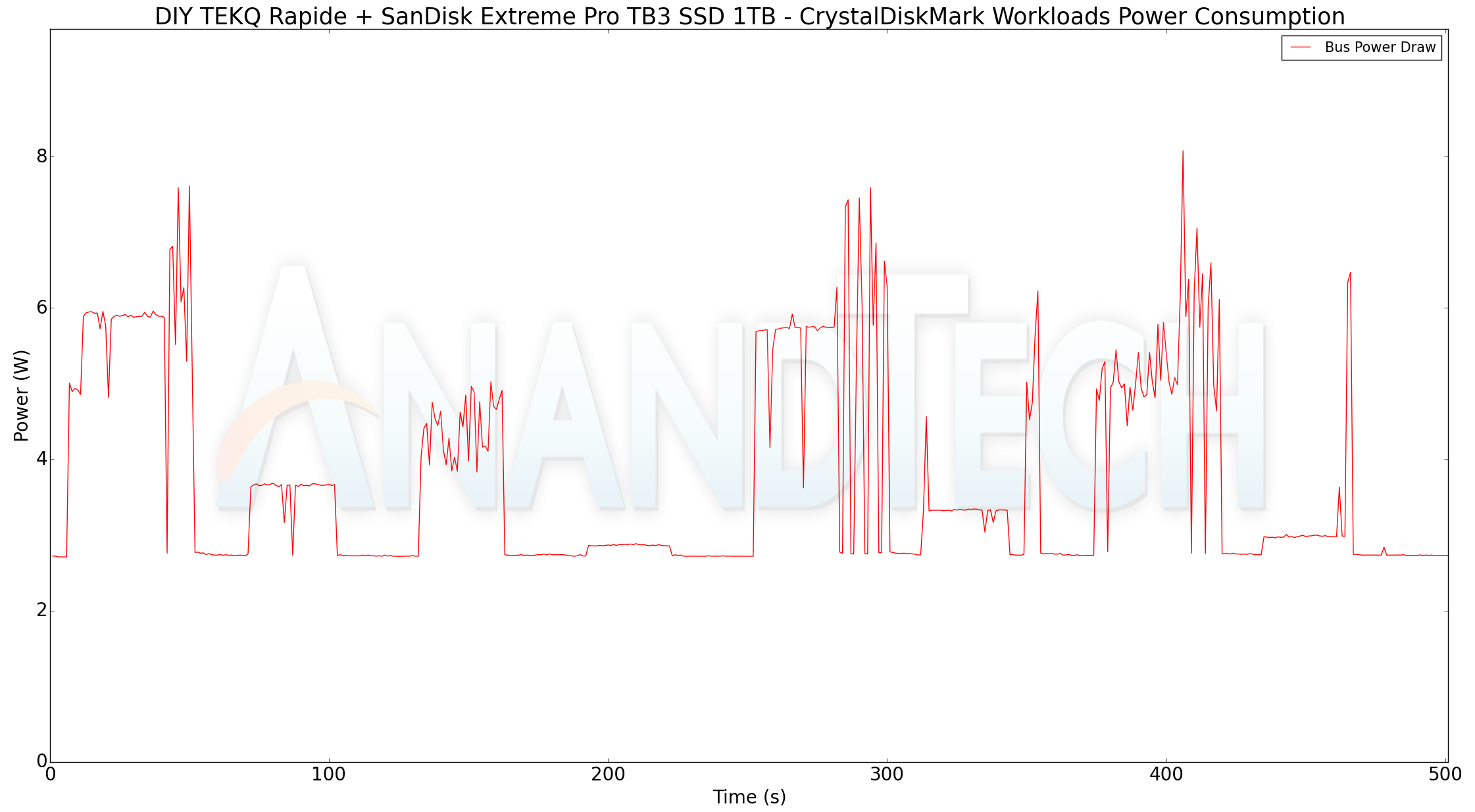 We find that the peak power consumption is slightly south of 8W (compared to the sub-7W profile of the 240GB Phison E7 reference SSD in the TEKQ Rapide). The SSD idles at around 2.8W (compared to 2.5W of the original configuration).

Support for TRIM is an important aspect - it ensures that performance consistency is maintained even after the SSD has been subject to long-term use. Since the Thunderbolt interface is transparent for all practical purposes, and the host OS sees a PCIe NVMe SSD, it comes down to the SanDisk Extreme Pro M.2 NVMe 3D SSD supporting TRIM. We were able to successfully activate TRIM with the configuration.

The final aspect that we deal with in the review is the pricing. Since we have a DIY configuration, the 'build' involves buying the TEKQ Rapide enclosure with the minimal capacity SSD, and re-using the internal SSD for some other purpose. The cost breakdown is presented in the table below.

Flash prices are on a downward trend, and it is likely that the configuration will become cheaper in the coming months. Even without discounting the extra NVMe SSD's cost, the price per GB comes to a respectable $0.64/GB, which is cheaper than the approx. $0.80/GB for the 1TB TEKQ Rapide SSD. That said, the cost is not as economical as what has been promised for the upcoming Phison reference designs for portable Thunderbolt 3 SSDs (in the range of $0.45 to $0.50/GB for the 1TB variants). However, they are not expected to provide as much performance as our DIY configuration. 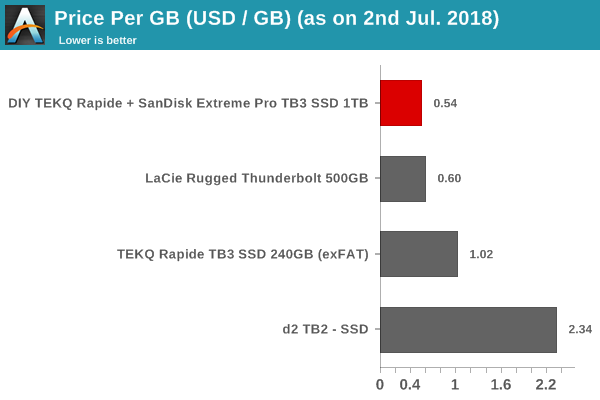 At the business end of the review, we can say without hesitation that the DIY Thunderbolt 3 SSD presents a very valuable proposition to the end user. In particular, the TEKQ Rapide can leave the consumer with a spare 240GB NVMe SSD that can be used in the recent NUCs or a number of other modern PC platforms. The WD Black / SanDisk Extreme Pro SSDs have great performance for DAS workloads, and team up effectively with the TEKQ Rapide enclosure for a high-performance portable Thunderbolt 3 SSD that doesn't break the bank.