Today, Dell announces a notebook that marks their entrance into the enthusiast market (particularly if you know the code name). Dubbed the Dell Inspiron XPS, it is suppose to be the mobile version of the desktop Dimension XPS system.

The significance of this particular notebook is two fold. First, Dell has a much easier time to go after the enthusiasts in the mobile market over the desktop because overclocking is understood to be nonexistent. A Dimension XPS system, meanwhile, provides limited options for the enthusiast that could just as well built one from the ground up with a wider range of performance enhancing options (RAID, overclocking, etc...). Considering the branding behind the Dell name and the expectations behind an enthusiast notebook, the Dell Inspiron XPS already has a good head on its shoulders. This will likely to appeal even to the general prospective desktop replacement owner.

Secondly, Dell is also warming up to the concept of upgradeable notebooks (only sought out by Alienware thus far); the most obvious step being in the system's GPU configuration. With the Inspiron XPS system, Dell is starting to standardize their modular graphics format, which means that Inspiron XPS owners down the road can upgrade their graphics card. Keep in mind that modular graphic formats aren't the same among the different system vendors and even between model lines of a single system vendor.

Upgradeable graphics isn't a new thing for Dell, as this was possible with the Inspiron 8600, but technically those were "black-market" cards that you were swapping in and out, since Dell wasn't publicly providing the upgrade option. *Though, some of you readers have told us that you managed to upgrade through Dell's spare parts ordering service.*

The problem with upgradeable graphics also comes down to be a support issue. The last thing Dell wants is a misinformed user purchasing a new mobile graphics card and sending back the entire system because they weren't satisfied with performance. In order to avoid the onslaught of RMAs, technical support calls, etc..., Dell is providing the option of upgrading graphics through them only. Basically, a Dell support guy will come out to your house (you can also go into one of their support stores I believe) and will swap out the old card and install the new drivers and everything to make sure everything is copasetic. 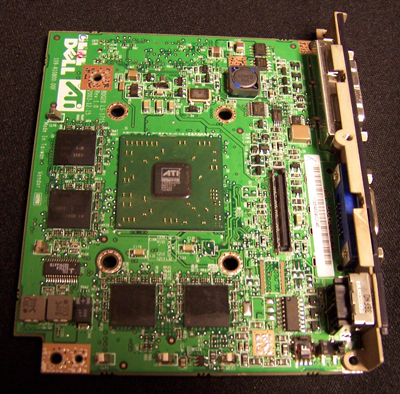 The form factor of the modular graphic card in the Inspiron XPS system is fairly simple. The top side of the XPS graphic module is home to the discrete mobile GPU, while the edge of the card is home to the s-video, DVI-I, and VGA ports. These are visible from the back side of the system, seen in the picture above. In a sense, it is similar to a PCI type design. Traditionally, modular graphic cards on notebooks interfaced with the motherboard and the system's VGA port was accomplished via additional PC traces. Obviously, the first iteration of the Inspiron XPS system will come with the Mobility Radeon 9700. The fact that Dell is going to allow for upgradeable graphics tells us that the Inspiron XPS system or its graphic's form factor will have a fairly long life cycle.

We won't bore you with the details you can get from the press release, but we already have a very good impression of the system (despite it weighing in at 9 pounds), particularly already having kind of tested out the waters with a beta system. The beta system we tinkered around with used a 2.8GHz Prescott, which we aren't even sure is from a final silicon batch. It doesn't really matter since it doesn't look like it will be shipping at this speed. For this reason, the benchmarks from this system are more or less moot, but we will get around to benchies soon...

Basically, it looks like an Inspiron 8600 on an elevated platform. The 15.4" WUXGA screen we saw on the beta system was stunning and more brilliant than the 8600, which quite frankly was already a great system to begin with... We have high expectations, so stay tuned.

Btw, you can thank the boys and girls at Dell for the nice high res shots that they whipped up just for you guys, otherwise this would be 100% text...