Intel also reports Non-GAAP results, which exclude several expenditures, such as acquisition-related adjustments, write-downs, and the like. On a Non-GAAP basis, Intel had a gross margin of 63.1%, down 1.7 points, an operating income up 11% to $4.9 billion, and a net income up 4% to $3.9 billion. Non-GAAP earnings per share were up 4% to $0.79.

The gross margin impact is being attributed to a few things. Warranty and IP charges increased, as did spending on factory start-ups, due to the move to 10 nm coming this year, Client Computer Group non-platform costs, and the Non-Volatile Memory Solutions Group margins. Intel very much likes to keep their margins up above 60%, and for the moment they are still there even with these extra costs. 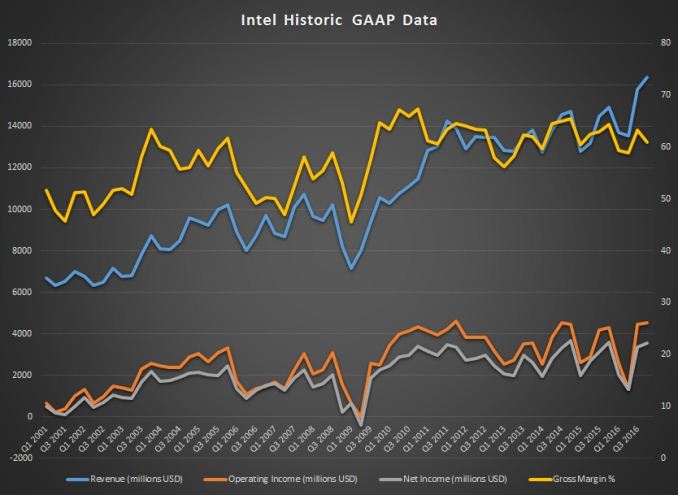 Intel breaks the company down into several groups. The main group is the Client Computing Group, which as the name implies, provides CPUs, SoCs, and wireless and wired connectivity products destined for PCs. Although the PC market is still down, this group had revenue for the year of $32.9 billion, which is up 2%, but platform volume is down 10%. Platform selling prices were up 11%, which makes up the difference. For just the last quarter, Client Computing Group had revenues of $9.1 billion, up 4% from a year ago. Platform volumes were down 7%, offset by selling prices up 7%. Desktop platform volume was down 9%, while notebook volumes were flat. Desktop average selling price (ASP) was up 2%, and notebook ASP was up 3%. Considering the down market, Intel continues to drive revenue here. While good for them, it means prices are high, and some competition in this space might help out the consumer.

Intel is slowly building it’s Internet of Things group, which had revenues for the year at $2.6 billion, up from $2.3 a year ago. Revenue for this quarter was up 5% to $726 million. The Non-Volatile Memory Solutions group had revenues for the quarter of $816 million, up 26% from a year ago, and a full-year revenue of $2.58 billion, down slightly from the $2.6 billion a year ago. Programmable Solutions is new for Intel this year, with the purchase of Altera, and this segment had revenue of $420 million for this quarter, and $1.7 billion for the year. All other revenue was $65 million for the quarter, up from $59 million a year ago.

2016 was a strong year for Intel, although it was not without its challenges. Earlier this year, Intel decided to get out of the mobile SoC space completely, abandoning it’s Atom architecture for this segment. Atom does live on for low power PCs, but any of the tablets that used the Cherry Trail Atom have found themselves without a new CPU to move to. The death of Tick-Tock also had its first new entrant in Kaby Lake, although you could easily argue Devil’s Canyon was a similar situation. But they have several new exciting technologies coming to market as well, such as 3D X-Point, and of course the expected launch of their 10 nm CPUs later this year.

Looking forward to Q1 2017, Intel is forecasting a midpoint revenue range of $14.8 billion, with margin estimates at 62%.