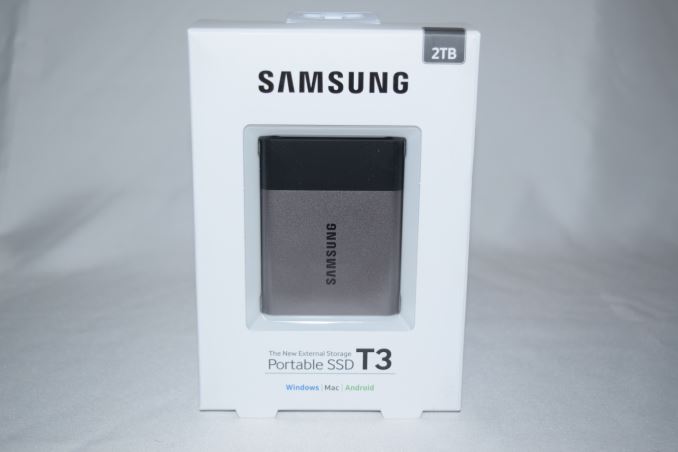 The last few years have seen rapid advancements in flash technology including planar 1x nm NAND, TLC, and 3D V-NAND. External high-speed interfaces such as USB 3.x have also become ubiquitous. The advent of Type-C has also enabled device vendors to agree upon a standardized connector for their equipment (be it mobile devices or desktop PCs). These advances have led to the appearance of small and affordable direct attached storage units with very high performance for day-to-day data transfer applications.

There are plenty of options for high-capacity thumb drives, but the form factor brings in performance limitations. Therefore, vendors such as Samsung and SanDisk have decided to go in for palm-sized bus-powered units connecting to the host with the help of a cable. Samsung's Portable SSD T1 was released at CES 2015. The Portable SSD T3, announced at CES 2016, builds upon the market success of the T1 and comes with four main improvements:

The T3 units are slated to become available in the market towards the end of February, but Samsung provided the press with early samples.

The T1 was based on the 850 EVO (same 32-layer TLC V-NAND with a full-fledged MEX/MGX controller coupled with an ASMedia ASM1153E SATA to USB 3.0 bridge). However, the T3 is a bit of a puzzle, since the only 2TB variants we have had from Samsung are the 850 EVO and the 850 PRO. These 2TB variants both use eight 16-die packages (with the only difference being the MLC V-NAND in the Pro to the TLC V-NAND in the EVO). Accommodating eight flash packages in the footprint of the T3 seems like a big stretch, but, before we get into the internals, let us take a look at the insights provided by CrystalDiskInfo. 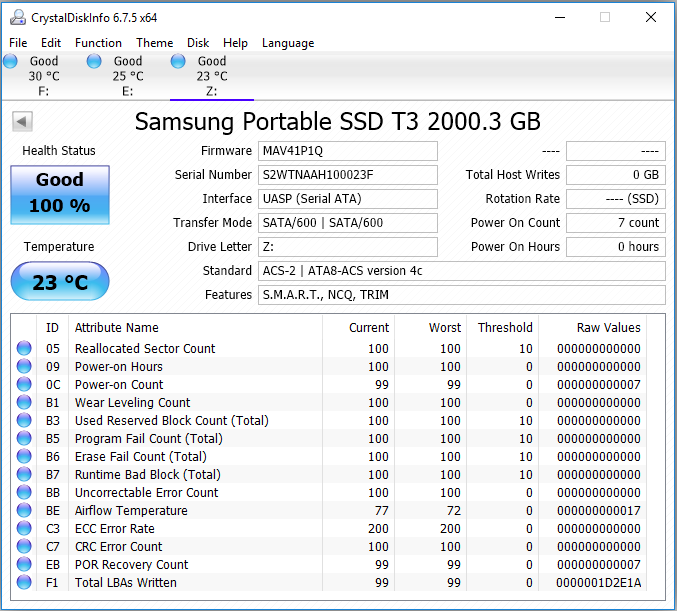 Even though CrystalDiskInfo reports TRIM as a feature, the quick TRIMCheck program pointed to TRIM availability being indeterminate. In any case, Samsung also doesn't make any claims about TRIM support. S.M.A.R.T data was not visible to most of the commonly used tools. On the USB 3.0 side, the drive supports UASP (USB-attached SCSI Protocol) that should provide increased performance for sequential transfers. Claimed transfer rates are 450 MBps for sequential accesses. We also have hardware-accelerated AES-256 encryption.

In the rest of this section, we will take a look at the internal hardware followed by some usage impressions (particularly from the viewpoint of a DAS unit for an Android device).

Compared to the T1, the T3 is much more easy to disassemble. This is not something that any end-user would really care about, but it definitely revealed some interesting information. The process involved peeling off two stickers and taking out four screws. Various pictures from our disassembly process (including shots of the heavy thermal protection) are available in the gallery below.

The last picture in the gallery shows the ASMedia 1153E SATA to USB 3.0 bridge chip (also used in the T1), as well as the ASM1542 10Gbps signal passive switch (used to enable the Type-C interface). The more interesting components are the controller and the flash packages. While the controller (S4LN062X01) seems to be the standard MGX controller used in the 120 - 500GB 850 EVO drives, there are only four flash packages in the system. 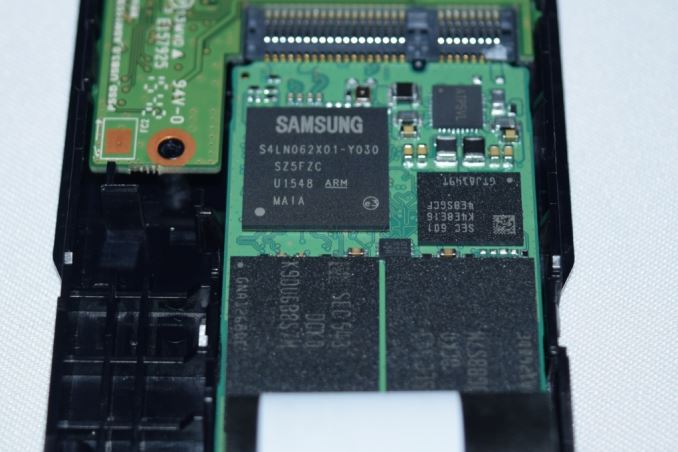 Given the 2TB capacity, it is clear that we are looking at flash packages that have not been used in any other publicly available Samsung storage device till now. 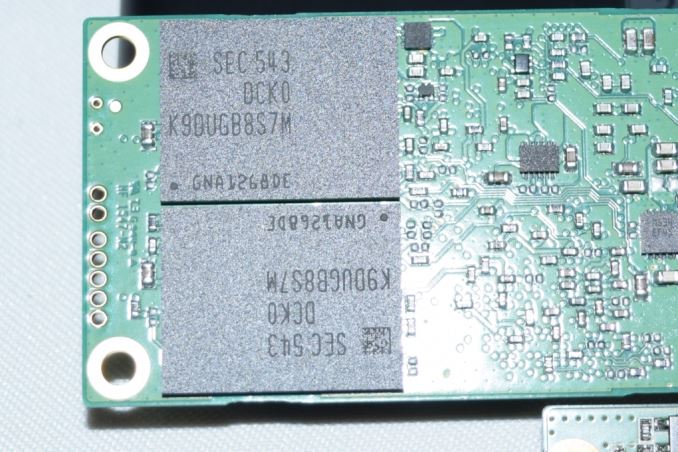 Maybe a bit too much flash on the flash?

The flash packages carry the marking K9DUGB8S7M. Since each package has 500 GB of flash, there are three possibilities:

Without any further details from Samsung, our educated guess is that (c) looks to be the most likely option. The first clue is the pricing. At $850 for 2TB ($0.425/GB), it is not the cheapest external SSD around. The cost per GB is higher than that of the T1 (which launched at $0.60/GB and has now moved down to around $0.34/GB). This leads us to suspect that this is the latest generation TLC V-NAND. An external device like the T3 would allow Samsung to first ship the flash in a low-volume, high-profit part, and then ramp it up for consumer SSDs.There is also less concern about performance and endurance compared to the requirements in internal SSDs. Samsung had also talked about 256 Gb 48-layer TLC V-NAND mass production at FMS last August, and the flash packages in T3 look most likely to be based on that. UPDATE: Samsung confirmed that the NAND used in the Portable SSD T3 is indeed 48-layer 256 Gb TLC V-NAND.

Unlike the T1 which came pre-partitioned with a 128 MB FAT32 volume and the rest of the capacity formatted in exFAT, the T3 has only one exFAT partition. Samsung's Portable SSD program can be installed on the PC to enable or disable security (the AES-256 option) as well as to enter the password for drives that have had a password set through another device. We saw in our T1 review that the encryption is done in hardware, and there is no performance penalty. Since the claimed performance numbers are also not different from the T1, we benchmarked the drive with the encryption disabled.

Coming back to the usage aspects, the exFAT volume is available without installing any special programs on both Windows and Mac OS systems. Linux users might need to install an external package to get exFATsupport. Though Samsung claims Android support for the unit, it is only for the encryption aspect. The Portable SSD app allows users to enable / disable / unlock the encryption (security) on a drive.

We attached the T3 to a Huawei Nexus 6P using the Type-C to Type-C cable that came along with the phone. There was no trouble accessing the drive on the phone. 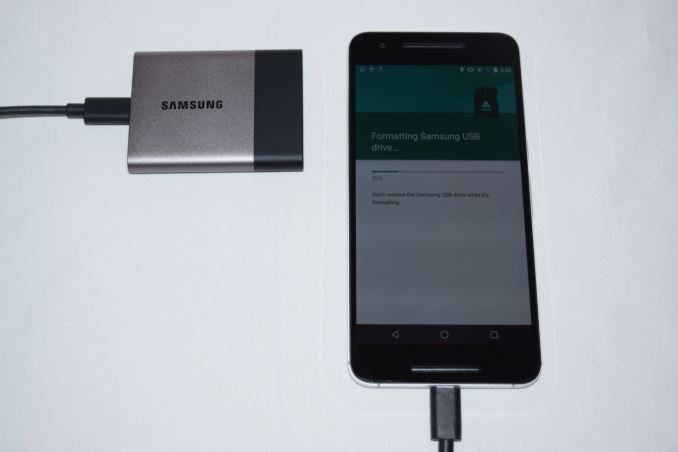 The only caveat is that Android doesn't support exFAT. I thought Samsung's Portable SSD app would enable exFAT support, but that is not the case currently. Anyways, the Nexus 6P force-formatted the T3 in FAT32, but, after that, there was no issue in transferring data between the phone and a PC using the T3.

On the whole, the user experience with the T3 was definitely better than what we had with the T1 at launch. Android compatibility is nice to have, but we would definitely like Samsung to provide exFAT support through the Portable SSD app. In the next section, we will describe our testbed setup and testing methodology for the Samsung Portable SSD T3 unit.