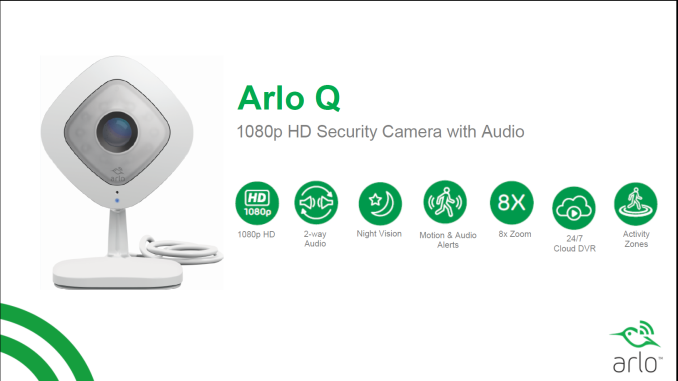 Netgear's push into the consumer IP camera / smart home space began with the Arlo Wire-Free cameras launched last year. The first generation Arlo cameras aimed at addressing the major pain points associated with consumer IP cameras - location restriction close to a power source, measures needed for protection from the elements in outdoor locations, and the need to run an Ethernet cable for connecting to the network. By being weatherproof, battery-powered, and transmitting video over Wi-Fi to a base station only when motion was detected, it delivered enormous flexibility to consumers.

Netgear had an interesting slide to share with respect to the market share status of the Arlo. 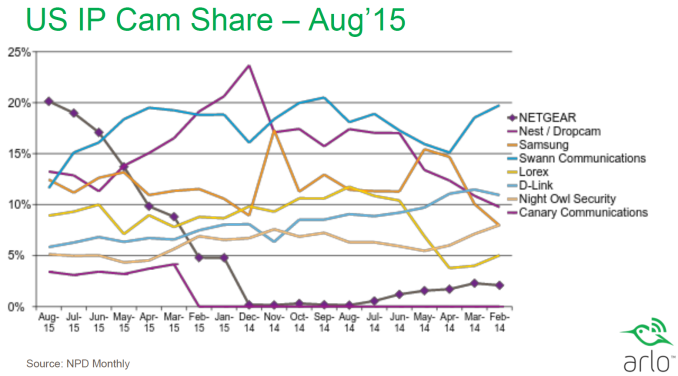 Within 6 months of introduction, the Arlo managed to climb up to the top of the charts with a 20% share (also helped by Dropcam making a slow transition to the new Nest Cam model). This shows that there is a tremendous market potential for battery-operated IP cameras (something we had not foreseen when the Arlo Wire-Free was launched).

IP cameras such as Nest Cam (Dropcam) and D-Link's myriad offerings also enjoy success in the market because they address use-cases for which the Arlo Wire-Free isn't suitable:

Netgear is introducing the Arlo Q today to address some of these issues. It is intended to be complementary to the Arlo Wire-Free model that will be continue to be sold concurrently. 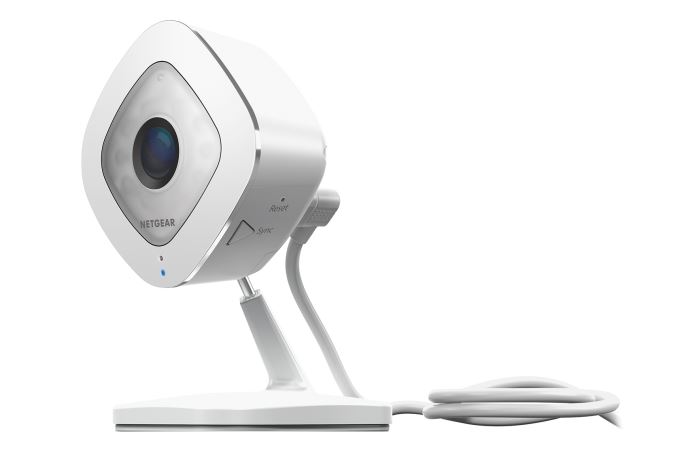 The hardware aspects of the Arlo Q are summarized below:

Compared to the Nest Cam (which supports only live viewing of the video stream for free, but requires a subscription for cloud recording), Netgear provides seven days of rolling cloud recordings for free (based on motion or audio events). Continuous Video Recording (CVR) is available either on a 14-day or 30-day rolling window plan with the service rates varying depending on the duration as well as the number of cameras in the plan. Note that a subscription is not an essential requirement to take good advantage of most of the capabilities of the Arlo Q. 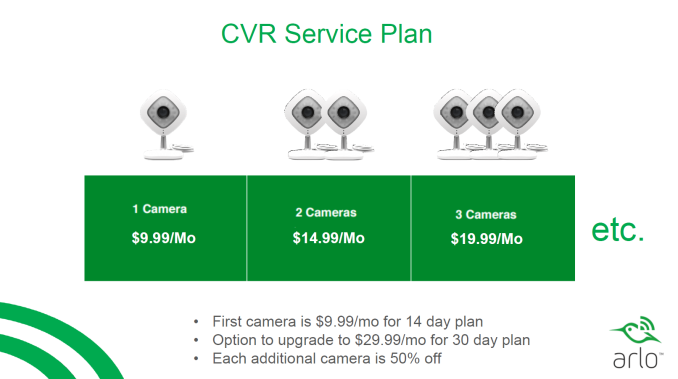 We have generally been wary of recommending smart home products that rely purely on the cloud for operation. While the Arlo lineup is currently heavily dependent on the cloud (just like the Nest Cam), Netgear did assure us that they had no qualms in enabling local recording of the video stream (either to storage attached to the Arlo hub or a ReadyNAS unit in the same local network) sometime in the future. Apparently, the main concern is the security of the video stream. Given the 7-day free recording feature, it is clear that Netgear is not relying entirely on the CVR feature to drive the revenue up for the product (which is good for the consumers).

Netgear also indicated that the Arlo Q and the current Nest Cam both use SoCs from the same vendor, with the one used in the the Arlo Q being the next-generation version of the one in the Nest Cam. Given this information, it is likely that the video quality as well as the streaming bitrate will be similar to (or better than) the one from the Nest Cam. It is great that the market will get a more consumer-friendly alternative to the Nest Cam, though we would be more enthusiastic if Netgear had the local recording capabilities ready at launch time. The Arlo Q (VMC3040) will be available in December 2015 and have a MSRP of $220.