The ASUS Republic of Gamers G751 Review: G-SYNC Comes To The Notebook Computer

Notebook design decisions can make a big impact on the overall user experience. Make a device with high power components too thin, and the cooling system will have to work pretty hard to keep everything cool. Too thick, and it can be uncomfortable to use and difficult to move around.

Meanwhile on the styling side, this is really a matter of personal preference. The Pontiac Aztec crossover, which the Globe and Mail named as the ugliest car of all time, sold over 100,000 units in the USA alone during its short life. That’s not to say that the ASUS G751 is anything like the Aztec (at least in my eyes) but more to say that styling is very personal, and what one person loves another might hate. 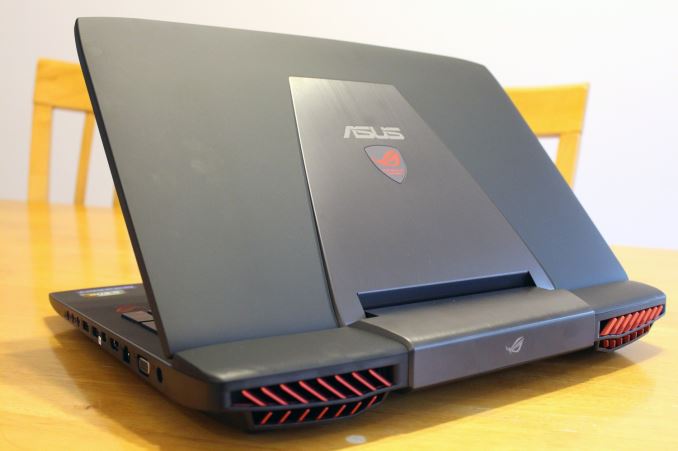 The ASUS G751 is all matte black plastic on the interior and exterior, other than a trapezoid of brushed aluminum on the top with the ASUS and ROG logos. The ROG logo lights up in red, which is the accent color for the large rear exhaust vents, and the keyboard backlighting as well. It is nicely executed, and if you are a person who likes a bit more of a statement with your laptop, the G751 certainly delivers some of that. If you prefer an understated look, then you may have to shop elsewhere, although the goal of a device such as this is to be sat on a desk, and the more outlandish design elements such as the red exhaust vents are less noticeable.

The build quality of the G751 feels pretty solid, despite the plastic exterior. The finish does not attract fingerprints either, which is a nice bonus. On the left side is the optical drive along with two USB 3.0 ports and a SD card reader, and on the right side are two additional USB 3.0 ports, video outputs (HDMI, mini DP, and VGA), along with a 3.5mm SPDIF jack, 3.5mm microphone jack, and 3.5mm headphone jack. There is even a 1 Gbps RJ-45 port on the right side, along with the power input. The G751 has pretty much all of the bases covered.

The underside of the notebook has a couple of intake vents in the center, along with a removable cover to gain access to the DRAM and storage in order to allow for future upgrades. There’s also a small subwoofer to compliment the stereo speakers which are actually at the rear of the notebook in the exhaust vents. The four large feet are actually plastic with no rubber coating, but the large mass of the device keep it from sliding around.

Once opened up, the keyboard is front and center. As with most large notebooks, it includes full sized directional keys along with a number pad. There are also dedicated keys for game streaming (with XSplit Gamecaster pre-installed for this purpose), Steam, ROG Gaming Center, and three macro keys. The layout works pretty well, but it would have been nice for ASUS to move the up arrow over a bit in order to make room for a full sized zero key on the number pad. The keys themselves have decent travel and good feel. If anything, I would have liked a bit more key travel considering the thickness of this notebook. The keyboard backlighting looks nice in red, but the red fonts on black keys results in some pretty poor contrast when the backlighting is turned off. 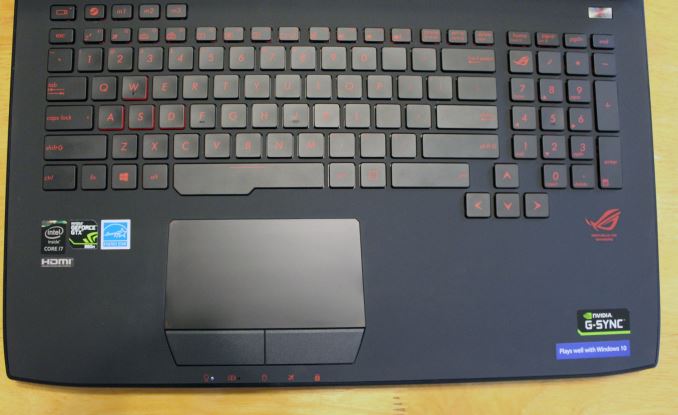 The trackpad is very large, and incredibly smooth. The included software supports up to three finger navigation. There are two nice and large buttons beneath the track pad for left and right click, and you can set the trackpad to automatically be disabled when a mouse is plugged in. In front of the trackpad are five status lights for drive activity, battery charging, power status, and num lock.

The overall design of the ASUS G751 is solid, with good construction, easy access to upgrades, and pretty much every port you could ever need. Stylistically, as I said it is personal preference, but I’m not a huge fan. I feel like there is a disconnect with how the laptop looks when using it, and when you look at it from the rear, where the large red vents try to portray a stealth fighter. I do like the touch of aluminum on the top, and especially with the traditional ASUS brushed look, but it sort of feels out of place with the rear of the laptop. However, the large vents can play an important part in overall system cooling so I will re-evaluate after we take a look at how it performs.