For our review of the HTC One M9, we received our review unit a week ago. However while neck-deep in putting the new phone through its paces, HTC unexpectedly released a major software update for the phone on Thursday, replacing the previous non-final version of the phone’s software with the final version. We’ve had these sorts of last-minute updates before, they generally are focused on bug fixes and wrapping up minor issues. This was not the case for the One M9.

Instead Friday’s software update introduced significant changes to the phone’s power and temperature management capabilities, which in turn has introduced a significant changes in the phone’s performance. HTC’s notes on the matter are very brief – updates to the camera, the UI, and thermal throttling – in practice it appears that HTC has greatly altered how the phone behaves under sustained loads. Our best guess at this point is that HTC appears to have reduced the maximum skin temperature allowed on the phone, which means that for short, bursty workloads that don’t approach the maximum skin temperature the changes are minimal, but for sustained loads performance has gone down due to the reduction in the amount of heat allowed to be generated. 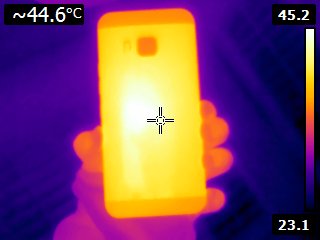 Case in point, our GFXBench 3.0 battery life results were significantly altered by the update. With the initial version of the phone’s software we hit 1.73 hours – the phone ran fast but almost unbearably hot – and after the software update the One M9 is over 3 hours on the same test with a maximum temperature of 45C, a still-warm but certainly much cooler temperature, as seen in the photo above. And none of this takes into account the camera changes, which so far we are finding to be similarly significant. It has made the One M9 a very different phone from when we started.

Consequently we’ve had to start over on many of our tests for this review, not all of which we’ve been able to complete in time for HTC’s embargo date. For this reason we’re splitting up our review into two parts, with today’s article focusing on the phone’s build, the UI, and what performance numbers we’ve been able to collect after the software update. The forthcoming part 2 will in turn look at the rest of our performance numbers – including a complete workup on new battery life numbers – along with the camera and our final thoughts on the phone.

Ultimately we’re still coming to grips with this software update, but bug fixes aside, the performance and camera changes are likely going to make this a better phone. However it means that early performance numbers are not going to be applicable, so it’s important to make a distinction between pre and post-update numbers, and any early leaks about the phone have likely been rendered obsolete by this software change.

One of the most important aspects of any mobile device is battery life. After all, if a smartphone or tablet spends most of its time plugged into the wall rather than running off of battery it isn’t really mobile at all. As a result, testing battery life is equal crucial to any review. In order to do this properly, we standardize our display testing to have an average of 200 nits across the entire display, which helps to ensure that we’re making valid relative comparisons for battery life. Our battery life tests now span a wide range of use cases as well, from a light web browsing case to intense gaming and computation cases. For 2015, we’re also adding PCMark’s battery life test in order to look at a mixed use case that stresses the CPU more strongly than our current web browsing test, but not enough to be power virus like Basemark OS II. 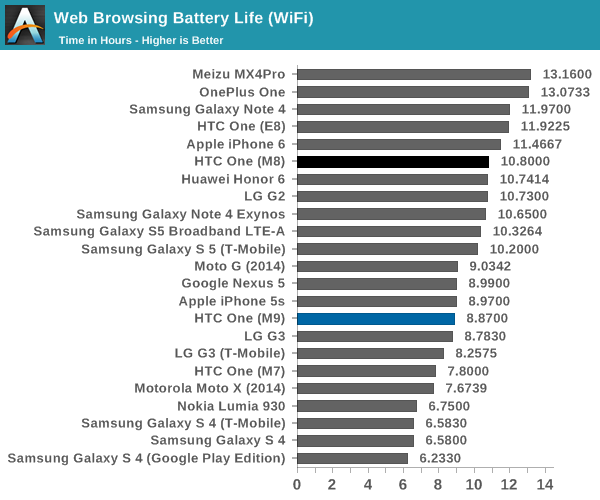 The first result that we’ll look at is web browsing on WiFi. To say the least, the M9 posts a result that is a concerning regression from the M8 in this area. Although the One M9 does use the BCM4356 WiFi chipset, it’s highly unlikely that this is the reason why battery life regresses around 18% when the battery is now 9% bigger. Doing some quick calculations would mean that the M9 consumed about an average of 1.22 watts throughout the test. The M8 consumed about an average of .91 watts throughout the same test. This represents a 33% increase in power consumption that has to be accounted for. As far as I can tell, there are really two possible contributors to this increase in power consumption. The first is that there’s no longer any sort of panel self-refresh, which is likely due to the increased cost associated with integrating additional RAM to support a MIPI command mode panel. Going off of LG’s data for PSR, we can expect to see a 26% reduction in power consumption for the display when using an idle image, so this is probably a significant contributor to the test results. The other area where we could be seeing regressions is from the Snapdragon 810’s CPU efficiency, but it would be somewhat amazing if that was really the case. 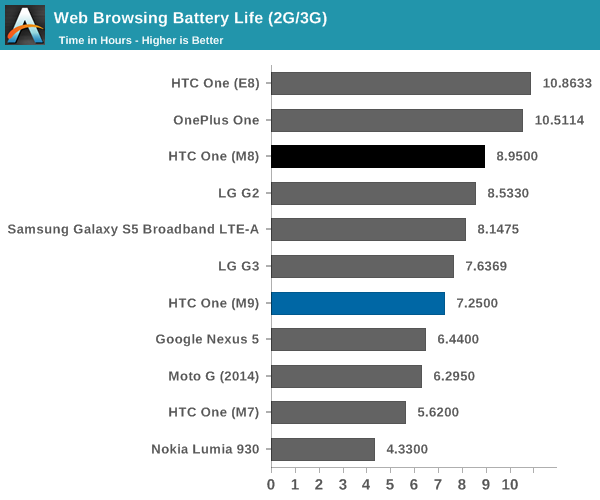 Running this same test on HSPA+ actually increases the gap in efficiency between the M8 and M9, but the difference is around 5%. Subjectively, this test actually made the M9 start to get warm in the hands, with skin temperatures of around 30 to 40 degrees Celsius, which is a bit concerning as I don’t recall the same being true for the M8.

We'd normally go into depth about the PCMark, GFXBench, and Basemark OS II battery life results at this point but the new software update precludes this from happening at all as all three could be significantly impacted by changes to thermal throttling. In GFXBench, I saw a change from 1.73 hours to around 3 hours of battery life on our infinite T-Rex rundown test, and in PCMark I noticed that the M9 reached about 40C, which brings it close enough to the new update's maximum skin temperatures that all three tests must be re-done.

While battery life is important, charge time is often a significant aspect of mobility. Portable battery packs and swappable batteries can help to alleviate this problem, ultimately it’s a pretty safe bet that at some point the time it takes to charge a battery will make a very real difference in practical battery life. Layover flights are probably the best example of this, as in the time spent in a connecting airport often allows for some charging time, and fast charging will often make the difference between barely having enough battery for the trip and having enough to not worry about using the phone for non-essential tasks. To this end, HTC equips the One M9 with the ability to use Qualcomm’s Quick Charge 2.0 spec, but the charger in the box is a rather conventional 5V, 1.5A adapter which doesn’t take advantage of Qualcomm’s QC 2.0 spec. Because most users aren't going to go out and buy another charger for their phone, we tested against the included charger in the box. 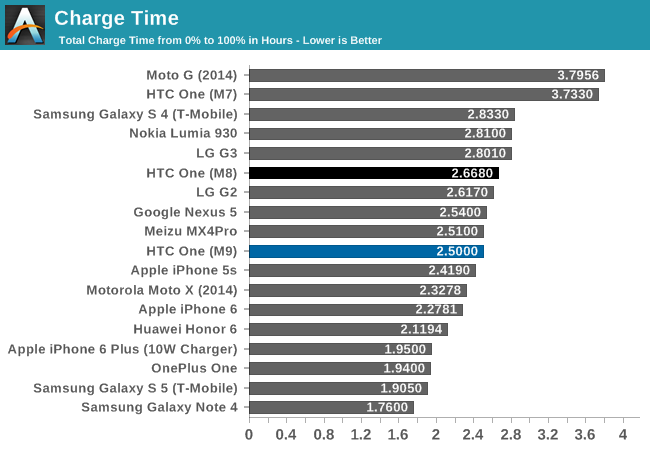 As one can see, the result is that the One M9 ends up with effectively the same charge time as the One M8, which isn’t a surprise because they both have rather similar battery capacities. The charger included in the box is also of a similar spec, which places an upper bound to maximum possible charge rate. Overall, one wouldn’t really find much to complain about in terms of charging rate, but holistically speaking the One M9 is simply less mobile than the One M8 in a significant way, which is disappointing to say the least.