The story of Antec of the past few years has been rather curious. Five years back, it seemed like just about everyone was using Antec cases and power supplies… and then suddenly things got quiet. The company was still around, but either marketing just wasn't a focus or the increased competition from small and hungry companies pushed them out of the spotlight. I'm not privy to all the details of what may have been going on behind closed doors, but when Antec invited me to stop by during CES I was certainly curious to see what the company had to show. Most of it is what you'd expect from a company generally associated with cases and power supplies, but it will be interesting to see if they can recover any of their former glory. 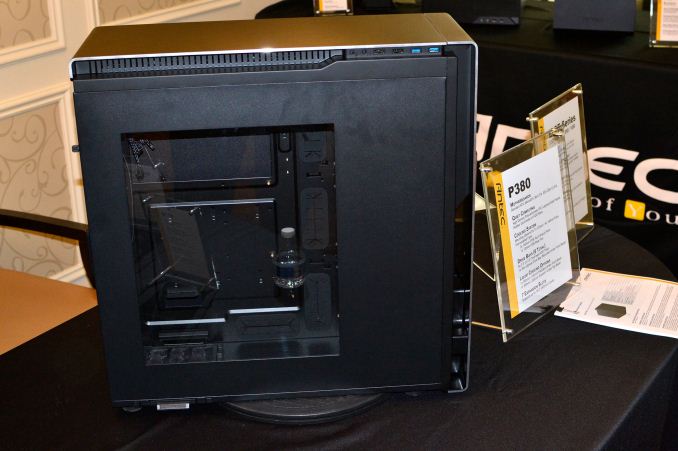 Starting with cases, Antec had several designs on display. First and most impressive is the P380, their latest halo product. It has thick (4mm) aluminum wrapped around the front and top of the case, with noise reduction foam on the side panels, tool-less drive bays, a fan hub, support for multiple radiators (up to 3x120mm on the front and top), and basically every other high-end feature you care to name. It drops most support for optical drives, though there is room for a slim ODD option. It includes three 120mm fans with mounts for four more. This is intended to carry the torch from the P180, which is still well regarded years after launch, with a price to match. It should retail for $249 with availability expected in March. 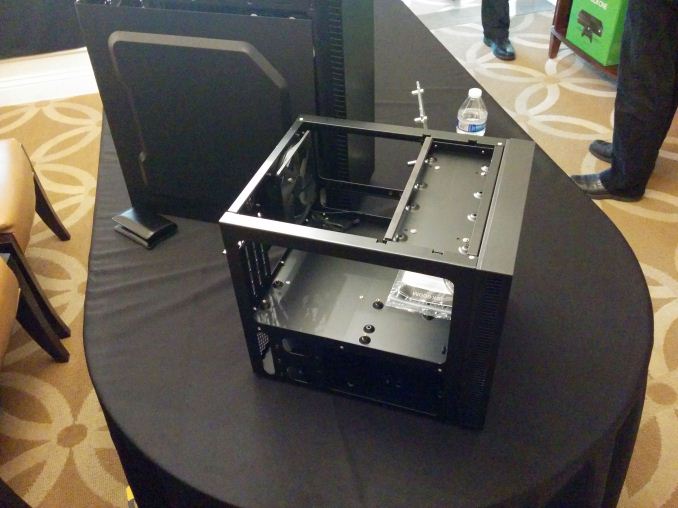 Next up is the ISK600M, a recently launched Micro-ATX/Mini-ITX "cubic" case that's basically the upsized version of the Mini-ITX ISK600. It comes with top and bottom internal compartments to separate the PSU and drives from the motherboard and expansion cards. The power supply goes on the bottom and the case has support for three 3.5" drives, three 2.5" drives, and there's a slim ODD bay as well at the top (which could also be used as a fourth 2.5" bay). The top portion houses the motherboard and expansion cards with four expansion slots. Cooling is provided by up to four fans (120mm on the rear, an optional 80mm on the rear, a 140mm intake at the front, or the front fan can be replaced with an optional 2x120mm configuration). The case measures 273mm x 340mm x 290mm (WxDxH), with clean and minimalist styling that should stand the test of time. I've seen reviews of the case mostly from European sites and I can't seem to find any major resellers in the US, but hopefully that will change in the near future. I expect the price to be around $80-$90, or about $20 more than the ISK600 (which is available for $60 online). 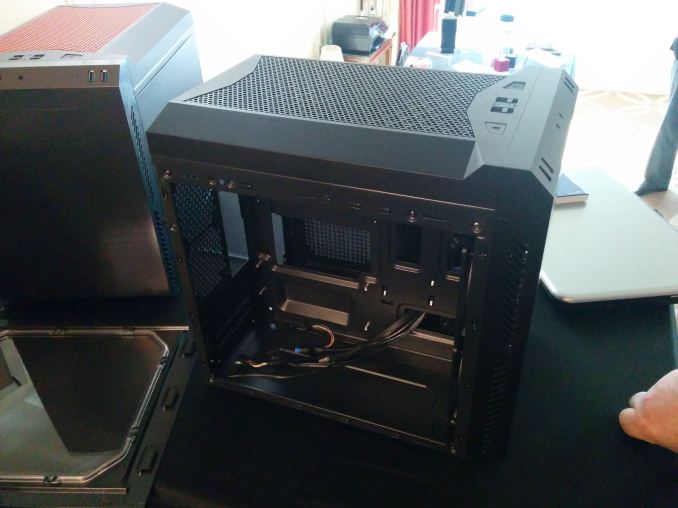 Next up, the P50 is similar in some ways to the ISK600M but with vertically split compartments – or if you prefer, it looks a lot like the Corsair Carbide Air 240. This is designed to be more of a budget-friendly Micro-ATX/Mini-ITX case and it uses slightly downgraded materials (e.g. plastic front fascia and thinner metal sides). It can fit two 2.5" drives, three 3.5" drives, and a 5.25" external bay is available. The P50 includes three 120mm fans and has eight total fan mounts, with room for two 2x120mm radiators. 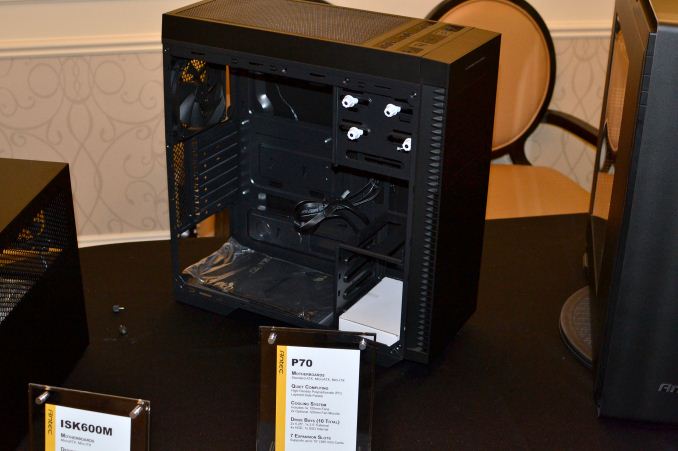 Moving on, P70 has nothing really in common with the P50; where the P50 is like a budget friendly version of the ISK600M, the P70 is a standard ATX tower. It has support for up to ten drives total; there are 2 x 5.25" and 1 x 3.5" external bays and 4 x 3.5" and 1 x 2.5" internal bays; I believe you can put four 2.5" drives in place of the two 5.25" bays. The case is designed to reduce noise with polycarbonate layers on the side panels, and it includes three 120mm fans with two optional 120mm fan mounts available. Liquid cooling and radiators are also supported on the top and back, and the price point of $70 targets the mainstream market. 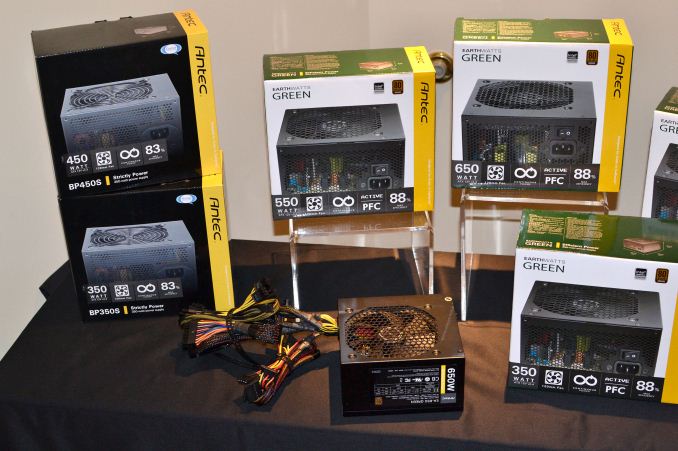 Moving on to power supplies, there wasn't too much to discuss. Their EarthWatts series has done well, as has the BP series (Basic Power), and they've found that they can essentially keep the efficiency and even improve some of the components while dropping the price. To that end, there will be new BPxxxS models coming out at the lower end of the pricing spectrum. At the high end, the Edge line is their top performing PSU with 80 Plus Gold and much higher price points. 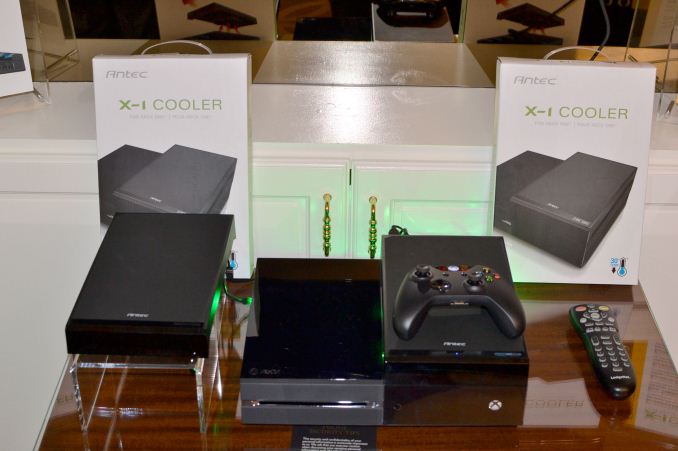 Finally, Antec was showing their Xbox One cooler, conveniently named the X-1 Cooler, with an integrated LED display showing the intake and exhaust temperatures. Note that the green lighting effects in the pictures are not part of the retail product, thankfully, as it's a bit bright. The X-1 is already available at Antec's store, with a price of $29.99, and it reportedly cools the Xbox One by up to 30%. It also senses the temperature of the Xbox One and only turns on the fan when the temperatures are above 30C.