Even though I follow the air cooling market, I perhaps do not follow it in extreme detail, but a couple of years back we saw a new form of cooling being engineered. It involved, for a lack of a better explanation, a rotating heatsink whereby the air was sucked into the middle and expelled through the fins very quickly in all directions. The base plate connected to the CPU was still present, with the base plate and heatsink separated by a thin (several microns) cushion of air. This air cushion was a concern of mine, as typically conduction through a heatsink as well as the convection of air is usually the limiting cooling factor.

Fast forward two years and a company called CoolChip Technologies (or CoolChip or short) has licensed the latest version of this technology from Sandia Corporation (a subsidiary of Lockheed Martin) and are bringing it to market with the aid of Cooler Master. 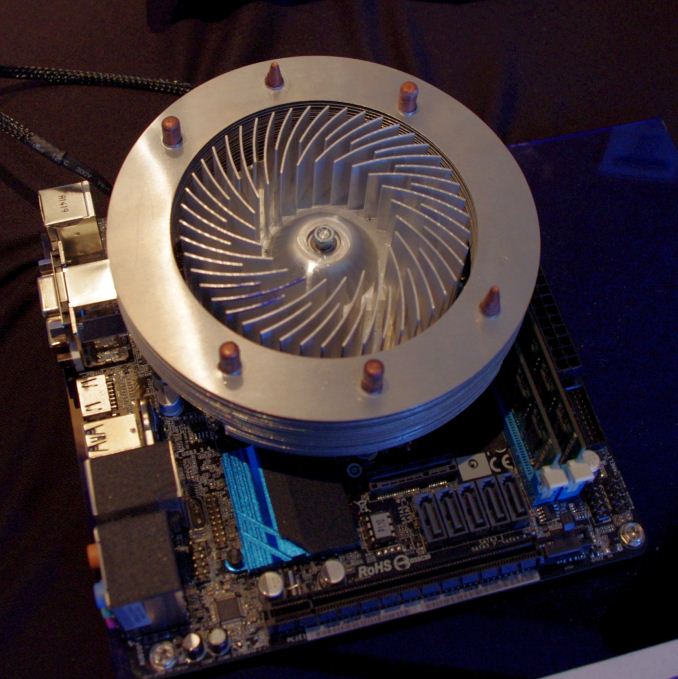 I spent some time with the CEO of CoolChip Technologies, Dr William Sanchez, who was on hand to answer questions. At this stage they are still talking with Cooler Master about prototyping, size, market share and vectors of attack when it comes to creating and marketing their designs. As shown above it is more than just a simple rotating central element, and large static heatsinks can be built around it. One particular question I had was about angle of use, as almost all demonstrations of the technology were parallel to the desk. He confirmed that the technology works both upright and upside down, which is good to hear. 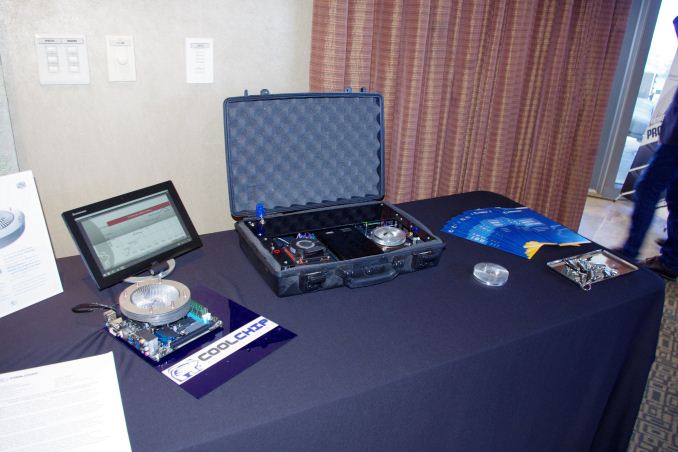 The system here, designed to compare a 1U rotating heatsink against a 1U blower, showed that at the same RPM the new design makes less noise and expels air in all directions, helping cool adjacent components. Dr Sanchez remarked that the heatsink was relatively safe to touch, and in true AnandTech style I managed to almost break it when touching it in motion. I postulated that a small frame, similar to a fan guard, might be an easy way to stop prying fingers like mine which might break it.

There is plenty of potential in this technology. The air cooling market has been stagnant for a number of years for something truly revolutionary, at there is potential here for both Coolchip and CoolerMaster to break the age old barrier. If we can get hold of pre-production samples for testing, we will let you know the results. As of yet, due to the early stage of the design, we do not know when that will be.