While testing SATA Express and writing this article, I constantly had one thought in my head: do we really need SATA Express? Everything it provides can be accomplished with existing hardware and standards. Desktops already have PCIe slots, so we don't need SATAe to bring PCIe SSDs to desktop users. In fact, SATAe could be viewed as a con because it takes at least two PCIe lanes and dedicates them to storage, whereas normal PCIe slots can be used for any PCIe devices. With only 16+8 (CPU/PCH) PCIe lanes available in mainstream platforms, there are no lanes to waste.

For the average user, it wouldn't make much difference if you took two or four lanes away for SATAe, but gamers and enthusiasts can easily use up all the lanes already (higher-end motherboards tend to have additional controllers for SATA, USB 3.0, Thunderbolt, Ethernet, audio etc., which all use PCIe lanes). Sure there are PCIe switches that add lanes (but not bandwidth), and these partially solve the issue but add cost. And if you add too many devices behind a switch there's a high chance that bandwidth will become a bottleneck if all are in use simultaneously.

I'm just not sure if I like the idea of taking two, potentially four or six, PCIe lanes and dedicating them to SATAe. I'd much rather have regular PCIe slots and let the end-user decide what to do with them. Of course, part of the problem is that we're dealing with not having enough lanes to satisfy all use cases, and SATAe could spur Intel and other chipset to provide more native PCIe lanes.

For laptops and other small form factor builds SATAe makes even less sense because that's the purpose of M.2. 2.5" SSDs can't compete with M.2 in space efficiency and that is what counts in the mobile industry. The only purpose of SATAe in mobile that I can see is laptops that use 2.5" SATA drives by default that can then be upgraded to 2.5" PCIe SSDs. That would allow OEMs to use the same core chassis design for multiple SKUs that could then be differentiated with the form of storage and it would also allow better end-user upgradeability. However, I still believe M.2 is the future in mobile especially as we are constantly moving towards smaller and thinner designs where 2.5" is simply too big. The 2.5" scenario would mainly be a niche scenario for laptops that don't have an M.2 or mSATA slot. 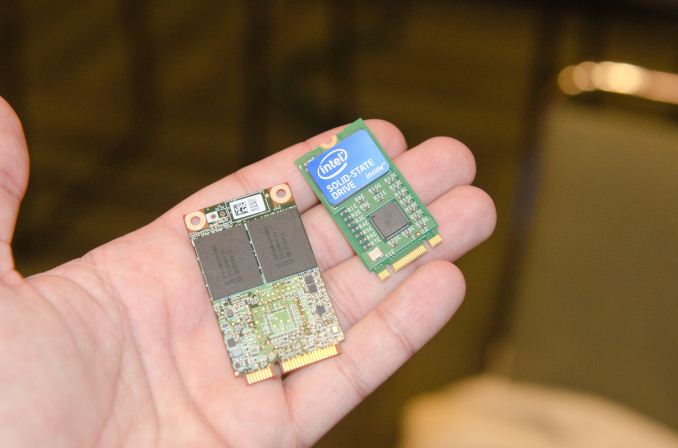 This is how small mSATA and M.2 are

Another issue exists in the OEM space. There are already four dominant form factors: 2.5" SATA, half-height/length PCIe, mSATA, and M.2. With SATA Express we would need an additional one: 2.5" SATAe (PCIe). The half-height/length PCIe is easy because all you need is an adapter for an M.2 PCIe SSD like Plextor has, but 2.5" PCIe is a bit trickier. It would be yet another model for OEMs to build and given the current NAND situation I'm not sure whether the OEMs are very happy about that.

The problem is that the more form factors there are, the harder it is to manage stock efficiently. If you build too many units in a form factor that doesn't sell, you end up having used tons of NAND on something that could have been better used in another form factor with more demand. This is why M.2 and half-height/length PCIe are great for the OEMs—they only need to manufacture M.2 SSDs and the end-product can be altered based on demand by adding a suitable adapter.

Fortunately the inclusion of both SATA and PCIe in SF-3700 (and some others too, e.g. OCZ's upcoming Jetstream Express controller) helps because OEMs only need to build one 2.5" drive that can be turned into either SATA or PCIe based on the demand. However, not all controllers support this, so there are still cases where OEMs face the issue of an additional model--and even for those drives that do support SATA and PCIe, it takes additional die area and R&D resources, resulting in higher costs.

Ultimately I don't believe the addition of a new form factor is a major issue because if there is customer demand, the OEMs will offer supply. It may, however, slow down the adoption of SATAe because the available models will be limited (i.e. you can score a better deal by getting a regular PCIe SSD) as some manufacturers will certainly be slower in adopting new form factors.

All in all, the one big issue with SATAe is the uncertainty due to the lack of product announcements. Nobody has really come forward and outlined plans for SATAe integration, which makes me think it's not something we'll see very soon. Leaks suggest that Intel won't be integrating SATAe into its 9-series chipsets, which will push mainstream availability back by at least a year. While chipset integration is not required to enable SATAe, it lowers the cost for motherboard OEMs since fewer parts and validation are required. Thus I suspect that SATAe will mainly be a high-end only feature for the next year and a half or so and it won't be until Intel integrates it into chipsets that we'll see mainstream adoption.