NVMe vs AHCI: Another Win for PCIe

Improving performance is never just about hardware. Faster hardware can only help to reach the limits of software and ultimately more efficient software is needed to take full advantage of the faster hardware. This applies to SSDs as well. With PCIe the potential bandwidth increases dramatically and to take full advantage of the faster physical interface, we need a software interface that is optimized specifically for SSDs and PCIe.

AHCI (Advanced Host Controller Interface) dates back to 2004 and was designed with hard drives in mind. While that doesn't rule out SSDs, AHCI is more optimized for high latency rotating media than low latency non-volatile storage. As a result AHCI can't take full advantage of SSDs and since the future is in non-volatile storage (like NAND and MRAM), the industry had to develop a software interface that abolishes the limits of AHCI.

The result is NVMe, short for Non-Volatile Memory Express. It was developed by an industry consortium with over 80 members and the development was directed by giants like Intel, Samsung, and LSI. NVMe is built specifically for SSDs and PCIe and as software interfaces usually live for at least a decade before being replaced, NVMe was designed to be capable of meeting the industry needs as we move to future memory technologies (i.e. we'll likely see RRAM and MRAM enter the storage market before 2020).

The biggest advantage of NVMe is its lower latency. This is mostly due to a streamlined storage stack and the fact that NVMe requires no register reads to issue a command. AHCI requires four uncachable register reads per command, which results in ~2.5µs of additional latency. 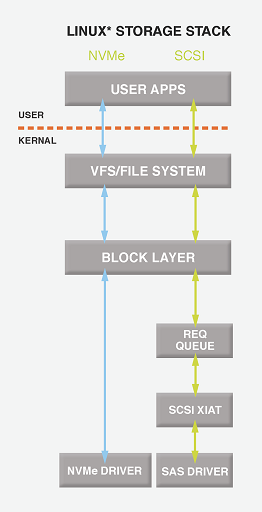 Another important improvement is support for multiple queues and higher queue depths. Multiple queues ensure that the CPU can be used to its full potential and that the IOPS is not bottlenecked by single core limitation. 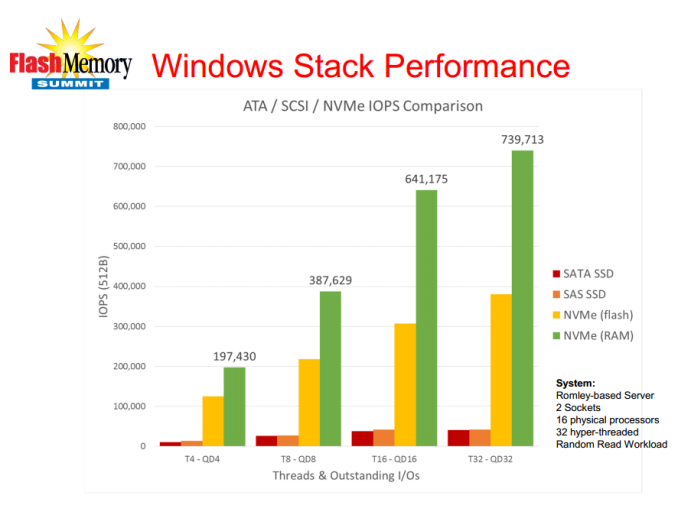 Obviously enterprise is the biggest beneficiary of NVMe because the workloads are so much heavier and SATA/AHCI can't provide the necessary performance. Nevertheless, the client market does benefit from NVMe but just not as much. As I explained in the previous page, even moderate improvements in performance result in increased battery life and that's what NVMe will offer. Thanks to lower latency the disk usage time will decrease, which results in more time spend at idle and thus increased battery life. There can also be corner cases when the better queue support helps with performance.

With future non-volatile memory technologies and NVMe the overall latency can be cut to one fifth of the current ~100µs latency and that's an improvement that will be noticeable in everyday client usage too. Currently I don't think any of the client PCIe SSDs support NVMe (enterprise has been faster at adopting NVMe) but the SF-3700 will once it's released later this year. Driver support for both Windows and Linux exists already, so it's now up to SSD OEMs to release compatible SSDs.