I don’t think many people looking at the Clevo P157SM are going to be super concerned with general application performance; as we’ve said numerous times, most notebooks have long since surpassed the “fast enough” mark for the majority of users. You’re likely to buy a Clevo P157SM for the GPU more than the other elements, so we’ll start with a rundown of gaming performance, focusing on our Mainstream and Enthusiast settings (though you can find the Value results in Mobile Bench, as usual). For our benchmarks, we have four configurations of the Mythlogic Pollux 1613 that we tested: stock i7-4700MQ, stock i7-4900MQ, and overclocked for both processors. The other laptops included in our charts are detailed (and linked) below. I’ll have more to say on overclocking on the next page, but we’ll start with our Mainstream and Enthusiast gaming results; as usual, the full set of results (including Value Gaming performance) is available in Mobile Bench.

Before we get to the benchmarks, a bit of history on the Haswell and GTX 780M notebooks is in order. With the MSI GT70 Dragon, Dustin measured some rather high temperatures and assumed that the CPU and/or GPU might be throttling performance. Our second test notebook from Mythlogic doesn’t have any issues with high temperatures, and it’s faster in some cases, slightly slower in others, but everything is close enough that it looks like throttling of the CPU wasn’t actually an issue on the MSI GT70—the difference is never more than 7%, and in most cases it’s closer to 1-3%. What’s more, while the temperatures are higher than we’d like, I did some additional testing with a GT70 and found that the CPU and GPU clocks are right where they’re supposed to be. So if the CPU isn’t throttling, what’s the problem?

It turns out there are several things going on with our gaming benchmarks as well as our test platforms. Clock for clock, Haswell really isn’t much faster than Ivy Bridge—maybe 5% at best—and really even Sandy Bridge isn’t too far off. The biggest changes between the last three generations of mobile Intel processors have a lot more to do with reducing power use and improving integrated graphics performance, neither of which proves particularly beneficial for high-end gaming notebooks. So when we have i7-2820QM and i7-3820QM going up against i7-4700MQ (basically the Haswell iteration of the earlier 3610QM and 2630QM), we’re actually dealing with a slower CPU despite the newer architecture. At lower detail settings most games become more CPU limited, but even at maximum detail it turns out we have a couple of games that are still predominantly CPU limited—Elder Scrolls: Skyrim and StarCraft II: Heart of the Swarm are the big ones, but a few of the other titles also hit CPU bottlenecks.

One final note: Mythlogic (Clevo?) by default includes Virtu's MVP 2.0 software. In theory this helps smooth out gaming frame rates; in practice, sometimes it helps and sometimes you get rendering errors or reduced frame rates. Thankfully, you can disable Virtu at any time, and I did so for all of my testing of the Pollux 1613. In fact, if this were my own laptop, I'd be inclined to simply uninstall Virtu MVP completely and be done with it, as it has to be disabled on each reboot. 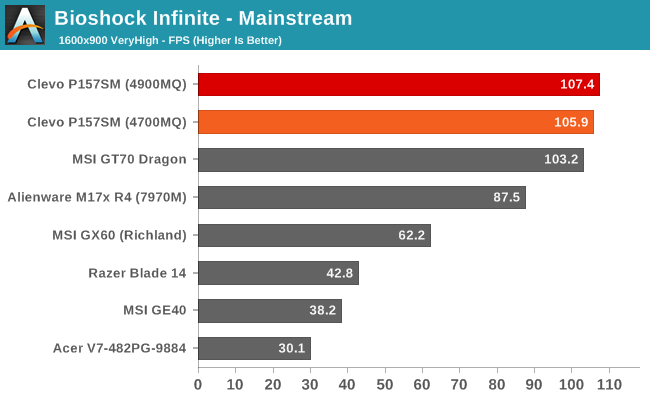 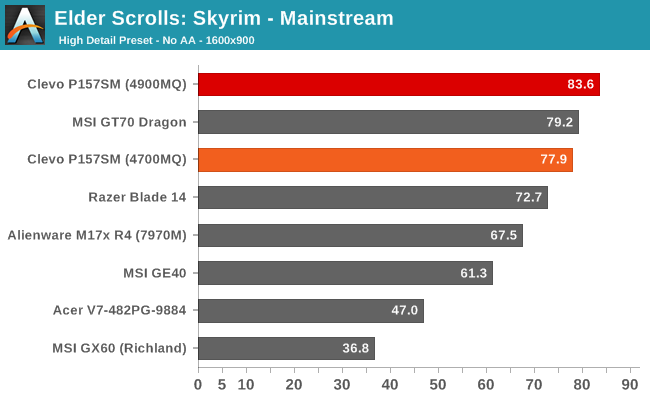 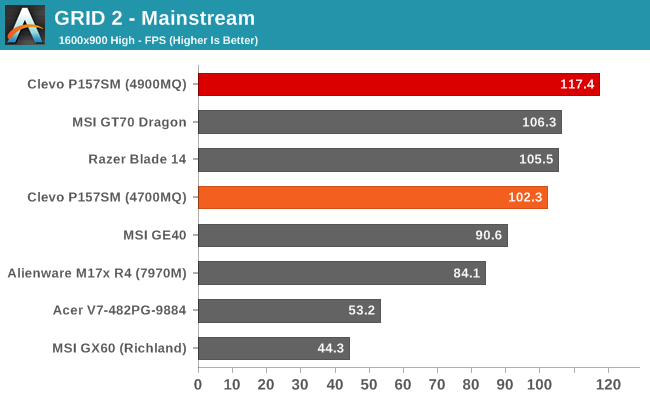 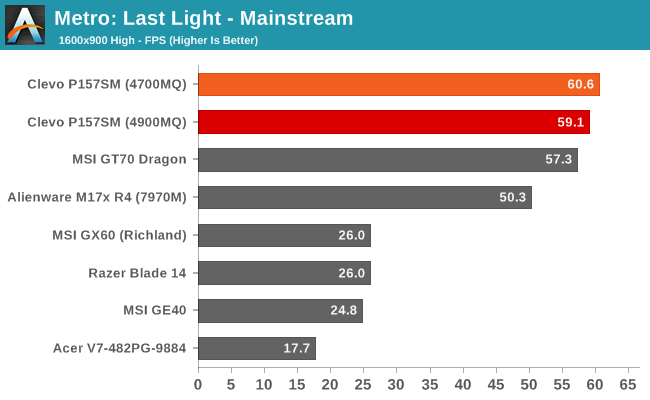 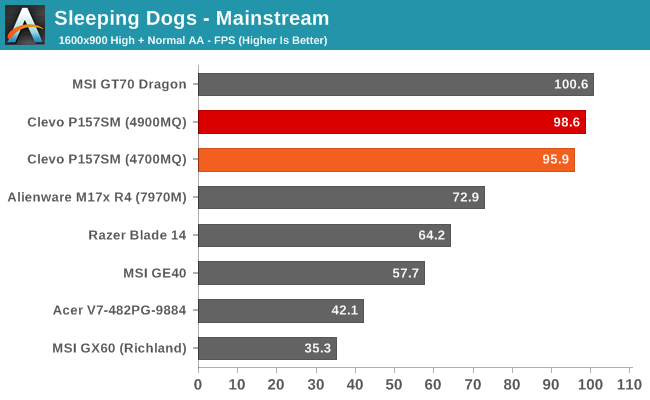 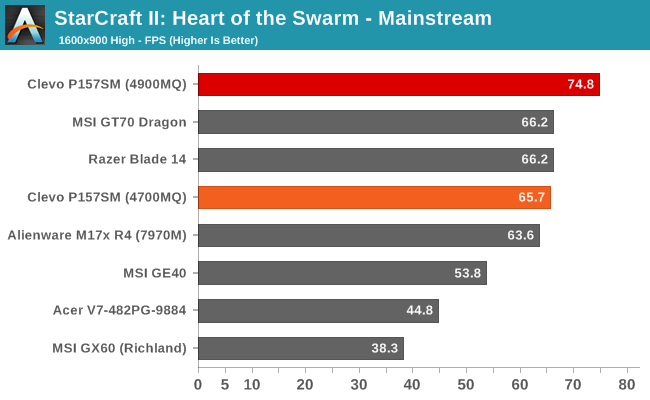 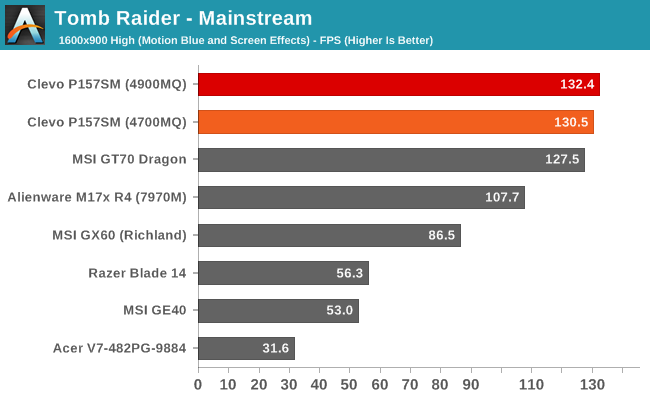 There aren’t too many surprises here; the Clevo P157SM is one of the fastest gaming notebooks we’ve ever tested, basically trading blows with the MSI GT70. In many cases the P157SM comes out ahead, but it’s not always faster; in fact, averaging the frame rates over the seven tested games (Company of Heroes 2 results weren’t available for the MSI), the MSI actually comes out just ahead of the P157SM – though a difference of 0.2% is hardly worth mentioning. More noteworthy is that even at our Mainstream settings, the CPU upgrade to the i7-4900MQ improves performance by over 5% on average. In many of the games, the two CPUs are basically equal as the GPU ends up being the bottleneck, but Elder Scrolls: Skyrim, GRID 2, and StarCraft II all show significant gains. We’re basically looking at an 11-17% clock speed increase by moving up to the 4900MQ, plus the extra 2MB L3 cache also helps. Skyrim improves by 7%, GRID 2 by 15%, and StarCraft II by 14%. If you’re playing any CPU intensive games, you may find the faster CPU to be a worthwhile upgrade. 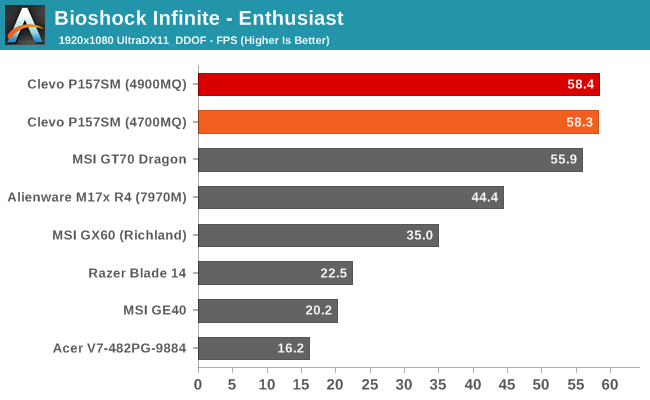 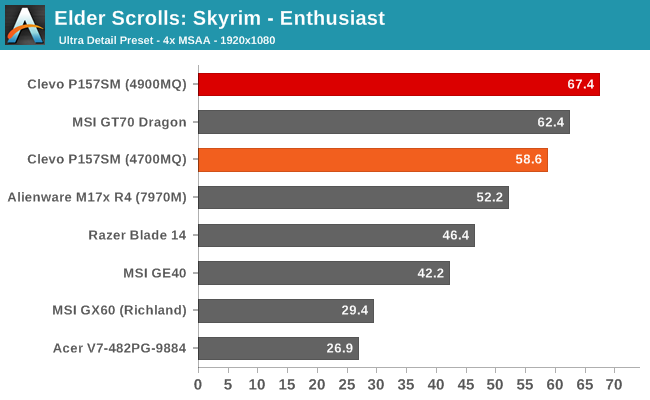 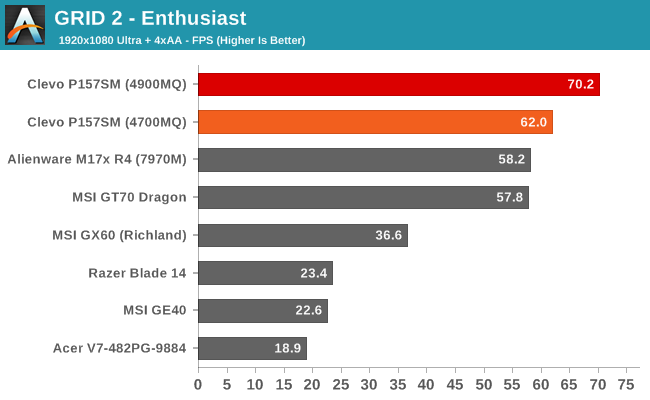 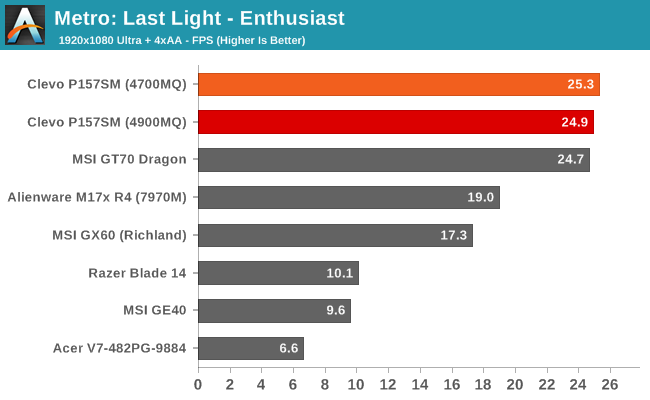 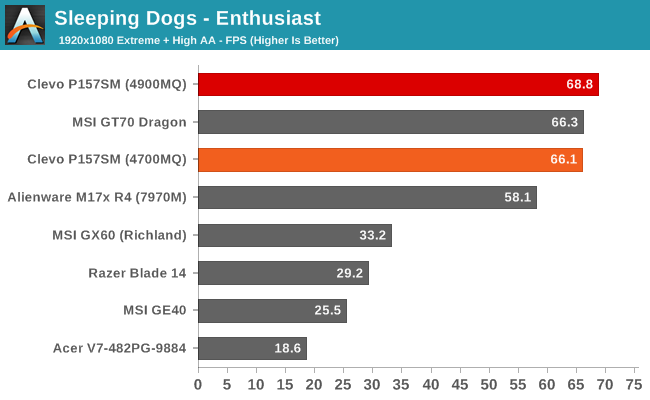 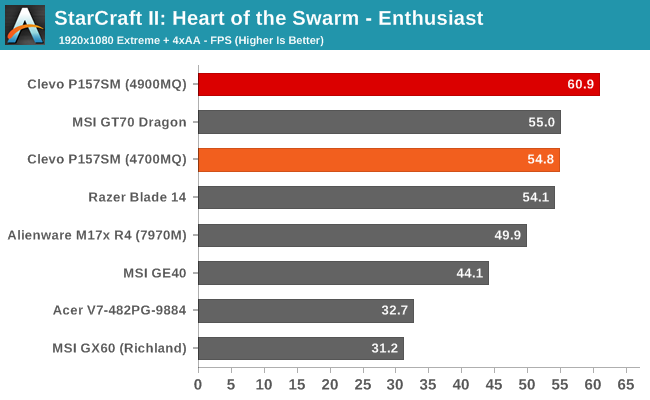 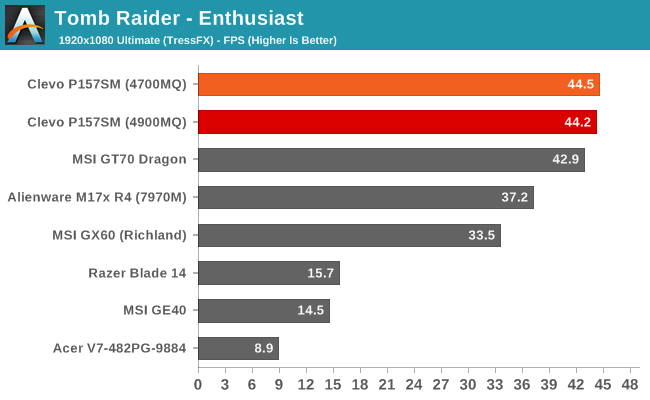 Performance with the GTX 780M notebooks flattens out at our Enthusiast settings, though again we see a sizeable jump in performance with Skyrim, GRID 2, and StarCraft II. The Clevo P157SM is now slightly faster on average compared to the MSI GT70 (1.2%), while the 4900MQ still improves the overall average frame rates by an impressive 7%. There’s more at play here than pure frame rates, however, so let’s discuss overclocking of the CPUs next.