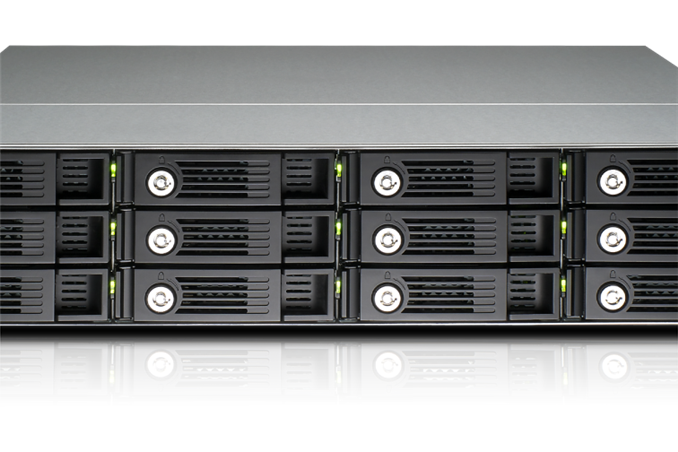 QNAP's flagship NAS lineup, the TS-ECx79U-RP, checks all the boxes for a high performance enterprise NAS in a rackmount form factor for high end SMBs. These include quad GbE ports (with a free PCIe slot to add a 10 GbE interface), a Xeon processor to handle the software RAID, volume encryption acceleration with AES-NI, dual redundant power supplies and so on. QNAP realized that there was a market demand for a cheaper version with the same form factor and a few similar features, but without the extreme performance provided by the Xeon-based platform. Towards this, QNAP recently introduced the TS-1269U-RP rackmount NAS for the SMB market.

The TS-1269U-RP provides 12 hot-swappable HDD bays in a 2U form factor and retains the dual redundant hot-swappable power supply feature from the flagship lineup. It is based on a dual-core Intel Atom D2700 series processor running at 2.13 GHz. The unit has 2 GB of DRAM which can be expanded by the user to 3 GB. Both 2.5" and 3.5" drives are supported and the unit comes with two GbE ports. Unlike the TS-ECx79U-RP flagship series, there are no PCIe slots available for expanding the network interface list. There are two USB 3.0, two eSATA and four USB 2.0 ports along with an HDMI output port. QNAP claims power consumption between 65 and 85W depending on the load on the NAS. With port trunking, QNAP was able to obtain up to 222 MB/sec read and 223 MB/sec write performance, well in line with what is obtained using other Atom-based NAS units with two trunked network links.

In terms of OS and software features, QNAP's embedded Linux firmware provides for secure cross platform file sharing, an iSCSI / IP-SAN storage combo and a number of other business applications.
It also integrates a number of backup applications. Virtualization support is also available, with the unit being Windows Server 2012 certified and also coming with VMware Ready and Citrix Ready certifications.
Surveillance Station Pro can also bring together various IP cameras for a video surveillance system. QNAP also provides the Qfile, Qmanager and Qmobile iOS / Android apps for accessing and monitoring the NAS on the go.