Although Haswell will likely be a great fit for the next-gen MacBook Pro, anyone who travels a lot and does a good amount of work with their machine will be seriously tempted to upgrade now.

I've touched on the SSD speed bump already, and I've talked about how Apple is handling DPI scaling in Lion. To recap, Retina Display MBP owners now get a slider under OS X's Display Preferences that allow you to specify desktop resolutions other than 1440 x 900. At 1440 x 900 you don't get any increase in usable desktop resolution compared to a standard 15-inch MacBook Pro, but everything is ridiculously crisp. If you're like me however and opted for the 1680 x 1050 "high-res" upgrade last generation, this won't do. Thankfully Apple offers 1680 x 1050 and 1920 x 1200 scaling options that trade a bit of image quality and performance for added real estate. The gallery below gives you a look at the five settings.

Even at the non-integer scaled 1680 x 1050 setting, the Retina Display looks a lot better than last year's high-res panel. It looks like Apple actually renders the screen at twice the selected resolution before scaling it to fit the 2880 x 1800 panel (in other words, at 1920 x 1200 Apple is rendering everything at 3840 x 2400 (!) before scaling - this is likely where the perf impact is seen, but I'm trying to find a way to quantify that now). Everything just looks better. I also appreciate how quick it is to switch between resolutions on OS X. When I'm doing a lot of work I prefer the 1920 x 1200 setting, but if I'm in content consumption mode I find myself happier at 1440 x 900 or 1680 x 1050.

In the standard (glossy) MacBook Pro, Apple had a standard LCD arrangement with two sheets of glass plus a third piece of cover glass that gave it the seamless edge-to-edge glass appearance. The MacBook Air and the high-res/matte display on the other hand did not have any cover glass and instead hid the LCD panel behind a bezel. The MacBook Pro with Retina Display uses a similar LCD construction to the MacBook Air/matte-MBP, without a cover glass. Instead the Retina Display's two glass layers are different sizes, which you can sort of see in the cross section below: 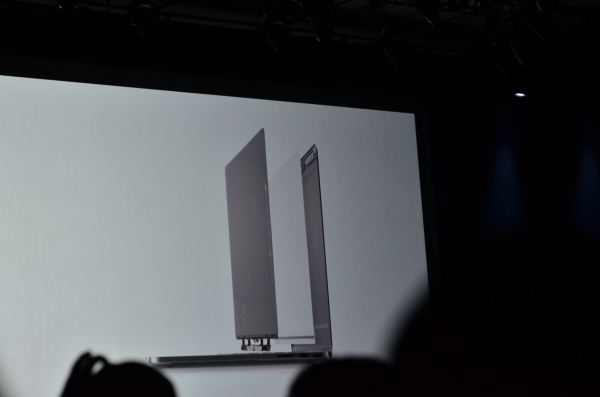 By removing the cover glass Apple reduces the number of reflections and thus glare, however it's important to point out that this still isn't a matte display. I've never been particularly bothered by glossy screens so I'm really the wrong person to ask whether or not the reduction in reflections makes it usable. Compared to my matte MacBook Pro, the Retina Display is obviously more glossy but at the same time remarkably close. I'll reserve my final judgement until I've used the display in more varied conditions however.

As always, Apple chose to deal with the issues of glare and reflections by integrating an extremely bright panel with great black levels. The MacBook Pro's Retina Display is the first IPS based panel Apple has ever used in a MacBook. Viewing angles are much improved, as are black levels: 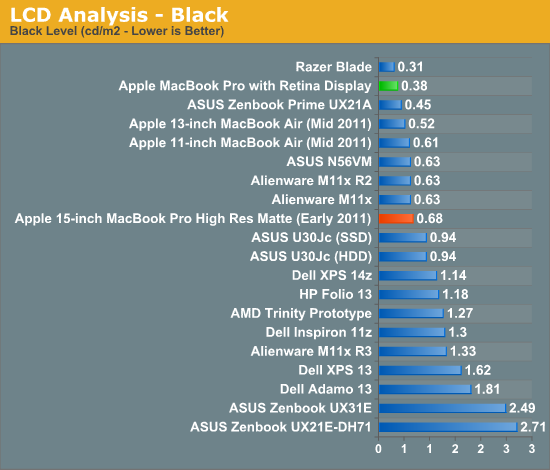 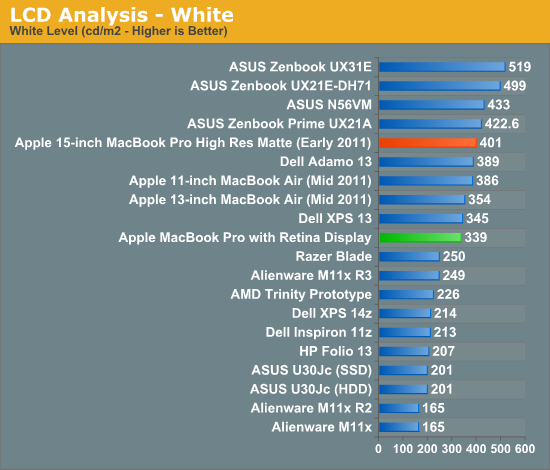 Brightness appears to be down a bit compared to last year's high-res model, but the improvement in black levels more than makes up for the loss. Contrast ratio takes a huge step forward: 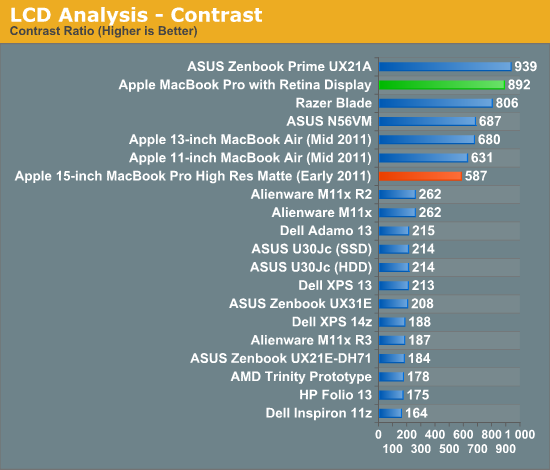 When I'm back in the office I'll take some good shots of the wide viewing angles afforded by the new IPS Retina Display. The old MacBook Pro had a really good display but this just takes it to the next level. The improvement in contrast ratio is the most tangible for me however, aside from the increase in resolution of course.

A tremendous benefit of being a provider of both software and hardware for the Mac platform is Apple can obviously sync the introduction of new features in both. Mail, Safari, iPhoto, iMovie and of course, OS X have all been updated to support the new MacBook Pro Retina Display. These applications all look absolutely gorgeous on the new Pro.

Third party applications will have to be updated however. What happens if you run an app that hasn't been updated to support the Retina Display? This screenshot comparing Google Chrome (left) to Safari (right) provides the best (worst case?) example:

Here Google uses Apple's text rendering API however Chrome renders to an offscreen canvas. Chrome's offscreen render doesn't appear to be Retina Display aware, and thus you get the mess you see above. It's usable, but it's a significant enough difference for me to drop Chrome and use Safari until it gets worked out. And I really like Chrome. Update: Chrome Canary appears to fix this.

Most developers will simply need to ensure they supply @2x image assets similar to the situation under iOS in order to properly support the Retina Display.

You'll notice that OS X doesn't, by default, expose the Retina Display's native 2880 x 1800 resolution anywhere in the standard, user-facing elements of the OS. In fact, 1920 x 1200 is the highest screen "resolution" you can select - a way of appeasing displaced 17-inch MacBook Pro owners. What about 3D games however?

The good news is the Retina MBP does nothing to hide its true nature from games. The screenshot above Diablo III was taken at 2880 x 1800. The setting page below shows the full list of resolutions enumerated:

Diablo III is actually quite playable at 2880 x 1800, at least in the earlier levels (I haven't had time to make it far enough in the game to tell how bad it can get). I managed to average 20 fps at 2880 x 1800 in the most stressful scene I have presently unlocked. Obviously things are smoother at lower resolutions. Diablo III exhibited some graphical anomalies at 1920 x 1200, but was fine at other 16:10 resolutions.

Not all games will let you do this however. The Unigine Heaven benchmark for example wouldn't expose any resolutions higher than 1920 x 1200. Portal 2, on the other hand, did:

The console text in Portal 2 illustrates why even games need to be updated for proper Retina Display support:

This is also a great example of why Apple didn't directly expose a 2880 x 1800 display resolution in OS X.

I was pleased when ASUS introduced a 1080p IPS panel in the new Zenbook Prime. I am even happier with the Retina Display in the next-generation MacBook Pro. I still need to clock in more hours on the new panel but it's been amazing thus far. I like it even better than the display on the new iPad, likely because I can appreciate it more in my line of work (I'm not typing 15K word articles on the iPad).

Although I'm still saving a bit for the full review, here are some other thoughts I had during my time with the next-gen MacBook Pro:

- The SD card reader works a lot better than its predecessor. In my early 2011 15-inch MacBook Pro there are a number of cards that won't read properly without repeated insertion and/or without applying pressure to the card once it's in the system. The next-gen Pro appears to have fixed this problem for me, at least based on the two cards I'm traveling with now. I have a particularly problematic card back home that I will try as soon as I can.

- Key travel appears to have been reduced a bit, either that or the keys are less springy than on my Sandy Bridge MBP. It's not bad, just different.

- The next-gen Pro chassis is definitely easier to carry around than the old unibody, but it doesn't exactly feel small. I lug around my 15-inch Pro enough that I'd appreciate the difference but don't expect this to feel like a slightly larger MacBook Air. Looking at it another way, the next-gen Pro feels right and makes the old unibody design feel big.

- I really wish the $2199 SKU had the 512GB SSD, or at least offered it as an option - otherwise the spec is near perfect in my mind. Without a standard 2.5" SSD it's going to be difficult to just swap in a larger drive. Other companies may make replacement drives down the road, but if Apple is using Samsung's PM830 controller in here I don't know that I'd want something else. 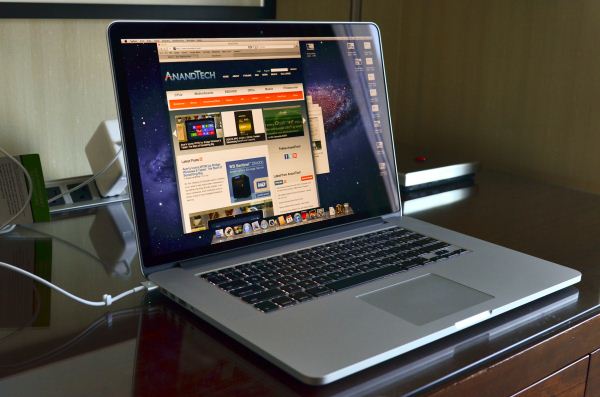 That's all for now. I've got a lot more testing ahead of me. My flights tomorrow (technically, today) should prove for some good use case testing in an evironment I'm all too familiar with.