Reviews of Intel manufactured boards are something of a rarity.  They are not marketed in the same way other motherboards are – almost not at all in comparison.  It could be argued that reviews are only seen coming at the start of a chipset release, coinciding with what we as reviewers get in our media kits from Intel itself.  However, to an enthusiast, it is strange to say that they sell well – consumers or system builders wanting to pair a processor with a board without hassle can go straight in at an Intel motherboard/processor combo.  The question is with an enthusiast platform such as X79, would you really want to deal with an Intel board?

Internally, I have to question how big Intel’s consumer motherboard design team is.  We know their processor and chipset design groups must be comparatively huge to pump out all the products we see on our shelves.  But to produce only one or two consumer motherboards with each chipset, it comes into question whether an Intel board would contain all the features, updates (cf. BIOS later), performance and competitiveness when compared to products from third party vendors, for which motherboards are their main business.  Our last reviews of P55 and H57 show that Intel usually plays it safe – having a working product on their end is more important than bells and whistles.  However in a market where a ‘working product’ should be the de facto standard, Intel invariably has tough competition.

The DX79SI ‘Siler’ motherboard from Intel is a hard one to summarize.  If I were being lazy, I could merely say ‘it works’, however there is more to that than meets the eye.  In some areas, it gives more than standard – e.g. dual gigabit Ethernet.  But with one hand it gives and the other it takes away, with no option for teaming.

Users of Intel boards of past will notice the continuing ‘skull’ theme in a blue/black miasma of components and connectors, which unlike previous iterations do not light up.  The board sports the bare minimum from the SATA connectors, as well as a lack of thought to the PCIe layout for anyone using more than one GPU.  The PCIe are only rated for Gen 2, which isn’t surprising – other vendors sporting Gen 3 compatibility are outside X79 specifications for now.

The BIOS itself is simple and functional; however do not expect anything spectacular.  While ASUS, Gigabyte, MSI and the rest have teams of designers for graphical interfaces, Intel does get left behind in its application of a basic system.  It is not always clear what is a menu and what is not, however one thing I do like is that the text turns yellow when you change it, making it easy to see what default is.  This makes looking at the Auto OC options a lot easier.  The ‘Back2BIOS’ switch on the IO panel is a feature I hope other vendors adopt as well.

Performance is nothing to shout about, and the Intel software is, while visually quite easy to navigate, ultimately limiting.  There are no ‘easy’ menus, requiring the user to know the ins and outs of a motherboard in order to use it.  No OS fan controls either – those are strictly in the BIOS.  If the media sample I received for this review is indicative of a retail package, while the mouse mat addition is slightly amusing, there are no SATA cables, but an SLI connector and a Bluetooth/wifi module included.

The Intel DX79SI ‘Siler’ motherboard is expected to retail for approximately $290-$300 and comes with a 3-year limited warranty. 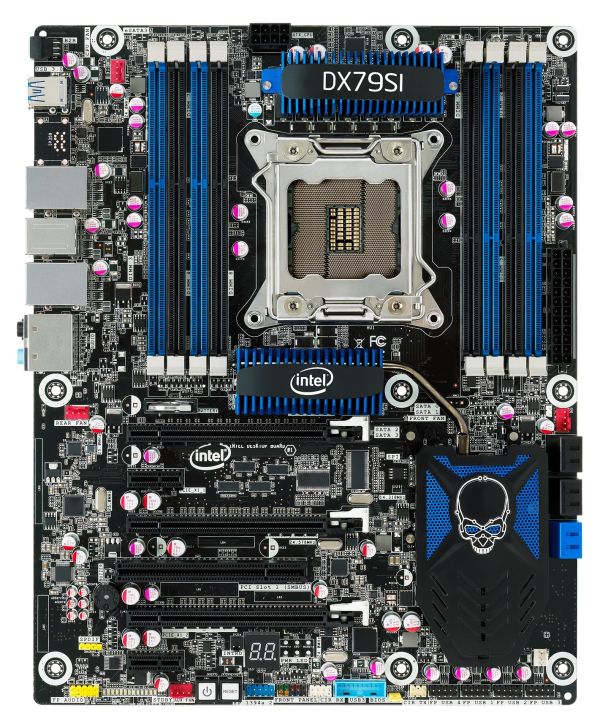 If we ignore the skull heatsink for a second, the Intel board actually looks fairly busy on the PCB, with almost every nook and cranny filled with a trace to some component or another.  As with all X79 products, the area consumed by the socket and memory (in this case, 8 DIMMS, 2 per channel) is just under half the board in itself.  The power delivery heatsink at the top is by itself and very simple, possibly leading to overclocking issues or throttling later on.

The main CPU fan header is at a slightly odd place, to the left of the DIMMs.  This requires the fan cable to go over the memory (hopefully your fan cable will be long enough), which could be an issue if a user decides to actively cool their memory.  The red fan headers on board actually almost follow four points of a compass, with a rear fan header by the IO, a front header by the SATA ports, and an auxiliary fan header next to the power/reset switches. 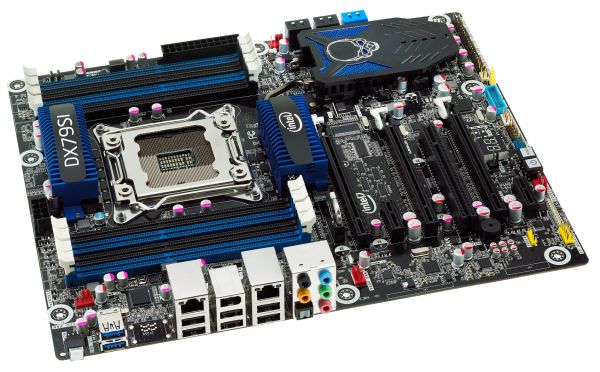 The PCH is covered by that low profile passive ‘skull’ design, which actually hides a relatively small heatsink underneath, hence the connection via heatpipe to a proper air cooled fin arrangement in the middle of the board.  To the right of this skull design are the SATA ports, all from the PCH, so two SATA 6 Gbps (blue) and four SATA 3 Gbps (black).  Users will note that there are no extra SATA controllers on board, so there are no extra SATA ports or eSATA.

Next to the power/reset buttons is a series of LEDs, indicating what part of the POST process is working.  This works in conjunction with the 2-digit debug LED also on board.  I have much use for this in case errors arrive, however there are no options in the BIOS to turn these lights off.  Depending on the case used (varying from bland to windowed) to house the system, these lights could provide an unwelcome aesthetic effect.

One of my main criticisms with the motherboard is the PCIe layout.  In order, we have a PCIe x16, x1, x16, PCI, x16 (limited to x8), x1.  The issue lies in double-width dual GPU setups, whereby the GPUs have to be placed into the x16 slots by order.  This leaves no gap between the GPUs for happy airflow – during my dual GTX580 tests on an open bench test bed, I was surprised and worried about the heat generation, which would only freak me out if it were in a case.  A lot of motherboard manufacturers in X79 should be placing the first and second PCIe slots at least an extra PCIe width apart, allowing for sufficient airflow, however Intel have gone for the ‘it works’ route here.

At various levels, the IO panel is a little disappointing.  It’s very basic, showcasing two USB 3.0, six USB 2.0, dual gigabit Ethernet (Intel NICs of course), Firewire, optical S/PDIF output and audio jacks.  The plus point here is the Back2BIOS button on the left, which when in ‘on’ mode, glows red and always boots into the BIOS.  Another click and the system will boot normally.  This would be handy for certain boards that connect the USB late in the POST sequence, making it a hassle to use the keyboard to enter the BIOS.  There is a big gap in the I/O, suggesting that Intel has skimped on perhaps some more USB 3.0 or eSATA to plug the gap.