Although consumer SSDs are far from a mature technology, PCIe SSDs are even further behind on the growth curve. The upside is huge. As SandForce has already demonstrated with the right dataset a single SSD can nearly saturate the 6Gbps SATA bus. Rather than force OEMs into putting yet another very high bandwidth bus on the motherboard, SSD vendors everywhere (Intel included) turn their attention to PCIe as a solution to the problem.

The holy grail is a native PCIe solution. Recently Micron announced such a thing: the P320h. However the estimated price tag on the P320h could be in the $5000 - $10000 range depending on capacity.

Manufacturers in the consumer SSD space are attracted to PCIe solutions simply because margins are higher. For the most part, client storage is a commodity and if you don't make the NAND and controller going into an SSD you're not making a ton of money selling drives to end users. Sell to an enterprise customer and all of the sudden a couple thousand dollars per drive seems like a bargain. 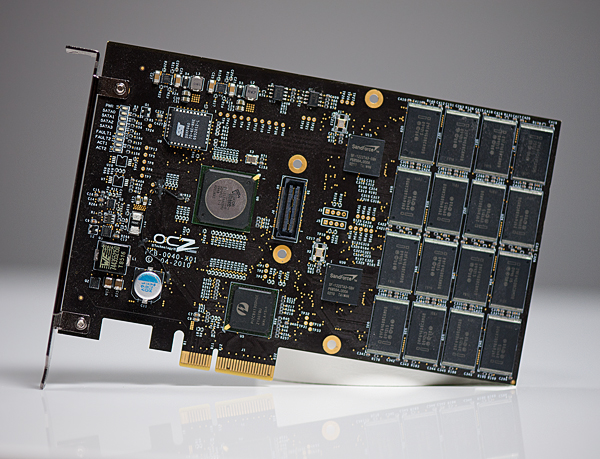 OCZ started making PCIe SSDs the simplest way possible. Take a couple of SSDs, put them on a single PCB behind an on-board RAID controller and you're good to go. The single card performance was decent but of course there were issues. A single controller failure would take out the whole drive and things like TRIM weren't supported either. 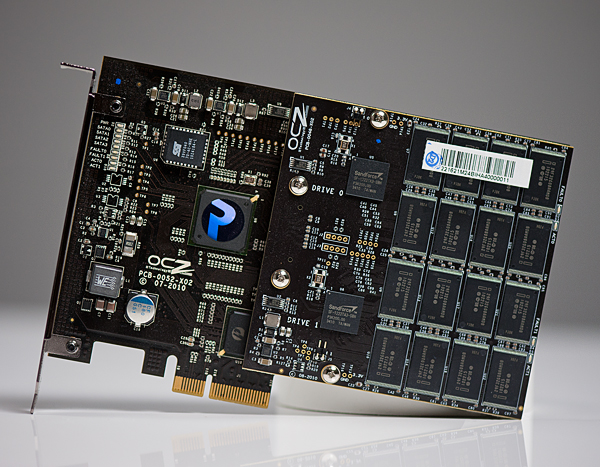 Recently OCZ has been trying very hard to be more than just a rebrander of components. The acquisition of Indilinx puts a wedge between OCZ and a lot of its former peers in the memory business, but it's still a far cry from Intel or Samsung. Its latest PCIe SSD is another step in the maturing of the company. This is the RevoDrive 3 X2: 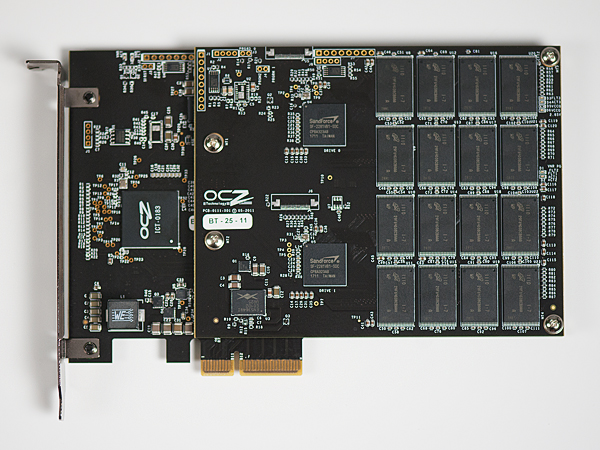 Like previous RevoDrives, the third edition places two SSD controllers (and their associated NAND) on a single PCB. The X2 suffix denotes the two PCBs in use on this particular design. Unlike previous RevoDrives however, the RevoDrive 3 doesn't use a kludgy SATA-to-PCI-X-to-PCIe chain. Instead this drive has a single chip that acts as a 4-port 6Gbps SAS to PCIe x4 (gen2) bridge. 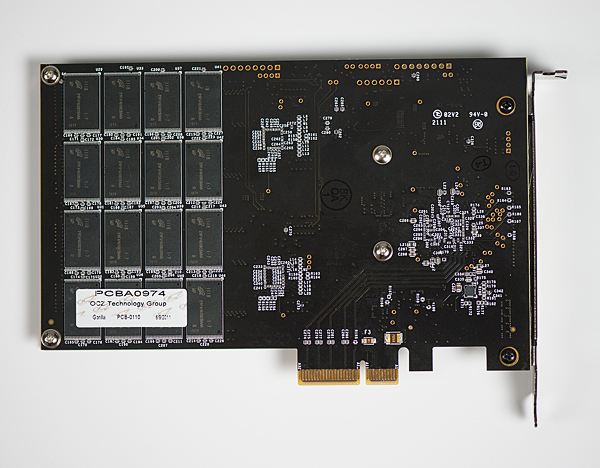 Right off the bat that gives the RevoDrive 3 a full 2GB/s of bandwidth to your system, assuming you've got a x4 (or wider) port available. The RevoDrive 3, like many PCIe devices, will work in x8 and x16 slots as well.

As you'd expect, the RevoDrive 3 uses SandForce's latest SF-2281 controllers. The drive will be available in dual and quad SF-2281 configurations, with capacities ranging from 120GB all the way up to 960GB. Prices and configurations are below:

Even a look at the RevoDrive 3's driver INF file reveals no indication of the chip's OEM (Update: As a number of you have pointed out, the vendor ID seems to indicate that OCZ is using a Marvell SAS controller as the base for the RevoDrive 3):

OCZ wanted to address key limitations of previous RevoDrives: the ability to TRIM and receive SMART data from the drive. The former helps keep performance high while the later is important for users concerned about the health of their drive. Customizing the RevoDrive's controller was the only way to ensure these commands were properly passed. OCZ calls this its Virtualized Controller Architecture 2.0.

The RevoDrive 3's controller is a standard SAS RAID device, however unlike typical RAID-0 arrays data isn't striped across all controllers on the card. Instead OCZ claims its driver accumulates IO queues and dispatches individual IO requests to available SSD controllers. In theory, OCZ's approach wouldn't require matching stripe size to workload - all you need is tons of parallel IO and the software/firmware should take care of the rest. OCZ tells me it has special allowances for corner cases to make sure that one controller isn't writing proportionally more data to its NAND than the others in the system. 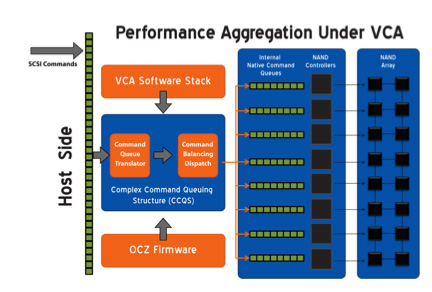 The RevoDrive 3 currently has WHQL driver support for 32-bit Windows 7 and non-WHQL support for 64-bit Windows 7. OCZ is working on WHQL certification for its 64-bit driver but that wasn't available to us at the time of this review.

Unfortunately without WHQL certification on the 64-bit driver that means Windows 7 x64 won't boot off of the RevoDrive 3. The 32-bit version will and OCZ expects both versions of Windows to be bootable by the end of July when the drive is available. This is an important feature as OCZ is touting the drive's ability to function as a boot device as a key feature. 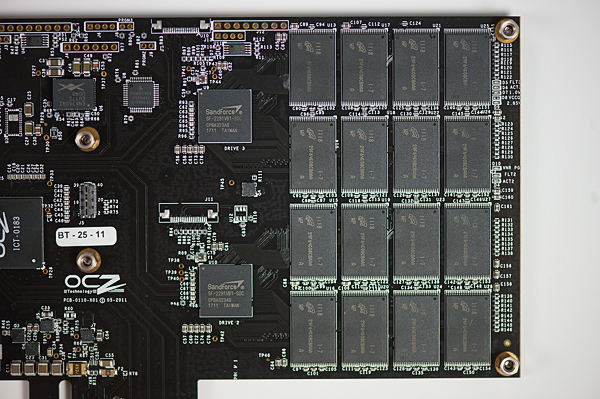 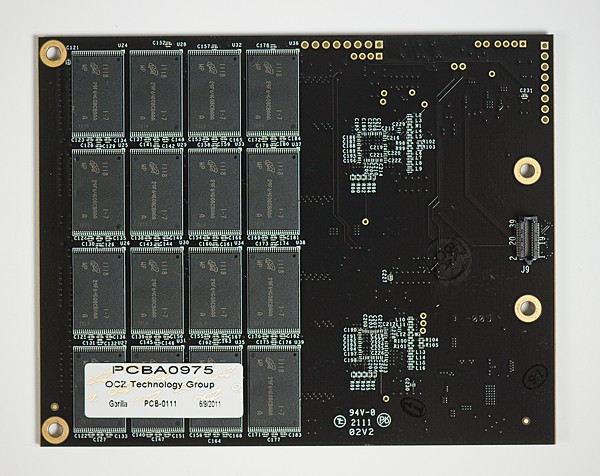 The other major problem with the RevoDrive 3, and unfortunately one that won't be solved in the near future is that although the drive supports TRIM - Windows 7 won't pass the command to the drive. Apparently this is a current limitation that impacts all SCSI/SAS controllers and it's something that only Microsoft can fix. I asked OCZ what the likelihood was that Microsoft would fix this in the near term. OCZ believes that for the next version of Windows Server it's a problem that will have to be addressed, however I didn't get a clear answer on if we can expect anything between now and then. 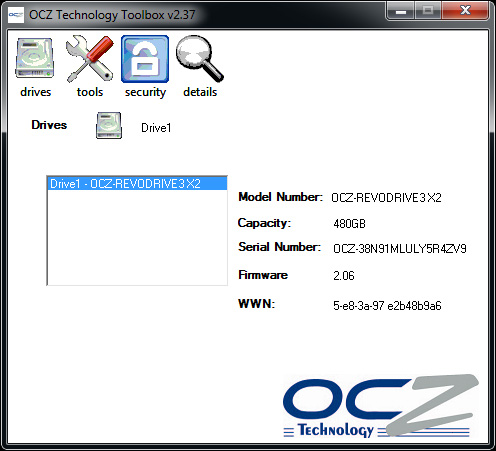 Unlike the RevoDrive 2 however, you can secure erase the RevoDrive 3 using OCZ's SandForce Toolbox. Unfortunately any hopes for real time TRIM support are thrown out the window until Microsoft decides to update Windows.

OCZ did mention that the upcoming z-Drive would have Linux support with fully functional TRIM. Under Windows however if you send a TRIM command to a SCSI/SAS controller the command just gets thrown away before it ever hits the driver.