Hybrid Clouds: are we there yet?

Cloud computing for startups: no infrastructure people necessary
The simplest way of cloud computing: renting virtual machines to avoid hiring infrastructure people. It is very tempting for "developers startups" that simply want to develop and let a software service. Buying hardware and getting support of a third party integrator is a costly and time consuming endeavour: you do not know how succesful your application will be so you might over or undersize the hardware.  If you have no infrastructure knowledge in house and you have to call in the help of a third party integrators for every little problem or upgrade, consulting costs will explode quickly. After a few years,  your integrator is the only one with intimate knowledge of your server, networking and OS configuration. So even if the integrator is too expensive or gives you a lousy service, you can not switch quickly to another one.

Developers just want an OS to run their software on, and that is what the public clouds deliver. In Amazon EC2 you simply chose an instance. An instance is a combination of virtual hardware and an OS template. So in a few minutes you have a fully installed windows or linux VM in front of you and you can start uploading your software. Getting your application available on the internet could not be simpler. The number of instances on EC2 grows with an incredible pace, so they must be doing something right. According to Rightscale, 10.000 instances were launched per day at the end of 2007. At the end of 2009, this number was multiplied by 5!

In theory, using a public cloud should be very cheap. Despite the fact that the public cloud letter has to make a healthy profit, the cloud vendor can leverage the economies of scale. Examples are bulk buying servers and being able to invest in expensive technologies (cooling, high efficient UPS) that only make sense in large deployments.

The reality is however that renting instances at Amazon EC2 is far from cheap. A quick calculation showed us that for example reserving 10 (5 large  + 5 small) Amazon EC2 Windows based instances cost about $19000 per year (Tip: Linux instances cost a lot less!). The one time fee ($8750) alone costs more than a fast dual socket server and the yearly electricity bill. As you can easily run 10 VMs on one server, it is clear that adopting an Amazon based infrastructure is far from a nobrainer if you have the expertise in house. 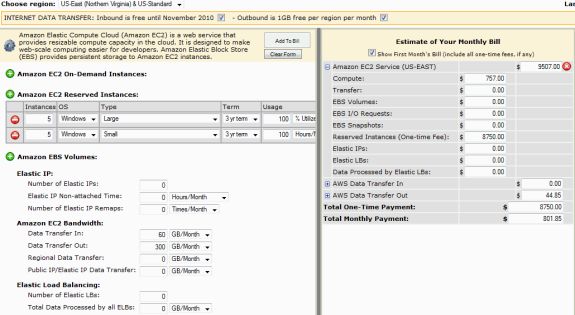 The cost savings must come from the reducing the number of  infrastructure professionals or third party consultants that you hire.