Analyzing the system specifications reveals one clear advantage for ASRock. It is not going to be possible for the average HTPC enthusiast to build a similar system himself with off-the-shelf components. The reason lies in the fact that the Arrandale processor used in the system is currently available for OEM purchase only. All the processors available for general purpose (the Clarkdales) do not fit in the same power envelop as the Arrandales. We covered the Arrandale platform in detail earlier, and concluded that it had a very good power consumption / performance balance. In this section, we will analyze each of the system components in detail.

Over the last 6 months, we have seen many motherboards featuring the H55 chipset. In the mini-ITX form factor, we have covered Zotac's offering as well as Gigabyte's. However, both of them are meant for the desktop Clarkdale processors. What we see in the Core 100 HT-BD is more similar to the motherboards one sees in notebooks. Feature wise, the ASRock motherboard can be compared with the Gigabyte version, since both have support for USB 3.0 ports. However, being a mobile platform, there are some important differences. Tagging on USB 3.0 ports to the HM55 chipset is fraught with issues (more on this in the Performance section). Also, there is no PCI-E x16 slot in the motherboard because the chipset doesn't support it. DVI and PS2 ports are also absent. However, compared to the Gigabyte board, we have two extra USB 2.0 ports. The odd thing to observe here is that ASRock has decided to go with a VGA port instead of DVI, and providing us with a HDMI to DVI adapter, instead of providing a DVI port with a DVI to VGA adapter for folks with older equipment. 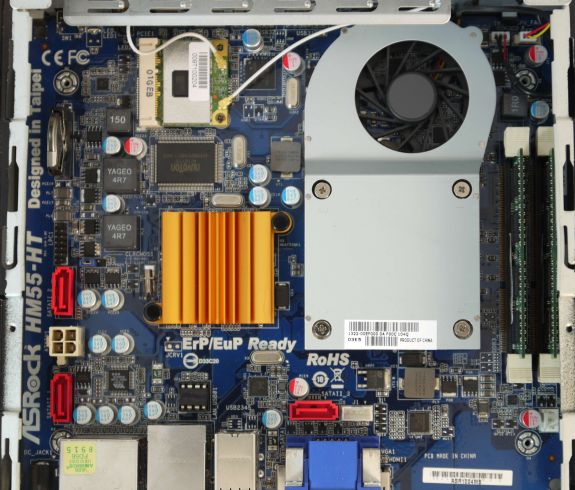 Rounding up the other components of the motherboard, we have the Realtek RTL8111E for GbE, and the VIA VT2020 for audio. The mini PCI-E expansion slot is occupied by the Atheros AR9287 module capable of 300 Mbps. As can be seen from the photograph, we have wires connected to the side panels, which act as antennae for the wireless signals. Like many other offerings in the market, ASRock also uses NEC's USB3 controller, giving the system two USB 3.0 ports. Another interesting chip on the board is the Nuvoton NCT6775F. It handles all the sensors (fan speed, temperature etc.) and also the IR support for the MCE remote.

The H55M chipset supports upto 4 SATA ports. In the Core 100 HT-BD, two of them are used by the Blu Ray drive and the hard disk. One of them is free for use by an optional 2nd hard drive (or SSD). The last one is made available as an eSATA port on the back panel. The mini-PCIE slot, as already mentioned, is taken up by the wireless module. In essence, the Core 100-HT BD's motherboard is a notebook motherboard in the mini-ITX form factor.

The Gigabyte mini-ITX (based on the H55) with the USB 3.0 ports can be purchased from Newegg currently for around $100. Since ASRock's version is based on the mobile version of the chipset, and also has a THX certified audio codec chip, the cost is bound to be slightly higher. One must also take into consideration the cost of the Atheros AR9287, which can be bought for around US $15 online. For the purpose of cost analysis, let us assume that one may theoretically be able to purchase a similar motherboard for US $140.

For the form factor and thermal design of the Core 100 HT-BD, only processors with a maximum TDP of 35W are supported. Also, most HTPCs do not require features like Turbo Boost, particularly when their performance exceeds what people have come to expect out of a particular form factor (talking about the Atom nettops) by a magnitude. Keeping in mind the cost of the processors and the nett cost of the system, ASRock has decided to go with the lowest end of the Arrandale spectrum, namely, the Core i3-330M. We feel that this is a very good choice, as the processor is powerful enought for most of today's demanding tasks, particularly from a HTPC perspective.

The integrated GPU is clocked at 600 MHz by default in the system, but it can be easily overclocked to 900 MHz without much effect on fan noise or any concerns about the system heating up. Most HTPC users are more interested in turning down the heat and power consumption. Towards this, attempts are made to undervolt or underclock the CPU. In our opinion, for the Core 100 HT-BD, the savings obtained through these methods are not worth the trouble. Intel's SpeedStep technology is enabled on this system, and we observed that the cores would clock around 940 MHz when doing light browsing tasks, and kick upto 2.14 GHz under heavy load. It is easy to overclock the system too (from within Windows, as well as the BIOS), but the need would probably be never felt in a HTPC usage scenario.

The pricing of the Core i3-330M is available only to OEMs. Our sources, however, informed us that it costs around US $135 in high volume.

The Core 100 HT-BD has two DDR3 slots, both of which are occupied by the 2 GB Nanya DIMMs. One can potentially use 4 GB DIMMs to get 8GB of system memory, but that would be an overkill from the HTPC perspective. ASRock's choice of 4GB is more than enough for the HTPC. 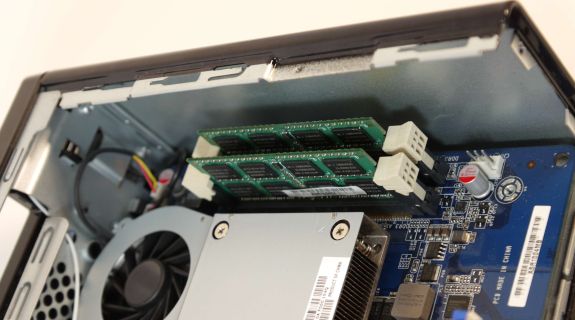 The 2 DIMMs can be bought currently for around $100 in total from resellers in the US.

Since the form factor of the build indicates that the system is more of a notebook, the hard drive inside is a 2.5" model. ASRock has gone in with the Seagate Momentus 5400 rpm drive. While one might prefer a faster drive for installing the OS, there is no doubt that the lower power consumption of this unit makes it an ideal choice for the HTPC. There is enough space inside the system for an additional 2.5" drive, and filling that up with a SSD would be a great choice for the boot drive. The shipped Seagate drive is ideal and capacious enough for HTPC duties. 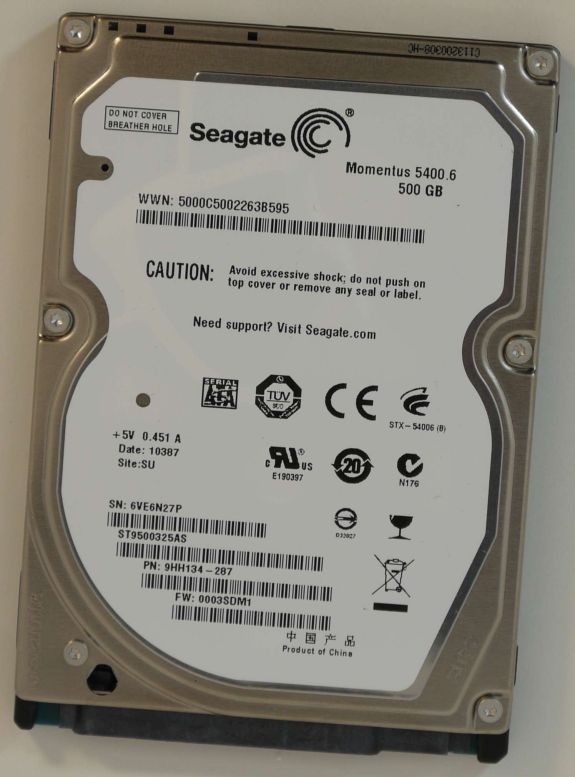 The hard drive can be currently had from Newegg for US $65.

The Core 100 HT-BD model ships with the Lite-On DS-4E1S Blu-Ray / DVD RW drive. Again, this is a model meant for notebooks, with the tray not coming out fully when ejected. It can be found online for around $90 without shipping charges taken into consideration. 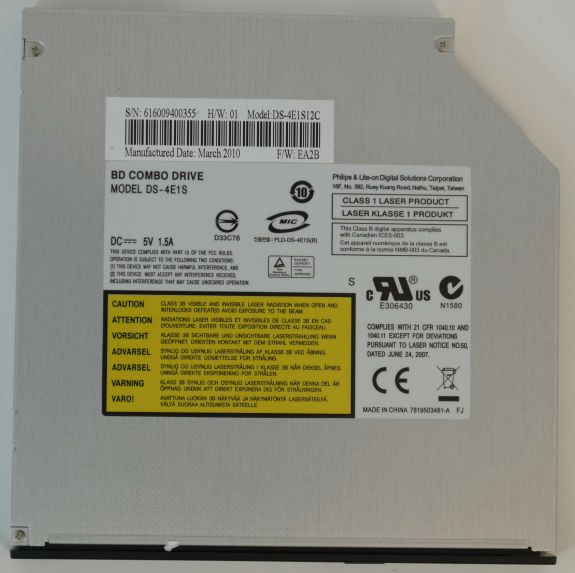 The chassis is obviously custom made for this motherboard. ASRock also throws in the SATA, power cables and screws for the optional 2nd hard drive. Mini-ITX cases with PSUs of much higher rating (the unit comes with an external 90W adapter) can be had for around US $50. So, we estimate the cost of the chassis, power adapter and other similar accessories to be around the same. Note that the unit also ships with an IR based MCE remote. Though the build quality of the remote is not high end in nature, we estimate that it adds around $30 to the cost.

Newegg is supposed to have this HTPC for sale soon around the $700 price point. (The model with the DVD drive instead of the Blu-Ray is already on sale for $650.) With only a $90 premium over a home built HTPC, this is not a bad investment from the value viewpoint. Do note that the cost of the OS and keyboard / mouse have to be added on to this to get a sense of the true cost of the system. Also, we still have to take a look at the unit from various other perspectives. Read on to find out more.