Benchmarks such as ATTO and CrystalDiskMark help provide a quick look at the performance of the direct-attached storage device. The results translate to the instantaneous performance numbers that consumers can expect for specific workloads, but do not account for changes in behavior when the unit is subject to long-term conditioning and/or thermal throttling. Yet another use of these synthetic benchmarks is the ability to gather information regarding support for specific storage device features that affect performance.

OWC claims speeds of up to 1011 MBps, and these are backed up by the ATTO benchmarks provided below. ATTO benchmarking is restricted to a single configuration in terms of queue depth, and is only representative of a small sub-set of real-world workloads. It does allow the visualization of change in transfer rates as the I/O size changes, with optimal performance being reached around 512 KB for a queue depth of 4.

The Elektron is able to hit 1GBps+ for both reads and writes, outperforming the Kingston DT Max across the board, but coming up slightly short against the DIY solutions.

CrystalDiskMark. for example, uses four different access traces for reads and writes over a configurable region size. Two of the traces are sequential accesses, while two are 4K random accesses. Internally, CrystalDiskMark uses the Microsoft DiskSpd storage testing tool. The 'Seq128K Q32T1' sequential traces use 128K block size with a queue depth of 32 from a single thread, while the '4K Q32T16' one does random 4K accesses with the same queue configuration, but from multiple threads. The 'Seq1M' traces use a 1MiB block size. The plain 'Rnd4K' one uses only a single queue and single thread . Comparing the '4K Q32T16' and '4K Q1T1' numbers can quickly tell us whether the storage device supports NCQ (native command queuing) / UASP (USB-attached SCSI protocol). If the numbers for the two access traces are in the same ballpark, NCQ / UASP is not supported. This assumes that the host port / drivers on the PC support UASP.

In sequential workloads, the observations made in the ATTO sub-section carry over. For random workloads, we see the DIY solution using the Realtek bridge coming in second best to the Elektron. However, the DIY ASMedia solution fares better than the Elektron, given that the SK hynix Gold P31 delivers better results than the OWC Aura P13 Pro. That said, the form-factor advantage rests with the Elektron. The Kingston DT Max is geared towards sequential workloads, but is nowhere in the picture when it comes to random access traces.

Our testing methodology for storage bridges / direct-attached storage units takes into consideration the usual use-case for such devices. The most common usage scenario is transfer of large amounts of photos and videos to and from the unit. Other usage scenarios include the use of the unit as a download or install location for games and importing files directly from it into a multimedia editing program such as Adobe Photoshop. Some users may even opt to boot an OS off an external storage device.

Except for the 'Disk-to-Disk' workload, each data set is first placed in a 29GB RAM drive, and a robocopy command is issue to transfer it to the external storage unit (formatted in exFAT for flash-based units, and NTFS for HDD-based units).

Upon completion of the transfer (write test), the contents from the unit are read back into the RAM drive (read test) after a 10 second idling interval. This process is repeated three times for each workload. Read and write speeds, as well as the time taken to complete each pass are recorded. Whenever possible, the temperature of the external storage device is recorded during the idling intervals. Bandwidth for each data set is computed as the average of all three passes.

The 'Disk-to-Disk' workload involves a similar process, but with one iteration only. The data is copied to the external unit from the CPU-attached NVMe drive, and then copied back to the internal drive. It does include more amount of continuous data transfer in a single direction, as data that doesn't fit in the RAM drive is also part of the workload set. 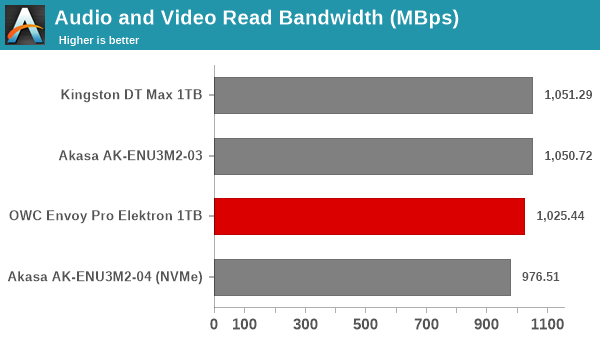 The numbers point to some interesting aspects - for write workloads, the Elektron actually loses out to even the Kingston DT Max, while reads see it coming behind the DIY solutions. However, in the disk-to-disk write case - where more than 300GB of data is transferred, the Elektron manages to get ahead of the DT Max. This points to the SLC cache in the Elektron not being enough to cover the size of our workloads and/or the drive not recovering SLC cache fast enough. Power users may want to dig deeper to understand the limits of each device. To address this concern, we also instrumented our evaluation scheme for determining performance consistency.

Aspects influencing the performance consistency include SLC caching and thermal throttling / firmware caps on access rates to avoid overheating. This is important for power users, as the last thing that they want to see when copying over 100s of GB of data is the transfer rate going down to USB 2.0 speeds.

In addition to tracking the instantaneous read and write speeds of the DAS when processing the AnandTech DAS Suite, the temperature of the drive was also recorded. In earlier reviews, we used to track the temperature all through. However, we have observed that SMART read-outs for the temperature in NVMe SSDs using USB 3.2 Gen 2 bridge chips end up negatively affecting the actual transfer rates. To avoid this problem, we have restricted ourselves to recording the temperature only during the idling intervals. The graphs below present the recorded data.

The first three sets of writes and reads correspond to the AV suite. A small gap (for the transfer of the video suite from the internal SSD to the RAM drive) is followed by three sets for the Home suite. Another small RAM-drive transfer gap is followed by three sets for the Blu-ray folder. This is followed up with the large-sized ISO files set. Finally, we have the single disk-to-disk transfer set. We can see the SLC cache running out mid-way through the second write pass of the AV suite. After that, the write performance saturates at around 500 MBps, and doesn't recover until the disk-to-disk write workloads start. Even the Kingston DT Max delivers better consistency for a longer duration, pointing to a much larger SLC cache that provides significant benefit for DAS workloads. On the flip side, the DT Max performance is abysmal after the SLC cache runs out. Back to the Elektron, we find the thermal performance to be excellent - at the end of the workload, the drive ends up at around 50C (compared to the 76C and 61C of the DIY solutions and 92C of the DT Max).

There are a number of storage benchmarks that can subject a device to artificial access traces by varying the mix of reads and writes, the access block sizes, and the queue depth / number of outstanding data requests. We saw results from two popular ones - ATTO, and CrystalDiskMark - in a previous section. More serious benchmarks, however, actually replicate access traces from real-world workloads to determine the suitability of a particular device for a particular workload. Real-world access traces may be used for simulating the behavior of computing activities that are limited by storage performance. Examples include booting an operating system or loading a particular game from the disk.

The Full System Drive Benchmark comprises of 23 different traces. For the purpose of presenting results, we classify them under five different categories:

PCMark 10 also generates an overall score, bandwidth, and average latency number for quick comparison of different drives. The sub-sections in the rest of the page reference the access traces specified in the PCMark 10 Technical Guide.

The read-write bandwidth recorded for each drive in the boo access trace is presented below. 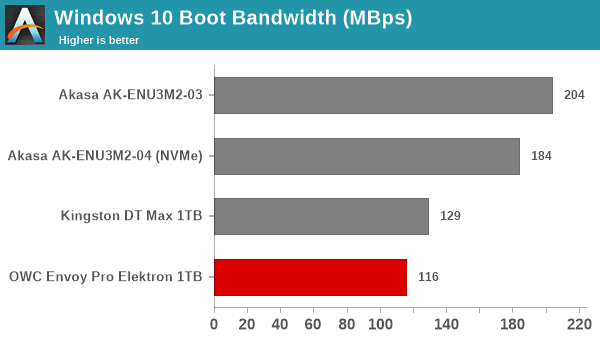 After being subject to pre-conditioning, the state of the Elektron is such that it performs slightly worse than the DT Max in the boot workload, with the DIY solutions far ahead of it. 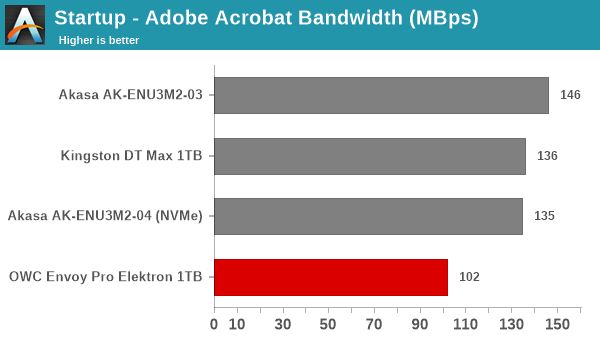 All the creative workloads point to the Elektron delivering acceptable performance, but not enough to surpass the other drives in the comparison list.

The read-write bandwidth recorded for each drive in the exc and pow access traces are presented below. 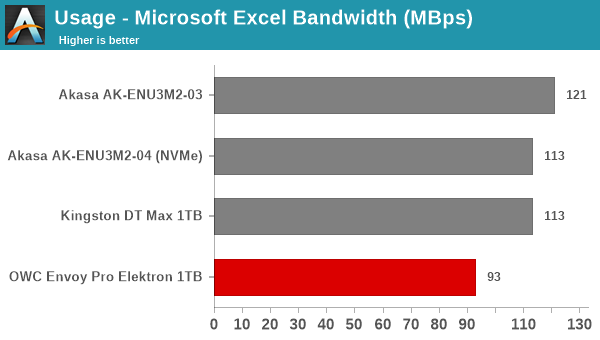 The story seen in the boot and creative workloads repeats here, with the Elektron unable to put up a credible performance for tasks involving office suites.

The read-write bandwidth recorded for each drive in the bf, cod, and ow access traces are presented below. 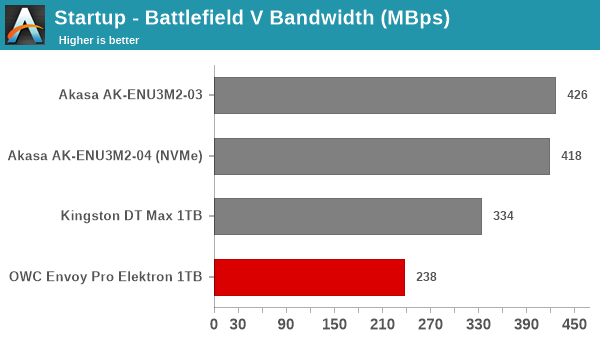 The read-write bandwidth recorded for each drive in the cp1, cp2, cp3, cps1, cps2, and cps3 access traces are presented below. 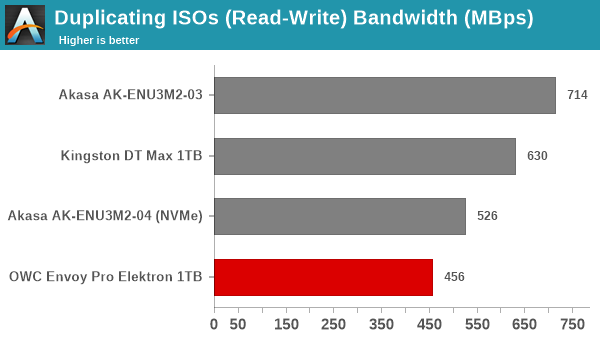 PCMark 10 reports an overall score based on the observed bandwidth and access times for the full workload set. The score, bandwidth, and average access latency for each of the drives are presented below. 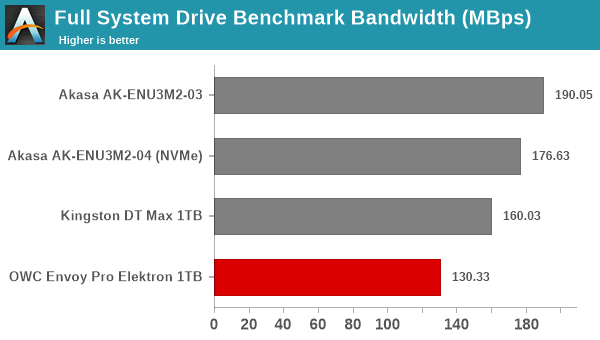 The performance of the OWC Envoy Pro Elektron in the PCMark 10 Storage Bench leaves a lot to be desired. The pre-conditioning adopted by the benchmark is likely putting the internal SSD in a state such that it is not able to live up to its potential in the actual workloads. We did see the drive performing in an acceptable manner in our custom workloads, along with the likely reasons (SLC cache size / recovery rate) for not matching DIY solutions or the DT Max. However, the PCMark 10 storage workloads reveal a much wider gulf in the ability of the Elektron to deliver when subject to stressful long-term workloads.