While battery life is normally one of the key aspects of a notebook computer, gaming laptops are somewhat of an exception. Their high power components often come with significant battery life penalties, which can tend to tether them to a desk. There are extreme cases of this, such as desktop replacement laptops, where they are meant to be plugged in basically all the time, but the Razer Blade 15 somewhat skirts the mid-ground, offering a reasonably thin and light design for mobility with a reasonably decent battery life for non-gaming tasks.

Razer offers two battery configurations, with the Base model coming with a 65 Wh battery while the Advanced model bumps that up to 80 Wh. Razer also offers NVIDIA Optimus, which not all gaming laptops do, allowing the dGPU to be disabled when not needed to conserve power. Countering that though is the QHD display with a 165 Hz refresh rate, which will almost certainly increase the base power draw of the system.

To test battery life, we set all laptops to 200 nits of brightness to make the test as even as possible. 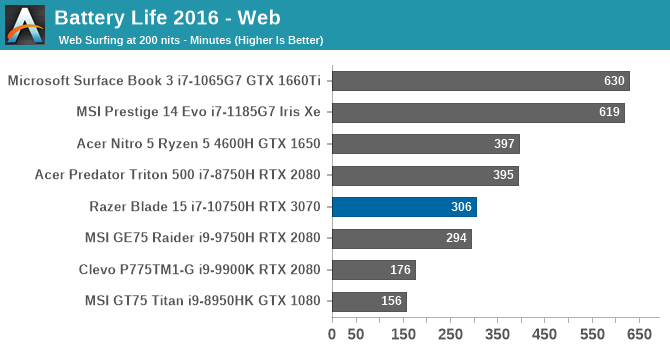 Our web workload is quite demanding as an active workload, rather than just opening a set of pages every few seconds. The Razer Blade 15 ended up about mid-pack in terms of battery life, compared to other gaming systems. The base power draw is just too high to expect the kinds of results you would see on a less-powerful system such as the MSI Prestige 14 Evo. 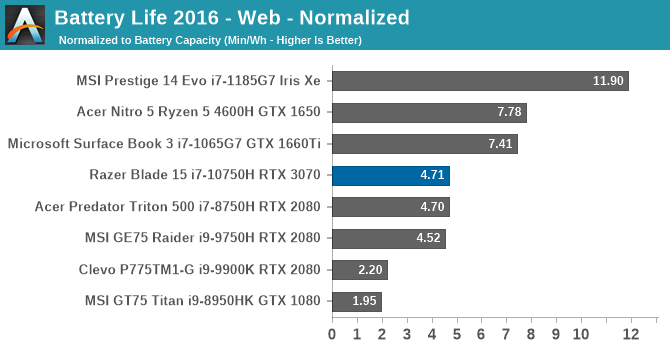 Looking at the battery life with the battery size removed from the equation puts the Razer Blade in a somewhat better light. What is holding the battery life back is that the Razer Blade 15 Base we tested includes just a 65 Wh battery, compared to larger packs in most of the other gaming systems we’ve tested. Still, the minutes of runtime per Wh of the Razer Blade is slightly higher than all of the other proper gaming systems in the comparison. If Razer had shipped us the Advanced model with the larger battery, and all other variables being equal, the Web result would have been right up with the Acer Predator Triton 500. 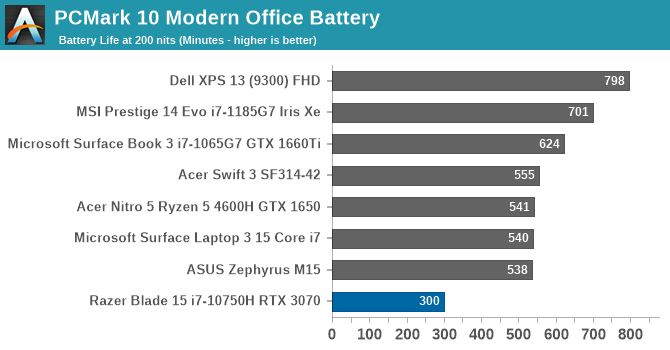 One of the newest battery tests that have been added to the suite is the PCMark 10 Modern Office battery test, which runs a set of workloads from the PCMark 10 benchmark suite in ten minute intervals, so if a device has better performance, it is able to complete the test sooner and get more idle time out of the ten minute window. As it is a new test, we have not been able to run it on most of the other gaming systems we’ve reviewed, so for this comparison, all other devices that have been tested so far are in the list. Several of them include dGPUs, but none of the other devices offer anywhere near as much performance. That, coupled with the relatively small battery in the Razer Blade 15 Base model, drop it to the bottom of this list. 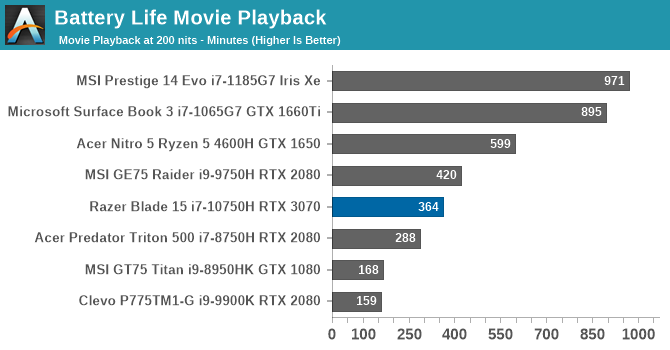 A very common task is video playback, and it also happens to be one of the least demanding, as all modern processors include fixed-function hardware for video decode which allows most of the chip to be idle. The Razer Blade 15 lasted about an hour longer than it did on the web test, slotting in above most of the other gaming systems. A larger battery would really have further helped here. 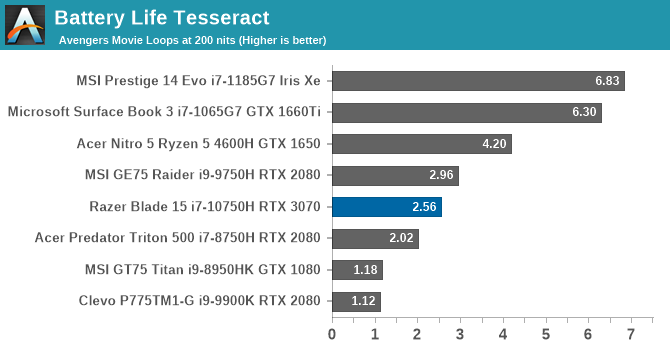 To give another perspective on the battery life results, we divide the runtime in minutes by the length of The Avengers movie, to see how many times you could loop the movie. Gaming laptops are a long ways off Ultrabook-style notebooks such as the MSI Prestige Evo, and the Razer Blade will only give you 2.5 viewings of The Avengers. 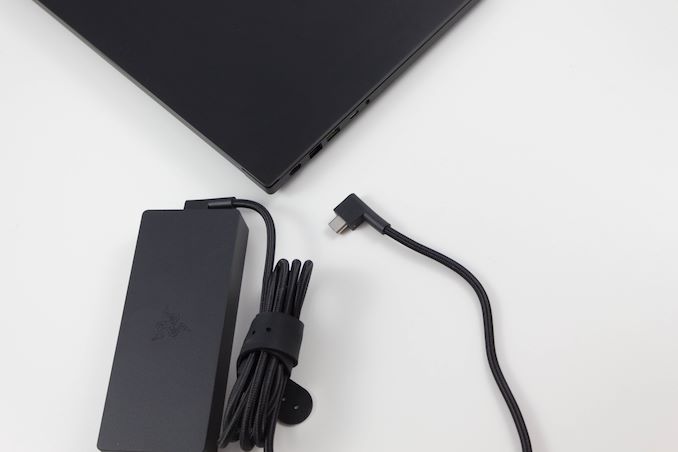 Razer ships all models of the Blade 15 with a compact 230-Watt AC Adapter, and it bears mentioning that they have moved to a proprietary power plug that is rectangular in shape. This allows them to provide a large power feed through a relatively narrow connector, and it fits into the chassis very nicely. Unlike some of the barrel plugs or multi-pin plugs, it does feel like this connector is a lot more robust than pretty much any other gaming laptop system we’ve seen. Time will tell, and a proprietary plug does limit choices if the adapter ever fails, but it feels like a very well designed way to charge this laptop. It also features a 90° angle on the connector which provides simple cable management with the side-mounted cable. 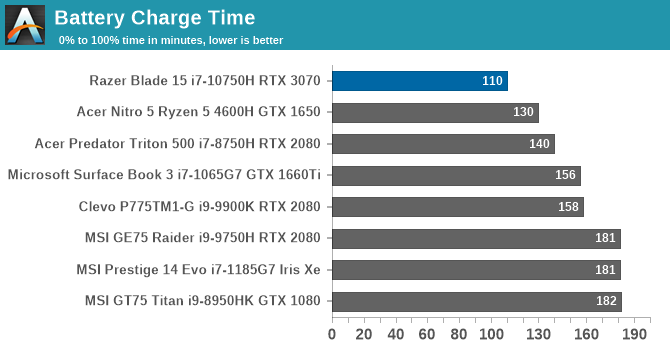 With a high-power AC adapter, and a relatively small battery capacity, the Razer Blade 15 charges from 0% to 100% incredibly quickly. Under two hours to recharge is a great result.