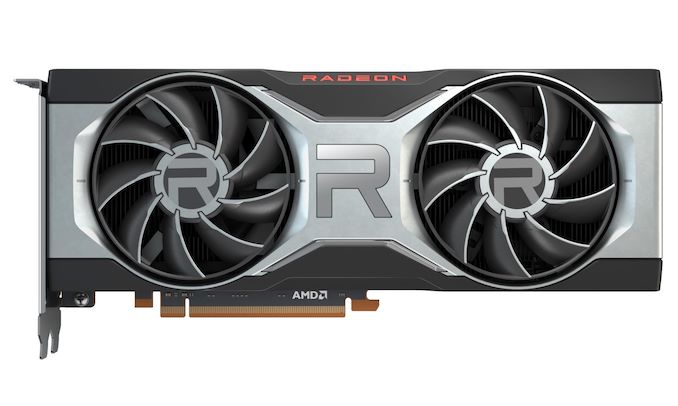 As part of AMD’s latest Where Gaming Begins product presentation, the prolific processor designer announced the next member in its Radeon family of video cards, the Radeon RX 6700 XT. Following the tried and true scale-down release strategy that has come to define the GPU industry, the company is preparing its second RDNA2 GPU to further flesh out its lineup of video cards. Set to be released on March 18th, the Radeon RX 6700 XT will be AMD’s anchor card for 1440p gaming, succeeding the last-generation RX 5700 XT and giving AMD’s product lineup a more wallet-friendly option than their 4K-focused 6800/6900 series cards. The launch for the latest Radeon card will be an all-out affair, with both reference and partner custom cards launching the same day, with prices starting at $479.

Previously hinted at briefly by AMD as part of the company’s CES 2021 presentation, the Radeon RX 6700 XT follows the traditional cascade of new GPU technology into cheaper and less performant cards. With the cheapest RX 6000 series cards up until now (nominally) starting at $579, AMD only began to scratch the surface with their first 6800/6900 cards. Now, with a smaller RDNA2 GPU in-hand, the company can begin to address another and larger segment of the video card market with enthusiast-class cards.

Overall, today’s event from AMD was a bit less than a full reveal, but a bit more than a teaser. AMD isn’t offering a complete technical work-up about the RX 6700 XT two weeks before its launch – if only to have something left to showcase on the 18th – however the company has disclosed the most important points about the card. With 40 CUs, 12GB of VRAM, and a surprisingly high game clock, the RX 6700 XT is a natural fit for AMD’s lineup, paring down their RDNA2 hardware to something more appropriate for the 1440p gaming market that AMD will be targeting. 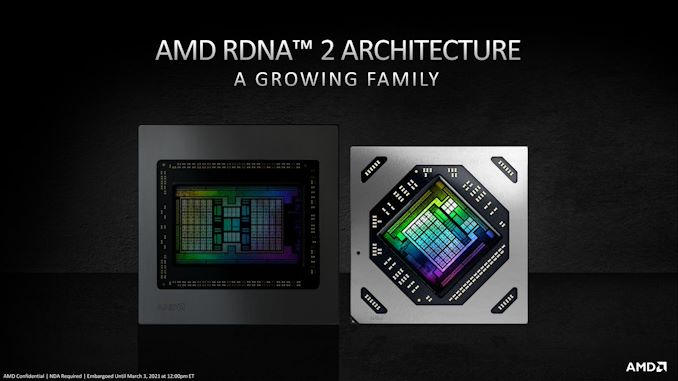 As rival NVIDIA’s own launch cadence has been a couple of months ahead of AMD’s, AMD once again gets the advantage of knowing well in advance how their latest part will compare to its green competition. For all practical purposes, the RX 6700 XT will be going up against NVIDIA’s own 1440p anchor card, the $499 GeForce RTX 3070.  Compared to its rival, the RX 6700 XT will be landing with more memory (12GB vs. 8GB) and, interestingly, a slightly lower $480 price tag. According to their presentation, AMD believes that they’ll trade blows with the RTX 3070, but the decision to undercut NVIDIA is a sign that we shouldn’t expect the two cards to be perfectly matched.

Taking a look at the specifications for the RX 6700 XT, at the heart of the card is AMD’s second RDNA2 GPU. The company hasn’t given us a name, but based on their usual naming convention we expect that this is Navi 22. Similarly, while we’re waiting on AMD for final confirmation of a few specifications, a picture really is worth a thousand words in this case; AMD’s heavily stylized image of the GPU shows a chip that’s almost half of Navi 21, underscoring the difference between the two GPUs. 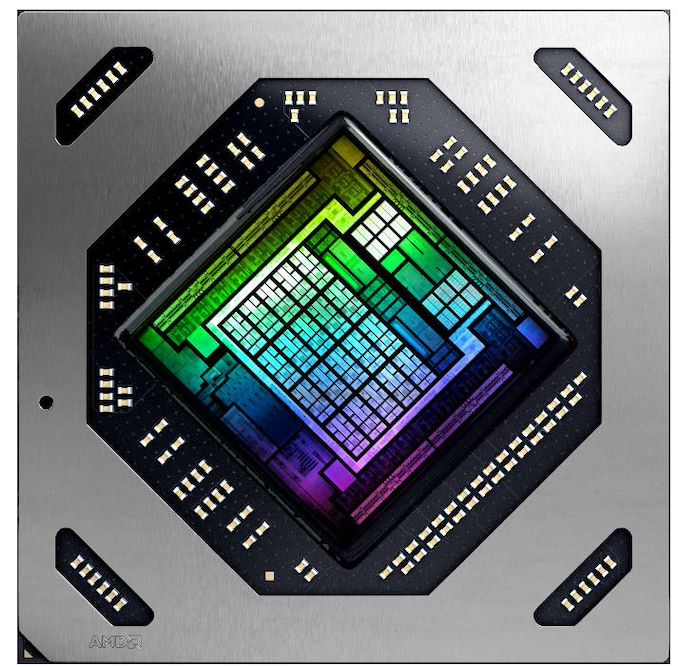 In the case of the RX 6700 XT, AMD is seemingly shipping out a fully-enabled Navi 22 chip. RX 6700 XT has 40 CUs, 20 fewer than on RX 6800, or for a generational comparison, the same number as the RX 5700 XT. And while AMD hasn’t disclosed the number of ROPs on the chip, at this point there’s no reason to think it’s anything other than 64 ROPs, making the RX 6700 XT a pretty straightforward derivative of AMD’s more powerful Radeon parts.

What does stand out, however, are the clockspeeds AMD is targeting. The company is advertising an official game clock – that is, the average clockspeed they expect for typical gaming scenarios – of up to 2424MHz, well above the game clocks of the other RX 6000 series parts (and never mind the last-gen RX 5700 XT). Simply put, the RX 6700 XT looks like it’s going to be clocked very high by GPU standards. One of the core architectural goals of RDNA2 was to allow for much higher clockspeeds, and it looks like the resulting architecture is finally going to get to fully spread its wings in that respect with the RX 6700 XT.

Notably, this means that on paper the card should compare quite favorably to the RX 6800, offering 89% of its rated compute, shader, texture, and pixel throughput. Of course there’s more to performance than raw specifications, but it’s a sign that the RX 6700 XT should not be underestimated by having “just” 40 CUs. For the same reason, it will be very interesting to see just how the new card compares to the last-gen 5700 XT, as this will be the most apples-to-apples comparison we’re likely to get between the two architectures.

Meanwhile when it comes to memory, AMD has similarly scaled down both the size of their memory bus and the Infinity Cache relative to their more powerful cards. The 192-bit memory bus is three-quarters the size of the one found on the 6800/6900 series, and fittingly, AMD is giving the card three-quarter the Infinity Cache, with 96MB of the on-die SRAM available. At this point AMD isn’t disclosing the speed grade of GDDR6 memory they’re using – if they’re sticking with 16Gbps or going down to 14Gbps – so we don’t have the final memory bandwidth numbers for the card. But even with the more conservative 14Gbps, that still gives the RX 6700 XT at least 336GB/sec of bandwidth, which works out to a slightly better bandwidth-per-ALU ratio than the 6800/6900 cards. Overall, AMD’s Infinity Cache helps to curb the need for memory bandwidth, but at the same time a bit more bandwidth certainly never hurts when it comes to overall gaming performance. 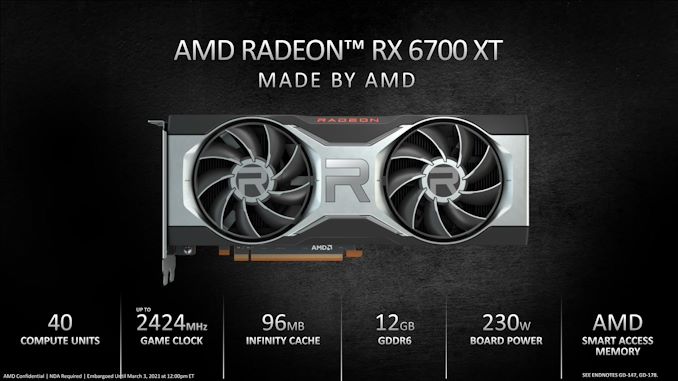 This 192-bit memory bus is also why the RX 6700 XT ends up with an unusual 12GB of VRAM. Though ultimately a technical necessity, for AMD this is also an advantage they can tout over NVIDIA’s competing RTX 3070 card, since it means they have 4GB more VRAM than their competition.

As for power consumption, AMD is rating the RX 6700 XT at 230W total board power. This is only 20W below the RX 6800, so on paper the power consumption of the card will only be marginally lower than the next card up in AMD’s stack. At the same time, the performance on paper looks to be fairly close as well. Otherwise it’s consistent with AMD’s power consumption for this tier of cards; the RX 5700 XT was only 5W lower at 225W.

With the launch of the RX 6700 XT set to take place on March 18th, AMD is looking to put as many video cards into the channel as possible. This means that AMD and its board partners will simultaneously launch both AMD’s reference card, as well as the partners’ custom cards. Typically for AMD the reference cards come first, so the company is pitching this as a way to get more cards on to retail shelves than they would otherwise be able to do. 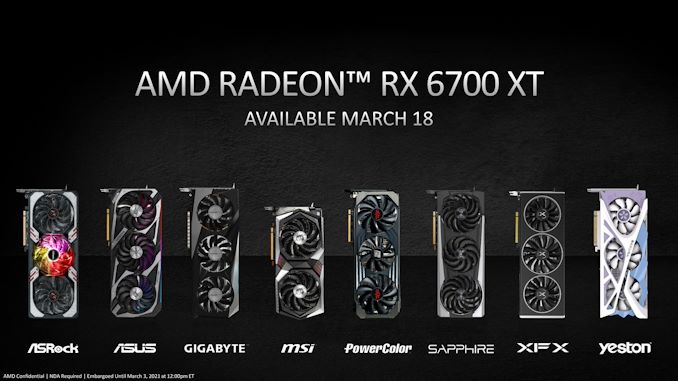 As a result, you’ll see a full gamut of cards at launch. From the brief slide on the matter in AMD’s deck, it looks like most of these cards will be triple fan cards – and I wouldn’t be surprised if all of them were using the same PCB as well. Meanwhile AMD’s official reference card will be a dual fan card, though judging from the length it may not be any shorter than the board partners’ triple fan cards.

Taking a quick glance at the photos AMD has posted of their RX 6700 XT reference card, it looks like it will have the same port configuration as their other RX 6000 series cards, which is to say a trio of DisplayPorts as well as a single HDMI port. As for the board partners, we’ll have to see just what they’re cooking up, but I wouldn’t expect them to be much different.

Finally, AMD has stated that they’re also going to be priming more OEMs than usual with the RX 6700 XT as a third pillar of sorts to better ensure some kind of ongoing retail availability of the card. Despite AMD’s best efforts, retail RX 6700 XT cards are virtually guaranteed to sell out within hours (if not sooner) due to how starved the video card market is. So the company wants to at least give customers another avenue towards getting a modern video card by supplying it as part of a complete system, especially as crypto miners seldom buy whole OEM systems.

Moving on, as mentioned earlier, AMD is primarily chasing the 1440p gaming market with this card. AMD says that the RX 6700 XT should be able to offer 1440p gaming at max settings, and while this remains to be confirmed with benchmarks, based on what we’ve seen with the other RX 6000 series cards thus far it should be a reasonable goal for the hardware. Games making heavy use of ray tracing will be the one wild card here, as those workloads still tend to slam video cards across the board. For that reason, NVIDIA relies pretty heavily on DLSS here to make up the difference, and similarly, AMD is likely going to need their still in development Fidelity FX Super Resolution tech to keep framerates up. 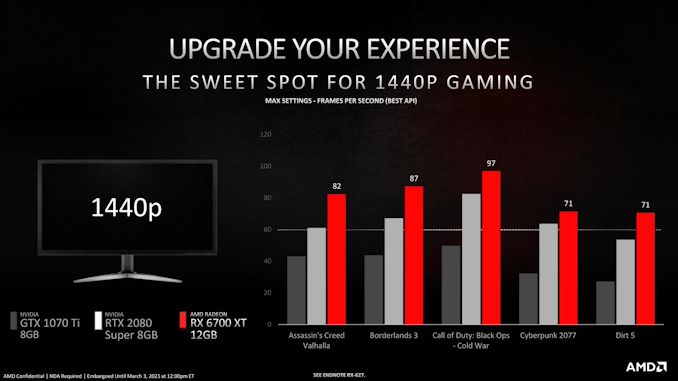 For gamers eyeing an upgrade, expect to see AMD primarily target owners of hardware two generations out. So RX Vega, GTX 1070/1080, and similarly old (if not older) cards. AMD hasn’t disclosed any performance figures versus the RX 5700 XT, but based on what we’ve seen from the other RX 6000 series cards, the RX 6700 XT is unlikely to be a suitably large upgrade over cards that are just a generation old.

Otherwise, for new system builders, the RX 6700 XT will largely go up against NVIDIA’s RTX 3070 and RTX 3060 Ti. At $480, the RX 6700 XT isn’t quite an exact counterpart to either card, but in terms of nominal pricing and performance expectations, AMD is positioning it closer to NVIDIA’s mainstay 1440p card. Since the pricing offers a subtle hint that the RX 6700 XT is unlikely to quite pull even with NVIDIA’s card, it will be interesting to see how third-party benchmarks turn out. With 12GB of VRAM, the RX 6700 XT could play a bit of a spoiler to the RTX 3070 – at least for those who can get their hands on either card. 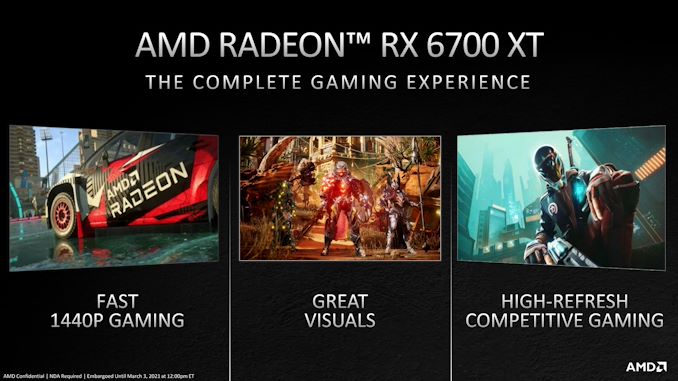 And that, perhaps beyond all else, will be the issue for AMD going forward. Like every other video card released this generation, they fully expect the RX 6700 XT to sell out as well. Even though AMD’s cards aren’t quite as useful for mining Ethereum as NVIDIA’s cards are – due in large part to AMD’s decision to go light on the memory bandwidth – they are still good enough to turn a profit, and that’s enough to make them highly desirable. So one way or another, AMD is going to have little problem selling all of their RX 6700 XT cards.

In any case, be sure to check back in on March 18th for the full details on AMD’s next video card, and a more complete picture on how it fits in to the broader video card market. 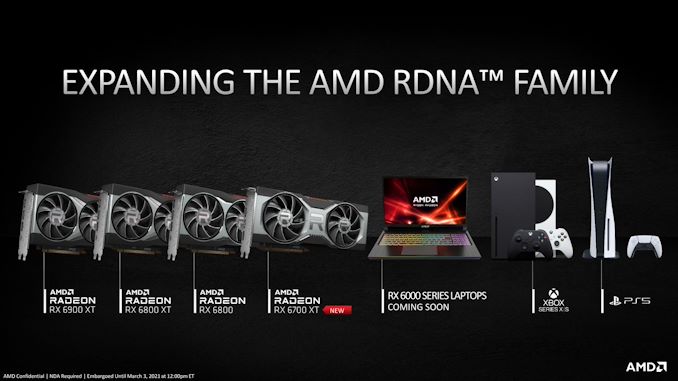