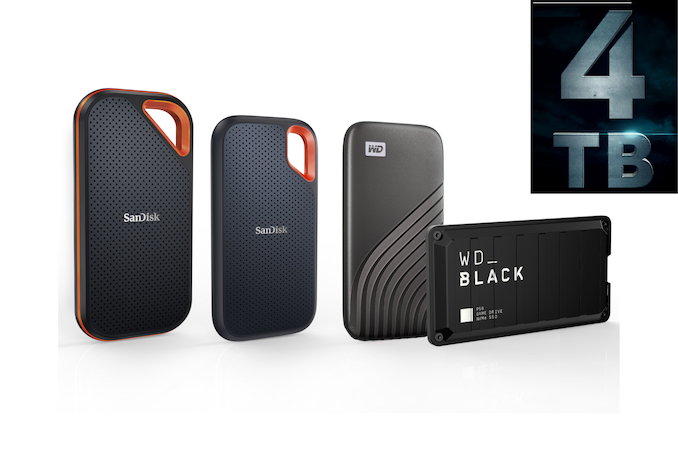 Under the WD branding, the My Passport SSD with its hardware encryption capabilities targets the average consumer who wants to back up work files, user-generated multimedia, and personal files securely. The SanDisk Extreme and Extreme PRO targets professional users creating content on-the-go outside a standard office environment with its IP55 rating and two different speed levels - 1GBps-class for the Extreme and 2GBps-class for the Extreme PRO. The WD_BLACK P50 is meant for gamers who need fast and high capacity storage for their games and do not mind paying a premium for a stylish device fulfilling those requirements.

Currently, all four families mentioned above top out at 2TB. Today, Western Digital is announcing 4TB versions in all four, with market availability slated before the end of February. Internally, the four portable SSDs are all moving to a double-sided SN750-class NVMe drive. This means the same BiCS4 3D TLC NAND flash along with an in-house SSD controller. 256-bit hardware AES support is built-in, and enabled on all but the WD_BLACK P50 drive.

In terms of pricing, the 4TB versions of the 10Gbps-class SanDisk Extreme and WD My Passport SSD are coming out with a MSRP of $700 and $680, while the 20Gbps-class SanDisk Extreme PRO and WD_BLACK P50 for the same capacity are priced at $750. The premium is not only for the bridge chip with better performance, but the premium industrial design with liberal aluminum usage also. Interestingly, the 4TB internal drive is priced at $800 on WD's site.

The physical dimensions of all the 4TB versions are similar to the lower-capacity ones in each family except for the WD My Passport SSD. The move to a double-sided NVMe drive forces the 4TB version of the My Passport SSD to become 0.8mm thicker (9mm to 9.8mm). The drive's sleek nature was noted in our review of the 1TB version, and this thickness increase is a small price to pay for the increased capacity. 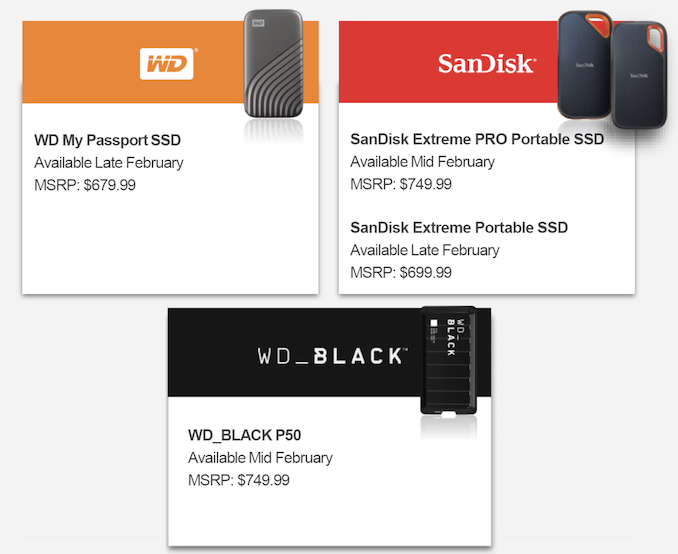 At price points of $680 - $750, it is evident that these are premium portable SSDs. 4TB of high-performance flash storage in a compact bus-powered enclosure was pretty much unimaginable even 5 years ago, and as the technology makes its way into the market, the premium is only expected. Professionals may not balk at such price points, as they realize the benefits of such drives for their use-cases and be willing to treat them as business expenses. To note, these are not the first such 4TB drives in the market - In fact, Sabrent's Rocket XTRM-Q is available in capacities up to 8TB, and works with optimal performance in both Thunderbolt 3 (22Gbps) and USB 3.2 Gen 2 (10Gbps) modes. The 4TB XTRM-Q is priced at $700, and the new 4TB portable SSDs from Western Digital straddle that price point. However, Western Digital's value proposition is in the use of mature and proven 3D TLC flash in the drive (compared to the QLC NAND used in the Rocket XTRM-Q). The Sabrent offering does have Thunderbolt 3 performance up its sleeve. But, this 3D TLC offering at very similar price points should help push the pricing of high-capacity QLC-based drives further down. And, that is definitely good news for consumers.

Interested in more of the latest industry news? Check out our CES 2021 trade show landing page!