As always, we'll start things off by testing things at full speed/performance. Our maximum speed testing is performed with both the fans and the pump powered via a 12V DC source. This input voltage should have the pump and fans matching the speed ratings of the manufacturer. According to Corsair’s specifications, the MagLev fans included with the H150i Elite Capellix should have a rotational speed of 2400 RPM. Our tachometer indicated that the fans were rotating at an average speed of 2370 RPM, very close to their rated specifications. 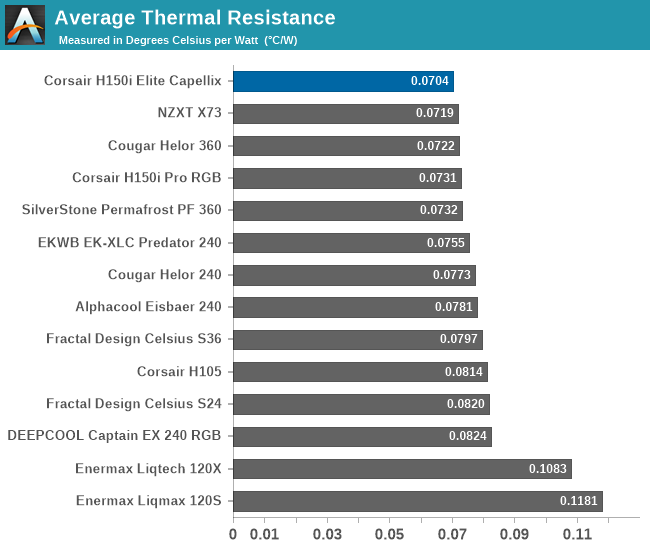 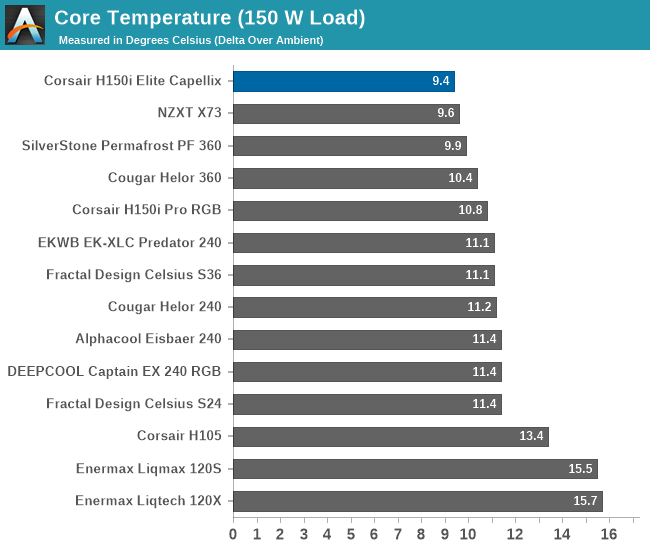 The Corsair H150i Elite Capellix seems to be getting the best thermal performance out of every similarly sized AIO cooler that we have tested to this date, outperforming NZXT’s X73 by a whisker. The performance seems to be fairly stable across most of the load range, offering predictable performance regarding of the load, with the exception of very low loads where the temperature difference is far too small for appropriate heat transfer between the mediums. 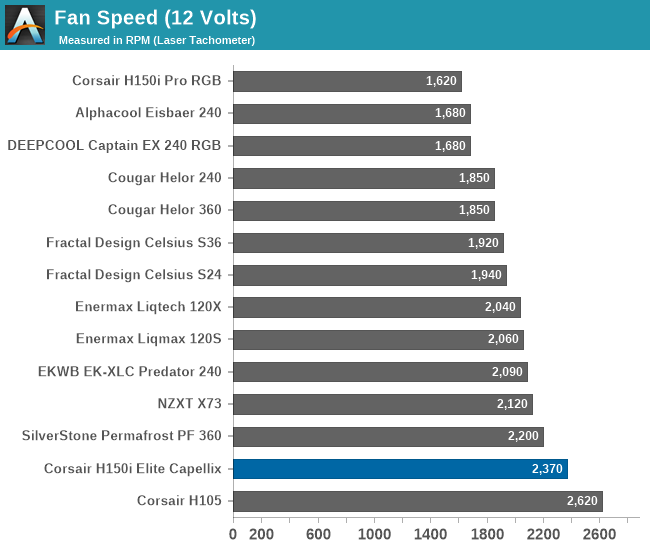 The average thermal resistance of 0.0704 °C/W is impressive but users need to keep in mind that this performance comes with the fans rotating at their maximum speed. With the powerful fans of the H150i Elite Capellix, this results to a sound pressure level of 43 dB(A), a relatively high figure for a CPU cooler. 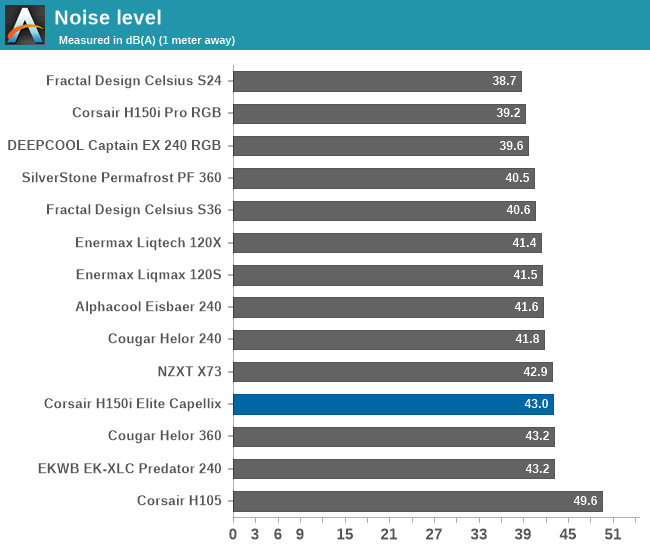 Using a PWM voltage regulator, we reduced the speed of the fans manually down to half their rated speed. At this setting, the 120 mm MagLev fans of the H150i Elite Capellix rotate at 1220 RPM. Since the pump’s speed cannot be controlled directly, we had the Commander CORE module attached to a PC and set the pump to operate in its “Quiet” mode while testing. 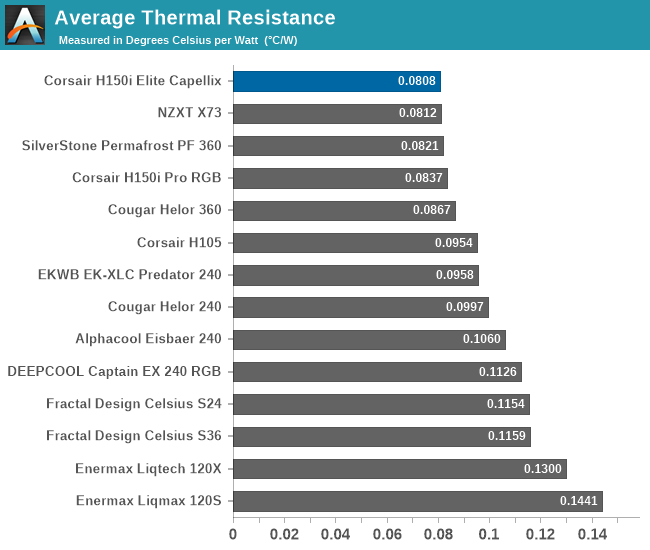 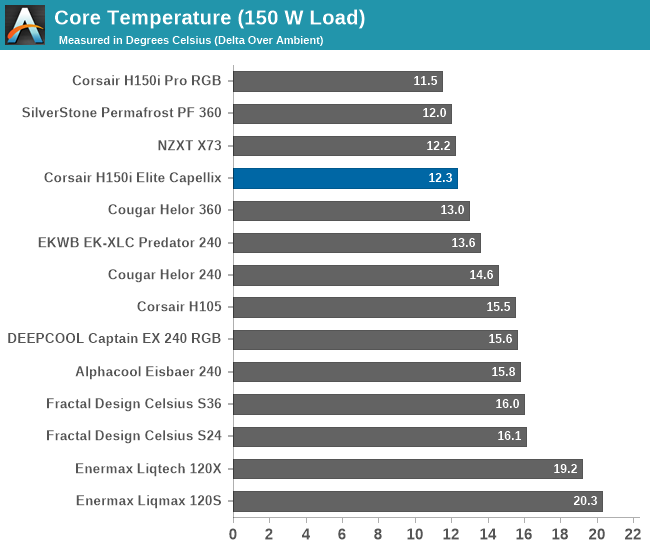 When it comes to thermal resistance, Corsair’s latest AIO cooler initially seems to be slightly outperforming all of the 360 mm coolers that we have tested to this date. The average thermal resistance of 0.0808 °C/W is almost identical to the figures we received from the recently released NZXT X73, with Corsair’s MagLev fans giving the H150i Elite Capellix a small advantage in terms of acoustics. 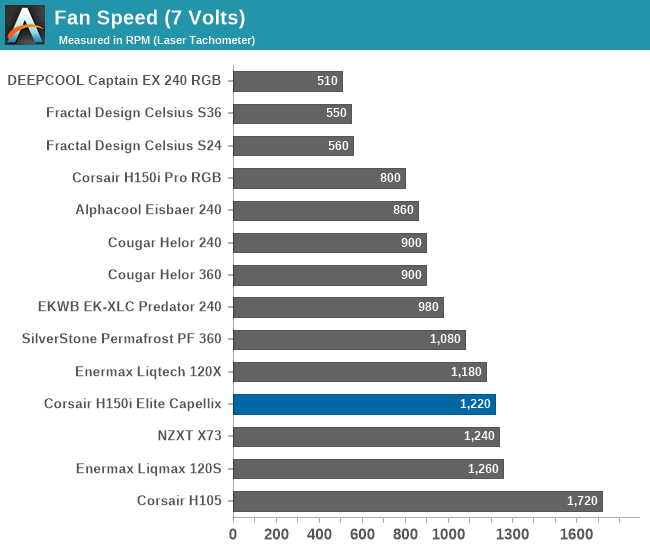 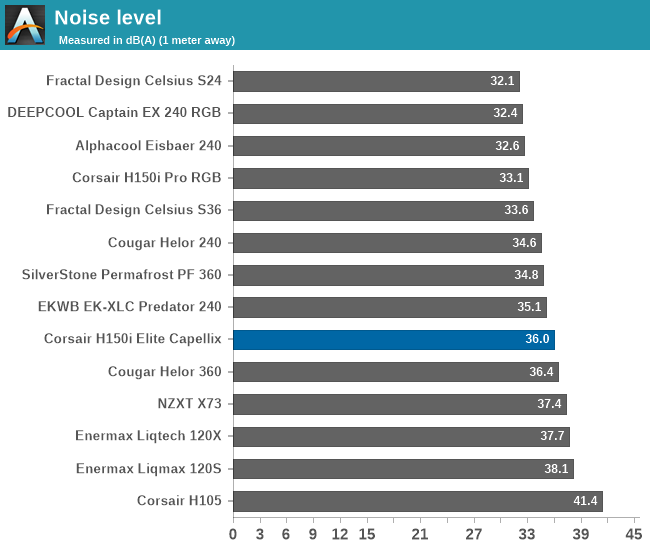 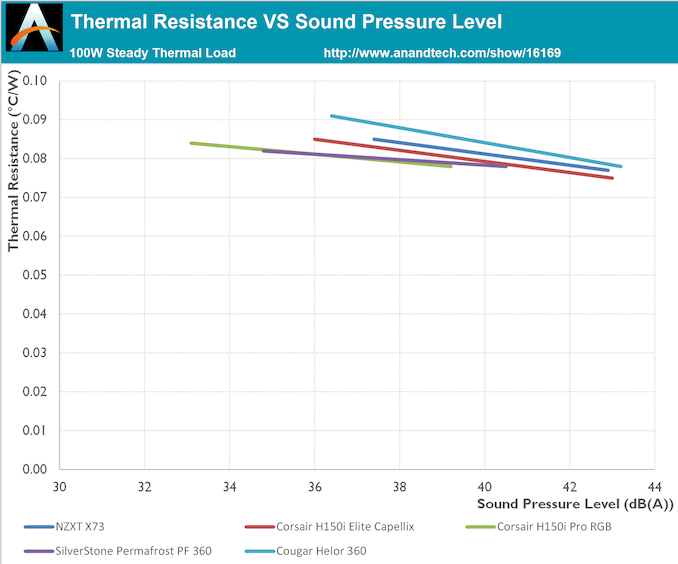 This graph reveals interesting information regarding the overall performance of the H150i Elite Capellix. Although it does manage to get the best thermal performance out of every other similarly sized cooler, it can be seen that the older H150i Pro RGB actually outperforms it when taking the acoustics into account. This is because of the fast 2400 RPM fans that Corsair includes with the H150i Elite Capellix and our two-point testing methodology. Theoretically, the H150i Elite Capellix would perform identically or nearly identically with the H150i Pro RGB if both coolers were to share the same fans. It is also proof that the long and thin 360 mm radiator benefits very little from higher airflow, as its heat transfer surface is far too large to allow for significant temperature differences even if the airflow is low.