The NZXT N7 Z490 Motherboard Review: From A Different Direction

Although the N7 Z490 is NZXT's latest motherboard on the market, the ASRock OEM does the heavy lifting regarding the firmware, with all the hallmarks of an ASRock BIOS, with a custom NZXT GUI. The interface includes a black background with grey and white text, with some vibrant purple accentuation. 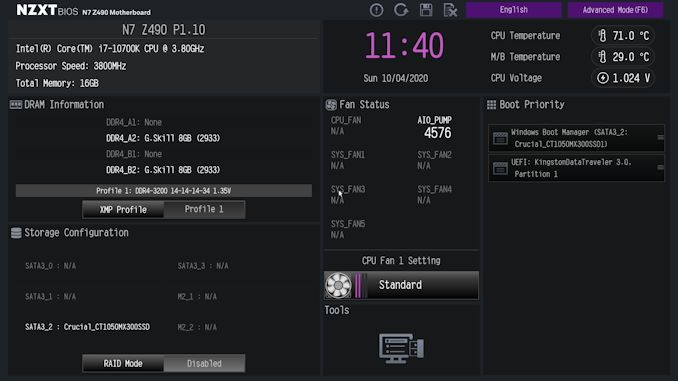 The NZXT/ASRock UEFI firmware includes two primary modes, basic and advanced. Looking at the basic mode, it includes a basic list of information on the installed hardware, with some function through the X.M.P 2.0 profile enabler, which can be done at the click of a button. Users can alter the CPU fan setting in the basic mode, and enable or disable RAID mode, and set a boot priority, and that's about it. It does include basic monitoring for the board 4-pin fans. 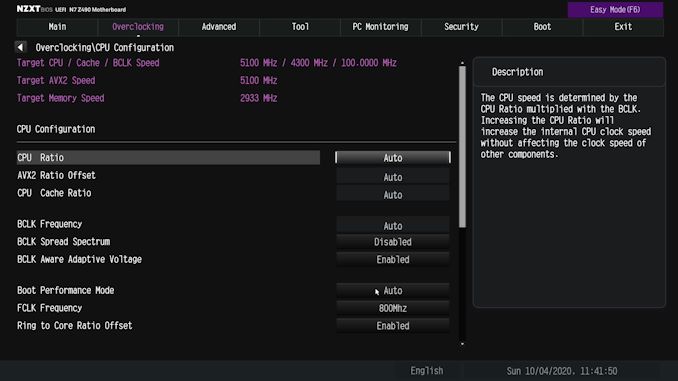 A simple press of the F6 key will alternate between the basic and advanced modes, with the latter featuring the more comprehensive list of options for users to customize. All of the boards overclocking functions can be found within the Overclocking menu, with all three core menus including CPU, DRAM, and voltage, each getting its own section. Within the CPU area, users can adjust the CPU and BCLK frequencies to overclock the CPU, with options for AVX2 ratio offset adjustment and CPU Cache ratio control. Users can tweak memory settings in the DRAM section, with plenty of options for altering memory latencies, although users can enable X.M.P 2.0 profiles on compatible memory within three clicks.

Outside of the typical overclocking and monitoring functions, there isn't much in the way of features with NZXT's firmware with a basic fan profile customizer. NZXT keeps things simple with the GUI, functionality. However, all of the relevant settings for customizing Intel's Thermal Velocity Boost are present, so all of the tools needed to squeeze more performance out of Intel's Comet Lake processors is available to use. The firmware itself is strong and stable, with more than enough for users to sink their teeth into, without over complicating things where it doesn't need to be. 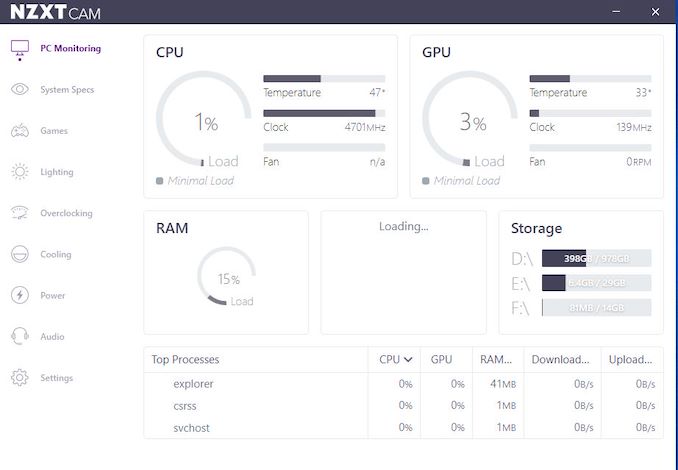 The CAM software is one of NZXT's most prominent software packages in the companies history and is used across most of its devices. Relating directly to the N7 Z490, the NZXT CAM software allows plenty of functionality, including power options, when used with compatible NZXT power supplies, enabling the boards' customization 4-pin cooling headers, as well as an integrated section for the onboard audio.

It should be noted that the version of the NZXT CAM software we were sent from NZXT for the N7 Z490 review is currently still in BETA, and as such, doesn't seem completely polished off. Despite having the drivers for the Realtek ALC1220 HD audio codec installed, the audio section wasn't functional. The overclocking section includes a large warning screen that provides a caution for users looking to make adjustments. This is especially useful for regular users without much experience who go browsing and tweaking settings without much thought for consequences that overclocking without knowledge can have. Unfortunately, the CAM software at present doesn't allow for CPU or memory overclocking within Windows, with the only VGA currently supported within CAM.

The games section provides a list of playtime for each game played used, which can be useful for monitoring how much time is actually spent gaming, especially when users should be working. Alas, it could be useful for me, who spends a lot of the evening gaming, perhaps too much!