As we wait for the big server juggernaut to support PCIe 4.0, a number of OEMs are busy creating AMD EPYC versions to fill that demand for high-speed connectivity. To date there have been two main drivers for PCIe 4.0: high-bandwidth flash storage servers, and high performance CPU-to-GPU acceleration, as seen with the DGX A100. As the new Ampere GPUs roll out in PCIe form, OEMs are set to update their portfolio with new PCIe 4.0-enabled GPU compute servers, including GIGABYTE, with the new G242-Z11.

One of the key elements to a GPU server is enabling airflow through the chassis to provide sufficient cooling for as many 300W accelerators as can fit, not to mention the CPU side of the equation and any additional networking that is required. GIGABYTE has had some good success with its multi-GPU server offerings, and so naturally updating its PCIe 3.0 platform to Rome with PCIe 4.0 was the next step. 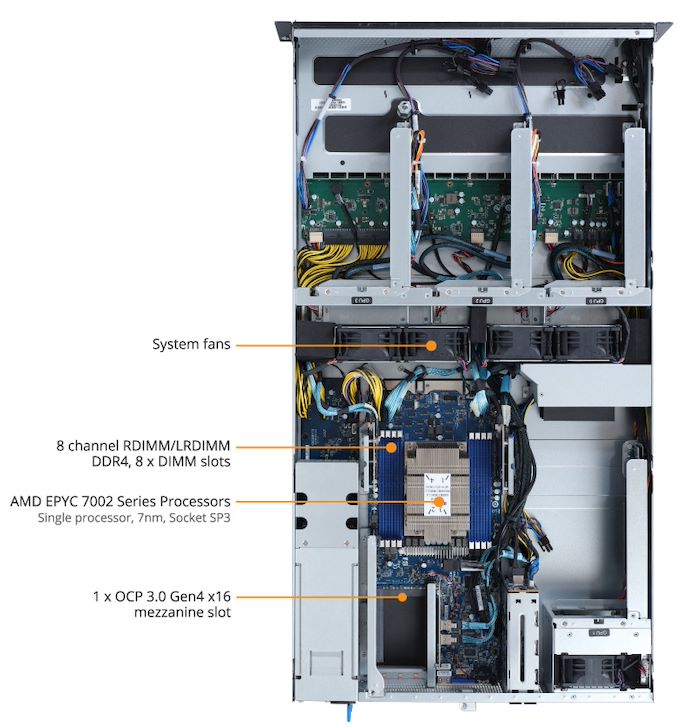 The G242-Z11 is a 2U rackmount server that supports four PCIe 4.0 cards with a full x16 link to each. That includes the new A100 Ampere GPUs, as well as AMD MI50 GPUs and networking cards. The system supports any AMD Rome EPYC processor, even the 280W 7H12 built for high-performance tasks, and also has support for up to 2 TB of DDR4-3200 across eight channels with the MZ12-HD3 motherboard.

With these sorts of builds, it is often the periphery that helps assist integration into current infrastructure, and on top of the four PCIe 4.0 accelerators, the G242-Z11 supports two low profile half-length cards and one OCP 3.0 mezzanine card for other features, such as networking. The G242-Z11 also has support for four 3.5-inch SATA pays at the front, and two NVMe/SATA SSD bays in the rear. Power comes from dual 1600W 80 PLUS Platinum power supplies. Remote management is controlled through the AMI MegaRAC SP-X solution, which includes GIGABYTE proprietary server remote management software platform.

The new G242-Z11 will be available from September. Interested parties should contact their local GIGABYTE rep for pricing information. 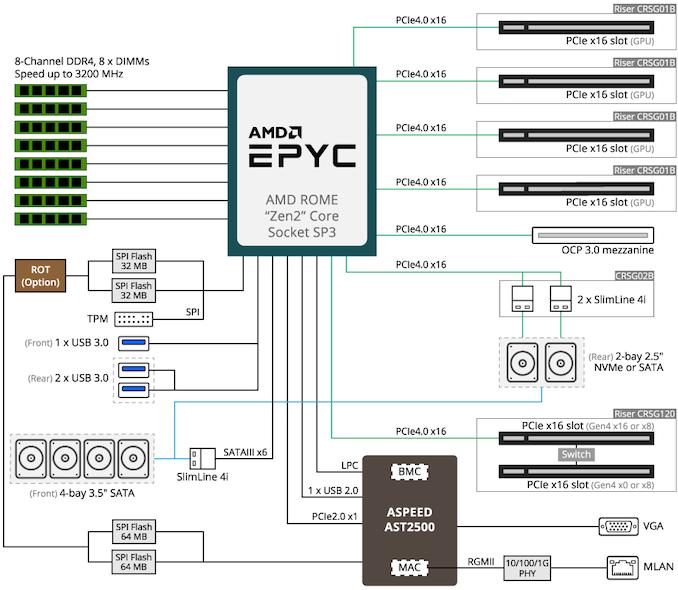