System performance of the new OnePlus 8 phones shouldn’t be a big concern given the Snapdragon 865 chipsets as well as the fact that both phones have high-refresh rate displays. Still, software can play a big role in the experience of a device, so let’s look at our typical system performance benchmark suite: 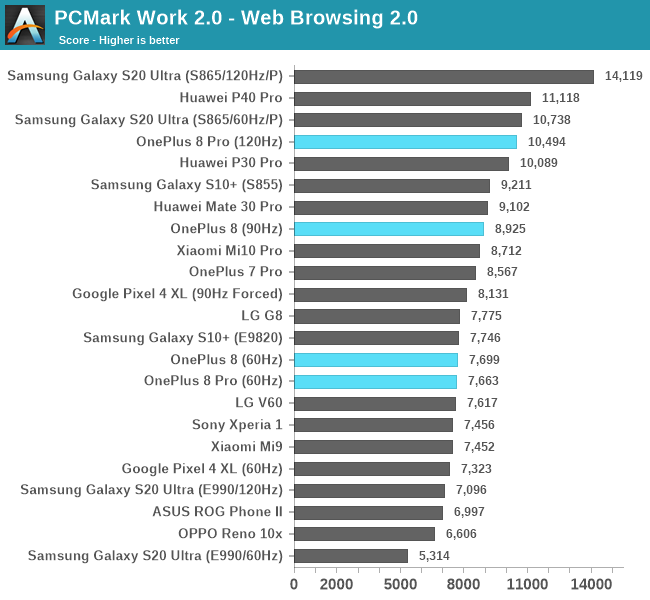 The web-browsing workload is a little bit lighter in terms of load, and is most sensitive to the actual performance responsiveness of a device’s scheduler. The OnePlus 8 phones in their regular 60Hz mode don’t seem to be all that convincing as they’re seemingly tuned to be more conservative than most other phones on the market. Increasing the refresh rate to respectively 90Hz and 120Hz ups the scores, but still not quite as high as what other phones are achieving. 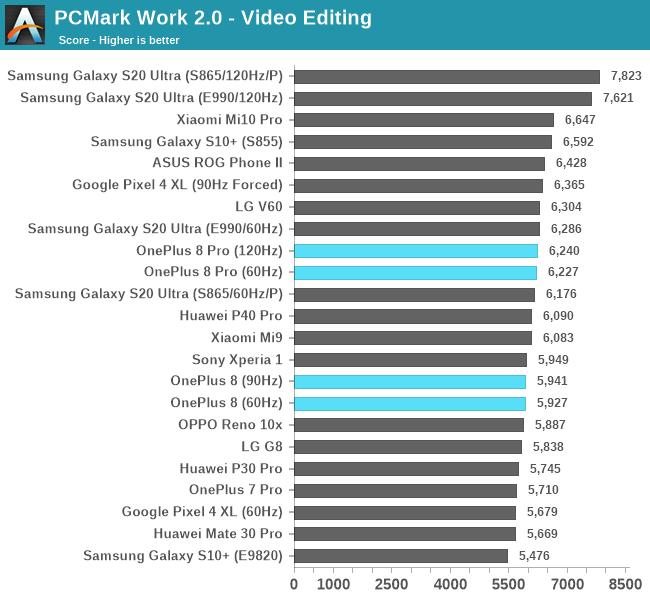 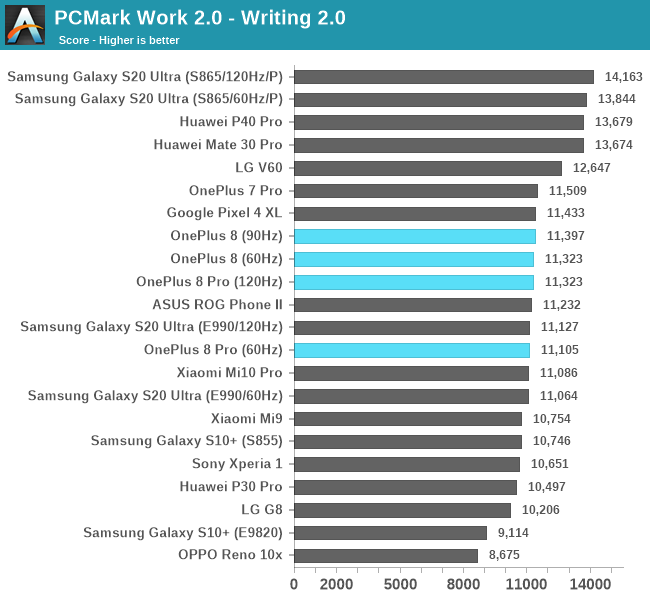 The writing sub-test of PCMark is the most representative of a device’s performance and how it will compare in the real world. Here the OnePlus 8 phones also fare relatively average in their rankings. Amongst the Snapdragon 865 devices it’s on par with the Xiaomi Mi10 Pro, but lose out to the LG V60 and particularly the Samsung S20 Ultra which has a considerable lead. Samsung usually tunes their BSP software more than other vendors and this can be seen here in particular. 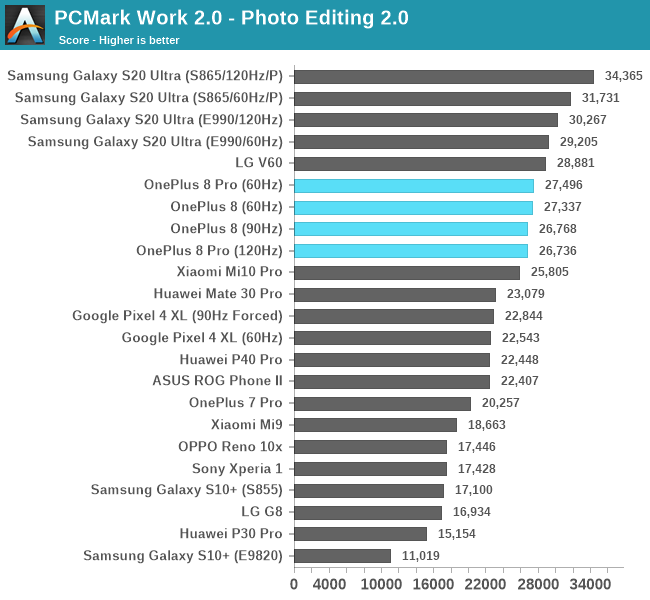 In the GPU-bound Renderscript photo editing test we see a similar ranking, the new generation devices are the top scoring phones but the OnePlus 8 falls a bit short of the V60 and S20. 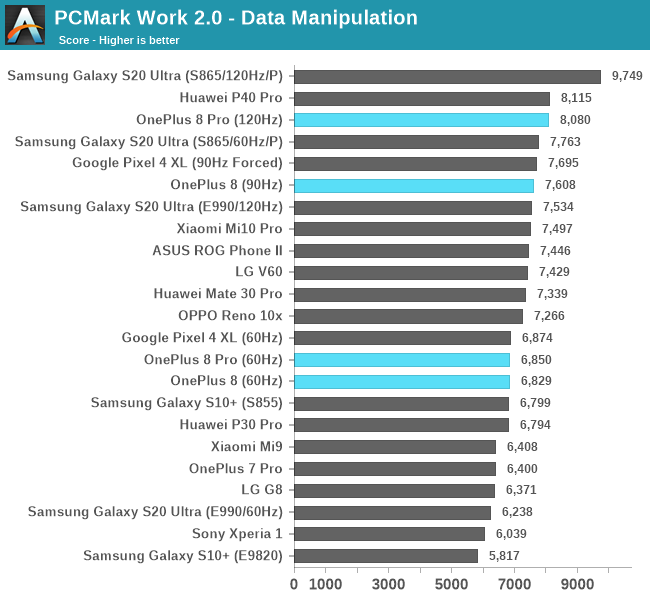 The data manipulation score is also very sensitive to performance scaling speed – at 60Hz the OnePlus devices aren’t particularly noteworthy, but at 90/120Hz they more closely match up the top performing devices. 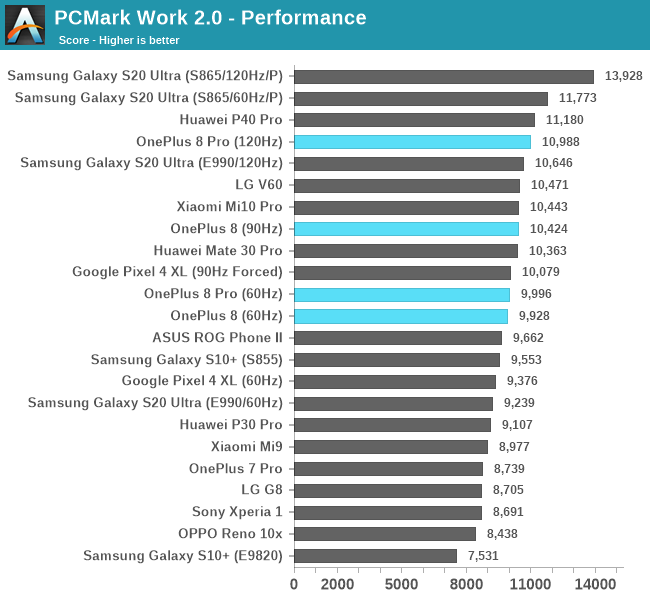 Overall, in the PCMark ranking the OnePlus 8 phones do well, although there’s a lot of other phones which seem to have more aggressive scheduler settings that are able to distance themselves more from the pack, in particular Samsung’s S20 series with the Snapdragon 865. 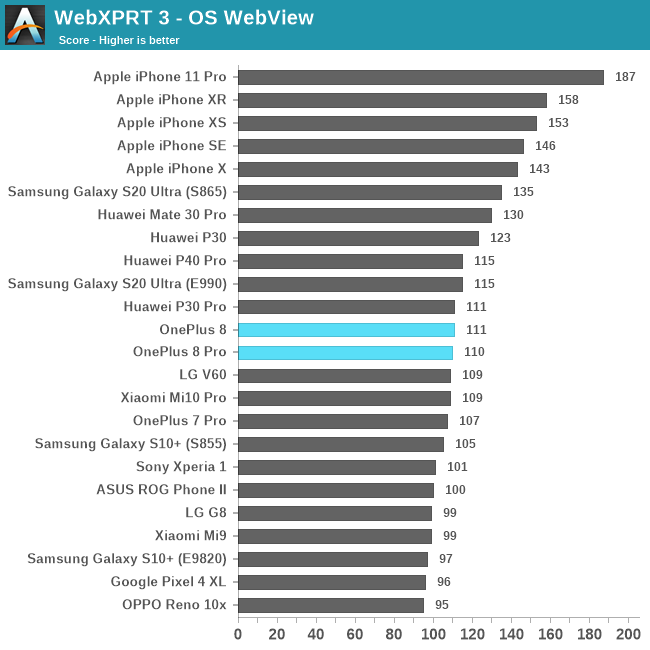 In the browser based benchmarks, we again see that the OnePlus 8 phones generally fall in line with other phones of its generation such as the V60 and the Mi 10 Pro, however fall short of the performance that the S20 is able to achieve. 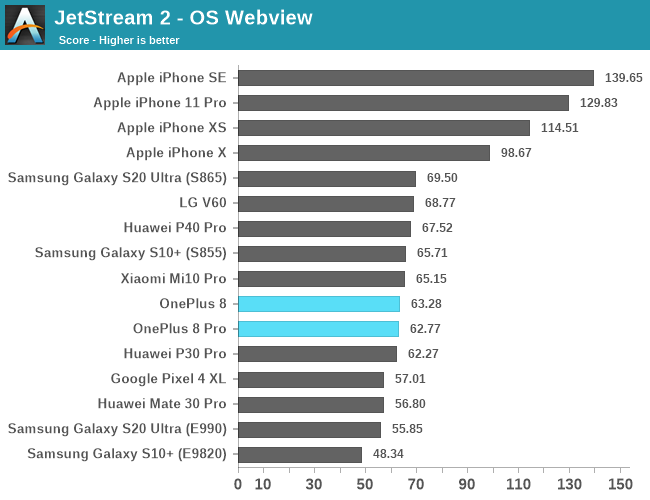 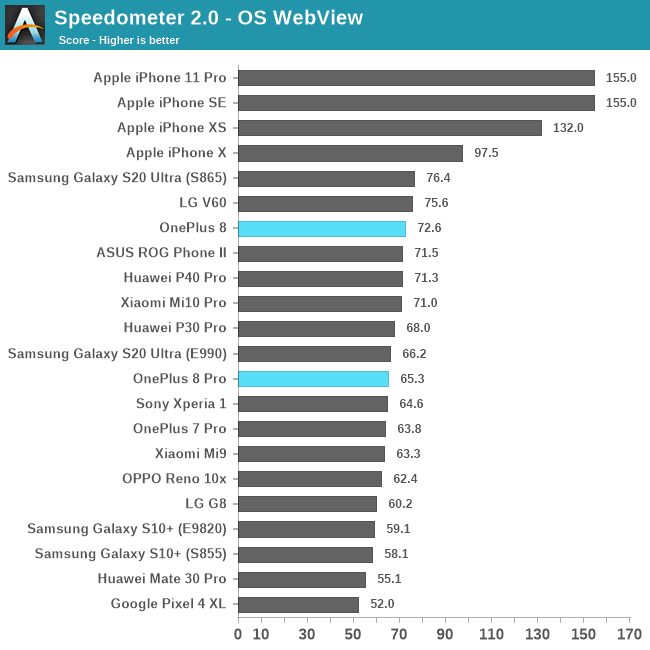 The Speedometer scores were quite odd in that I measured a bigger difference in performance between the two phones, with the regular OnePlus 8 for some reason being in the lead. I don’t have any good explanation for this other than possibly we’re seeing differences in the memory architectures of the two units and the benchmark is maybe exposing some sensitivities between the two units.

I had run my memory benchmarks on the two phones as this was the first time we’ve had access to an LPDDR4X version of the Snapdragon 865. The results were mixed – full random memory access latency was better on the LP5 system by about 5ns, but some other access patterns were slightly lower latency on the LP4 system. Sequential memory latency access in particular being oddly 10% lower latency on the LP4 system. Memory bandwidth wise, the LP5 system had a clear win with a 21% lead in memory reads at 35.71GB/s vs 29.31GB/s – however it lost on memory writes at 19.84GB/s vs 20.56GB/s in favour of the LP4 system. In actual memory copy loads it was thus also the LP4 system which had a notable lead of 12% at 10.22GB/s vs 9.09GB/s.

These are all results I hadn’t quite expected and shows that the newer memory technology doesn’t necessarily mean it’s outright better in every regard. The difference here in the Speedometer test could be very much tied to one of the memory performance characteristics of the systems

Although the OnePlus 8 phones didn’t particularly top the benchmark scores in our system tests, they still showcase outstanding experiences in the real world. The 90Hz refresh rate on the OnePlus 8 is very much noticeable and a great addition to the product, and the 120Hz scrolling experience of the OnePlus 8 Pro even exceeds it.

I tried hard to compare the OnePlus 8 Pro to Samsung’s S20 series phones, and whilst the differences were minute, Samsung’s devices did seem just a little bit snappier and that fact does materialise in our benchmark scores. It’s possible here that OnePlus opted to leave the more conservative DVFS and scheduler tuneables at the Qualcomm defaults for a more balanced battery life experience.

Still – you can’t go wrong either OnePlus phone as both are exemplary in their performance characteristics.