Every so often there comes a processor that captures the market. It ends up being that right combination of price, cores, frequency, performance, features and compatibility when added to the right sort of motherboard that makes it fly off the shelves. The main CPU this cycle seems to be the Ryzen 5 3600, offering six high-performance Zen 2 cores and 24 lanes of PCIe 4.0 for only $199. It currently sits at #1 on the Amazon best seller list, so we put one through the paces just to see if the hype was actually real.

At $199, the AMD Ryzen 5 3600 has been one the cheapest way to get ahold of AMD’s latest Zen2 microarchitecture. In our reviews of the lead generation Ryzen products, as well as Zen2 on Threadripper, Zen2 in EPYC, and Zen2 in Renoir, this microarchitecture is pushing new performance boundaries clock-for-clock against Intel’s other desktop offerings. In fact, until the latest launch of the Ryzen 3 line of processors, the Ryzen 5 was the cheapest Zen 2 processor on the market.

Just by going with these on-paper specifications, it’s not hard to see why the Ryzen 5 3600 has been so popular. Even at the $199 price point, the i5-9400F is a $182 processor with the same memory/PCIe downsides, as well as being lower in frequency, despite matching the power rating. The Ryzen 5 3600 is also an unlocked processor, for anyone that wants to overclock.

This processor matches the six cores and twelve threads, is near in price, doesn’t quite match the base frequency but does exceed in the turbo. It is 65 W, the same as AMD, and on the plus side it does have integrated graphics. But again, it is only DDR4-2666 and only has 16 PCIe 3.0 lanes, compared to AMD’s DDR4-3200 and 24 PCIe 4.0 lanes.

Not only this, but our recent trips to brick-and-mortar stores (before the lockdown) looking for Intel mid-range 9th processors have been relatively fruitless. Intel is still facing increased demand for its high-end silicon, and is still focusing on making those parts that command the highest margins, like the Xeons. We also understand that Intel might be staggering the exact release of some of this hardware, focusing on the 10th Gen K processors first, so it might be a while before we see the mid-range CPUs at retail.

This is one area where the Ryzen 5 3600 is in a bit of an awkward position, especially with the recent announcement relating to B550. 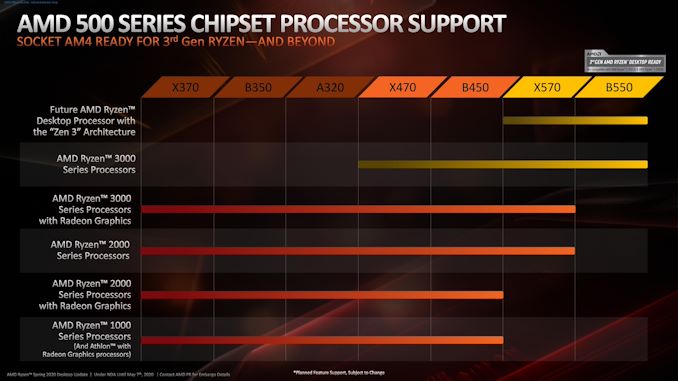 The Ryzen 5 3600 is a popular mid-range processor, meaning that it should be paired with a good mid-range motherboard. For the longest time, that was the B450 motherboard line, with an expectation of a possible upgrade to Ryzen 4000 later this year or next year. Unfortuantely AMD has stated that it will be locking the possible CPUs on B450 to Ryzen 3000 and below, meaning that the highest processor that a B450 owner can use is the Ryzen 9 3950X.

As is perhaps understandable, B450 owners with mid-range CPUs looking for an upgrade path are not too happy. With the announcement of B550 offering an upgrade path, there will be a lot of potential mid-range customers now waiting for the B550 motherboards to come to market.

For those that have some money burning a hole in the pocket, X570 is always an option, with the cheapest boards available being around $150. We have performed a large round-up of all the X570 boards in the market, with specific one-off reviews for some of the more impressive models. I suspect however that potential Ryzen 5 3600 customers might be waiting for a good $120 B550 board, should one come to market.

At the request of a number of our readers, we sourced the Ryzen 5 3600 to put it through its paces in our updated test suite. Based on the responses on social media, it looks like potential Ryzen 5 3600 customers are into gaming and/or workflow on reasonably priced systems, so we’ll tackle both areas.

In our review, there are two key comparisons to look out for:

Unfortunately we don’t have an i5-9400F for comparison, however the i5-8400 is basically the same chip by 100 MHz, with the same memory support and microarchitecture design. To make the graphs easier to understand, we've listed the results as 8400/9400. If we get a 9400 or 9400F in for testing, we will update the graphs as necessary.