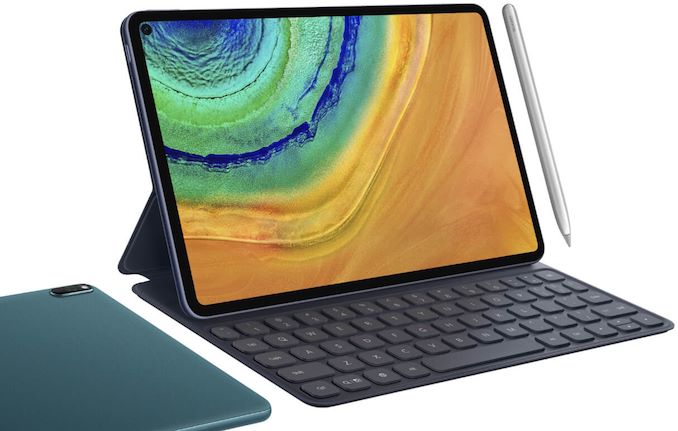 Huawei is among a few manufacturers who still competes on the market of high-end tablets against Apple and Samsung. This week the company introduced its MatePad Pro, a high-end tablet which is being positioned to rival Apple’s iPad Pro as well as Samsung’s Galaxy Tab S6. The tablet features a large display with a punch hole camera for selfies as well as Huawei’s top-of-the-line SoC.

Huawei’s MatePad Pro comes in an aluminum chassis that is 7.2 mm thick with 4.9-mm bezels, holding a 10.8-inch, 16:10 aspect ratio AMOLED display with a 2560x1600 resolution. The display has a punch hole for an 8 MP selfie camera, whereas the main camera on the backside of the tablet has a 13 MP CMOS sensor and a LED flash. The tablet is based on Huawei’s HiSilicon Kirin 990 application processor paired with 6 GB or 8 GB of RAM as well as 128 GB or 256 GB of NAND flash storage. Meanwhile, Huawei will initially offer the tablet in Wi-Fi only configurations as well as a Wi-Fi with 4G/LTE version, with a 5G model due in the first quarter of next year.

Being aimed at demanding users who are after more than a portable television, the Huawei MatePad Pro will come with the company’s M-Pen stylus for drawing and precise interaction with programs. To maximize the battery life of the device, Huawei equipped it with a 7,250 mAh battery, which in turn can be charged with Huawei’s 40 W SuperCharger or 15 W wireless charging.

On the software side of matters, Huawei’s MatePad Pro is based on Google’s Android 10 with EMUI 10, but lacks Google’s Play and Mobile Services suite, which is likely to make it considerably less competitive outside of China. The good news, at least, is that the tablet has a laptop mode, which will make it easier to use for productivity applications.

Huawei is currently taking pre-orders on its MatePad Pro in China with the aim to start actual shipments on December 12. Depending on the version, the MatePad Pro will cost from CNY 3,299 to CNY 4,499 ($392 ~ $533 without VAT). As for colors, the company will offer its premium tablet in White, Black, Green and Orange colors. Huawei yet has to formally announce the MatePad Pro outside of its home market.