At the Gamescom trade show in Cologne in Germany, ASUS has unveiled its new high-end premium HEDT motherboard, the ROG Rampage VI Extreme Encore. Built on Intel's X299 chipset and for the anticipated arrival of the their Cascade Lake-X processors, some of the main features include support for up to four PCIe 3.0 x4 M.2 drives, Wi-Fi 6 802.11ax wireless connectivity, and an Aquantia AQC107 10 G NIC.

Slotting in just below the ROG Rampage VI Extreme Omega motherboard in its current X299 product stack, ASUS has made some notable improvements to some of the core design aspects for the upcoming Intel 14 nm Cascade Lake-X processors. The extra lanes on the impending Cascade Lake-X processors have led ASUS to include four PCIe 3.0 x4 M.2 slots which feature support for VROC, meaning users can run high-performance NVMe drives in RAID for better performance and parity. Other improved aspects include a tweaked 16-phase CPU power delivery designed to optimize overclocking performance, support for up to 256 GB of DDR4-4266 memory across eight RAM slots, and dual NICs with an Aquantia AQC107 10 G NIC which has been paired up with the commonly used Intel I219-V Gigabit NIC. 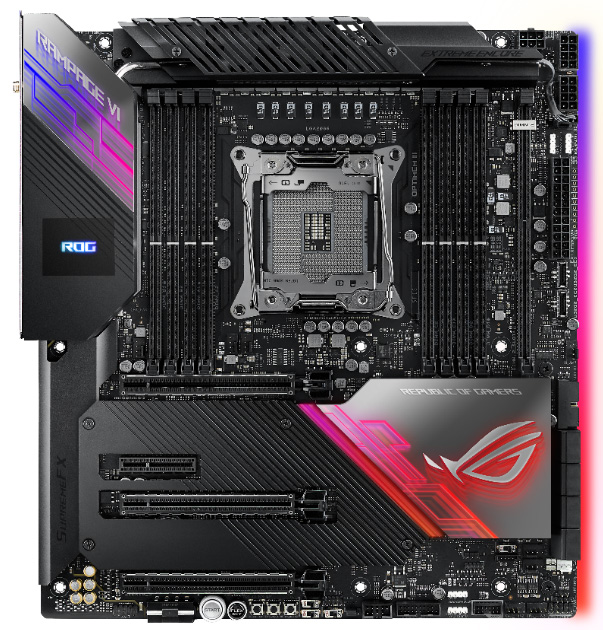 Looking at the aesthetics, ASUS has included a 1.77-inch LiveDash OLED display which can be customized with images, display POST codes and system information. There's also plenty of integrated RGB LEDs as well as additional headers so users can light their system up like a Christmas tree, or the LiveDash and LEDs can be switched off completely for a stealthier look. The ASUS ROG Rampage VI Extreme Encore features ASUS SafeSlot metal reinforcement on the four full-length PCIe 3.0 slots which operate at x16, x16/x16, x16/x16/x4 which disables the ROG DIMM.2 slot, or x16/x8/x4 with the DIMM.2 slot in use. The bottom full-length PCIe 3.0 slot is locked down to PCIe 3.0 x4.

Overclockers are also catered for with a ROG Extreme OC kit with notable inclusions such as switches for LN2 mode, slow mode, and also includes a start, reset, safe boot, and OC retry button. On the rear panel is also packed with one USB 3.1 G2 Type-A, one USB 3.1 G2 Type-C, and eight USB 3.1 G1 Type-A ports Also included is a clear CMOS button, five 3.5 mm audio jacks and S/PDIF optical output powered by a SupremeFX S1220 HD audio codec, and two Ethernet ports controlled by an Aquantia AQC107 10 G NIC, with the other port powered by an Intel I219-V Gigabit NIC. There are two antenna ports for the Intel AX200 Wi-Fi 6 802.11ax wireless interface which also offers users BT 5.0 connectivity.

The ASUS ROG Rampage VI Extreme Encore is set to cost $650 and should be available at retail in the coming months.