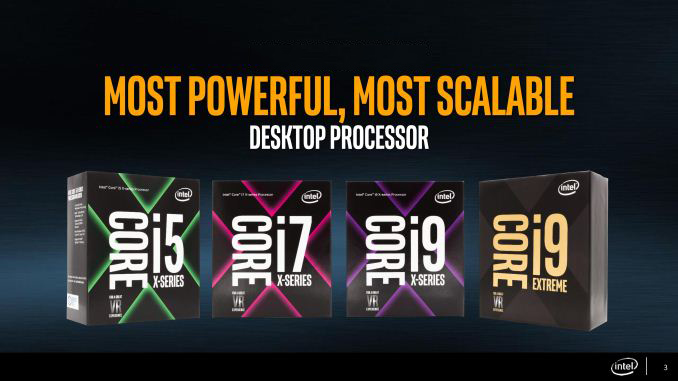 With Intel’s announcement this week that they will be releasing a new generation of Core X-series high-end desktop (HEDT) processors this fall, the company has also begun working on their plans to phase out the previous generation of HEDT processors. Revealed this week in a product change notification on Intel’s website, the company will soon be winding down production and shipment of their 7th Gen Core “Skylake-X” processors, with the final chips shipping next spring.

Intel’s Skylake-X processors first launched almost two years ago, as the Core i7/i9 7800X & 7900X series of parts. Intel’s first HEDT design based on their Skylake CPU architecture, the chips came in configurations ranging from a 6 core processor up to a might 18 core processor. However these chips were replaced as Intel’s flagship line of parts in late 2018 with the 9th Gen Core “Skylake-X Refresh” family of chips, which iterated on the design for improved clockspeeds. As a result, the original 7th Gen Core Skylake-X chips have already been on their way out, from a consumer product standpoint.

Now Intel will make that phase-out official, starting later this year. As per the PCN, Intel’s clients will need to make final orders for these CPUs by December 27, 2019. Intel, in turn, will ship their last batch of orders by June 5, 2020.

By mid-2020, Intel should already be well in the middle of shipping their future Core X-series family of parts, never mind the soon-to-be-dated 9th Gen Core parts. So this week’s note to customers is consistent with Intel’s normal production plans; the company generally prefers to only be producing a couple generations of HEDT parts at once.