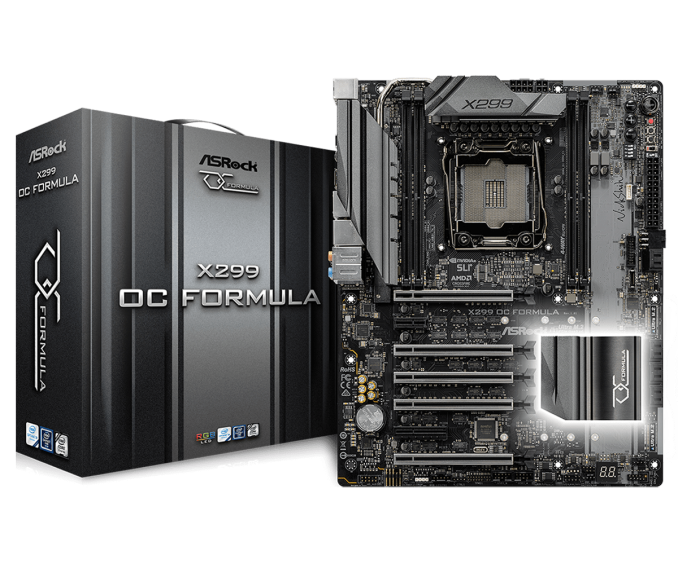 Back in May of this year, we saw our first glimpse of the X299 OC Formula, ASRock’s to-be high-end overclocking focused motherboard. In the past couple of generations, the OC Formula line was black and yellow. For X299 it has changed to black with some gray. Though it looks like most other X299 boards on the shelves, ASRock positions it as “…ideally focused on overclocking exclusively, without any other useless features, designs or gimmicks.” 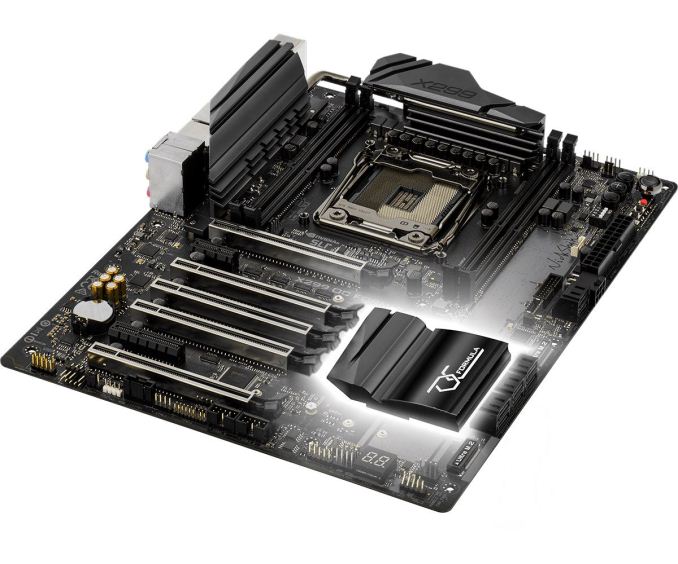 One major change to previous OC Formula (OCF) boards of the past is the reduction down to one memory slot per channel. Most X299 based boards have eight slots; while the X299 OCF has four. Since the board is aimed towards overclocking, previous boards have shown one memory slot per channel has overclocking benefits, so the transition is made on the X299 version. Most users aren’t looking for the full 128GB capacity anyway, as this can put a ceiling on how fast your ram runs. ASRock states the board design aids in stability and reaching higher memory speeds, with up to DDR4 4600 (OC) officially supported out of the box, which is among the highest we have seen so far for X299. ASRock’s own in-house overclocker Nick Shih, who has helped design the OCF line for many years, has achieved DDR4-4800 with only air cooling on some high-end premium and binned memory. The X299 OC Formula will also support soon-to-be-announced DDR4-4500 XMP profile modules that will appear on the market soon.

As with past OC Formula boards, the X299 version carries over the ASRock Formula Kits (Power Kit, Connector Kit, and Cooling Kit). The 'kits' are marketing speak for features found on the board. Items such as the all DigiPower VRM design with Dr. MOS MOSFETs, a Hi-Density power 8-pin EPS connector, 15µ gold contacts, 8-layer 2oz copper PCB and the heat pipe configuration for the large VRM heatsinks, are all part of that feature package. ASRock says this heat sink configuration can supports up to 450W from the VRMs with proper airflow. The same 13 phase VRM found on the X299 Taichi and the Gaming i9 makes its way to the OC Formula as well. 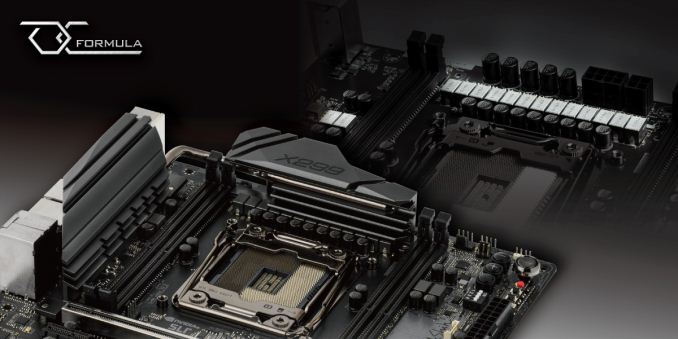 Other overclocking features include an LN2 mode switch (disables CPU thermal protection, enables additional OC features), Rapid OC buttons to manually adjust the CPU ratio, the BCLK frequency, or the CPU voltages directly on the board. There are also PCIe on/off switches to disable PCIe slots, and the retry/reset/BFG button set for quick access to different types of restarts and boots. These features are found in the upper right-hand corner of the board above the ATX power. For those not wanting to manually overclock and play, the UEFI also has several of Nick's preset overclocking profiles. These range from 4 GHz all the way to extreme overclocking (liquid nitrogen, LN2) profiles. If BCLK adjustment is needed, the X299 OCF also comes with an additional external base clock generator, the Hyper BCLK Engine III. It is designed to support PCIe frequency overclocking and a wider range of BCLK frequency adjustments. 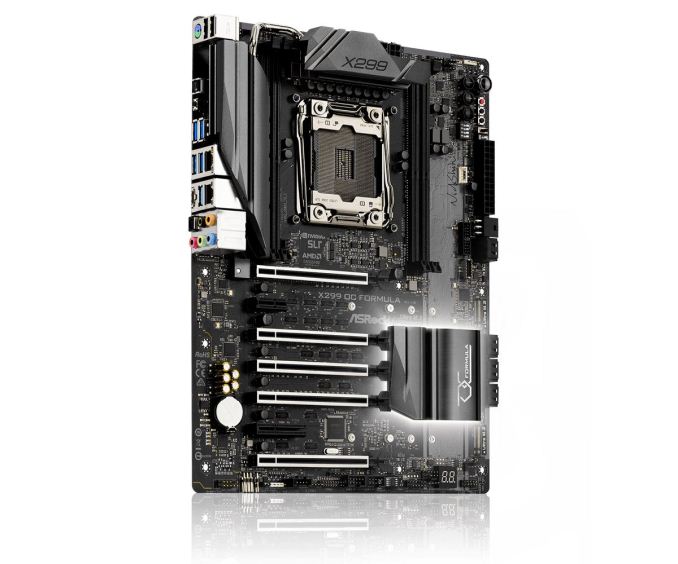 Outside of overclocking centered features, the board supports 4-Way SLI and Crossfire in its five full-length PCIe slots, has dual PCIe 3.0 x4 M.2 slots supporting both PCIe and SATA based M.2 modules, eight SATA ports, dual Intel Gigabit LAN ports, and uses the latest Realtek ALC1220 audio codec with ASRock’s Purity Sound 4 software. For those looking for RGB LEDs, the X299 OCF does have them under the PCH heatsink only.

Pricing or details on availability were not listed at the time of publication.