FLIR is making two affordable thermal imagers available for sale today. While the FLIR ONE caters to the casual users, the FLIR ONE Pro caters to power users and professionals. Thermal imagers are especially effective for diagnosing issues around the home or job site that are difficult to spot with the naked eye. Examples include spotting an overloaded circuit or identifying a switch that is beginning to fail and determining the exact location of plumbing issues like clogged pipes or water leaks (that are not readily visible). Identification of insulation issues is an oft-cited example. But, in addition, it can also be used to identify critter nesting areas, or even lost pets. A smartphone along with either the FLIR ONE or the FLIR ONE Pro can help in all these cases and more. 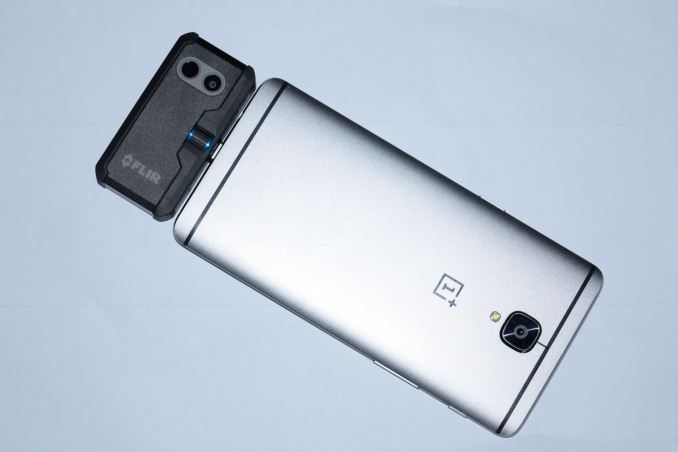 The FLIR ONE Pro hardware build quality is excellent, and there is really nothing to complain about in that aspect. The majority of the user experience falls back on the app side. The FLIR One Android app's user interface could be a bit more simple, but, considering that a professional tool needs to be able to present all the tweaks and knobs to the end-user, it makes sense. The split-up of features between the FLIR One and the FLIR Tools apps works well. We would like some features in the latter (such as the automatic recognition of the highest and lowest temperatures in the frame) to be available in the FLIR ONE's preview pane also.

FLIR requires verified online accounts for the usage of the new FLIR One app and the FLIR Tools app. However, the two accounts are distinct ones. FLIR indicated that they plan to have a single sign-on program in the future, but, consumers need separate accounts for now.

It is mandatory to be connected to the Internet when first launching the FLIR One app. Thankfully, subsequent usage doesn't require the user to be online (though the beta app that we used kept pushing a sign-in error notification even after disconnecting the FLIR ONE Pro from the smartphone). The app was also a little bit flaky - the remaining battery charge indication would occasionally show some obviously wrong values, and the UI would sometimes get garbled up. But, these issues were quite rare, and I am quite sure that FLIR will be updating the app regularly before the first set of units ship to the consumers later this month.

Moving on from the aspects that need improvement, we have to give credit to FLIR for OneFit adjustable connector feature that enables usage of the add-on module even with mobile devices enclosed in cases. The USB-C connector for the Android version solves the orientation issue that consumers faced with the previous generation FLIR ONE units. The built-in battery ensures that the add-on does not negatively affect the battery life of the mobile device. The new features of the FLIR One app are also welcome. Though I am not a big fan of the social aspects of the app (such as the community feeds etc.), I am sure some customers might appreciate the feature. The smartwatch compatibility of the app (that allows the mobile device to be placed in slightly inaccessible locations, while still being able to get a preview from the thermal imager and trigger recording on a smartwatch) is also very useful. Even though the new FLIR One app is compatible with all of the FLIR ONE units in the market, the features activated in the app are dependent on the hardware. The following table provides a detailed summary of how the app behavior varies with the device. 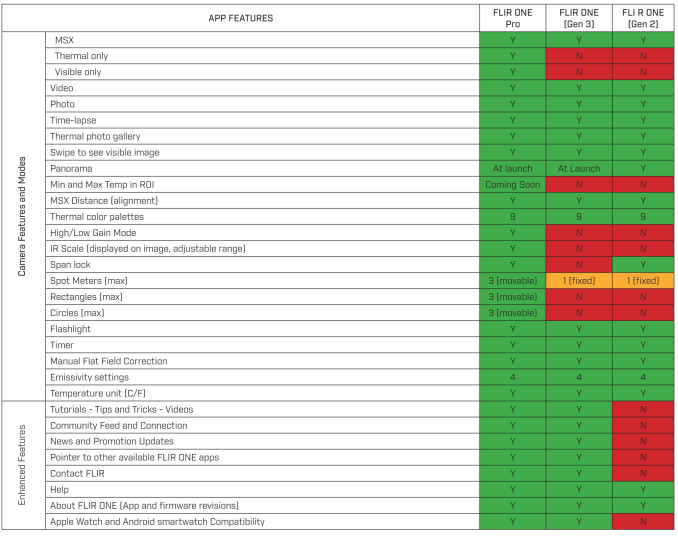 The 3rd Gen. FLIR ONE is priced at $200 (compared to the $250 launch price of the previous generation), while the FLIR ONE Pro comes in at $400. FLIR indicated that a micro-USB Android version of both devices will also become available later this summer. The closest competitor to the FLIR ONE Pro (in terms of target market and feature set) is Seek Thermal's CompactPRO. It boasts a much higher thermal sensor resolution (320 x 240) compared to the Lepton 3 (160 x 120) in the FLIR ONE Pro. However, it doesn't have a camera for the visible spectrum, and lacks the advanced blending features such as FLIR's MSX. With the Seek Thermal CompactPRO being priced close to $500, we believe that the FLIR ONE Pro has a significant edge despite sporting a sensor with just a quarter of the pixels.