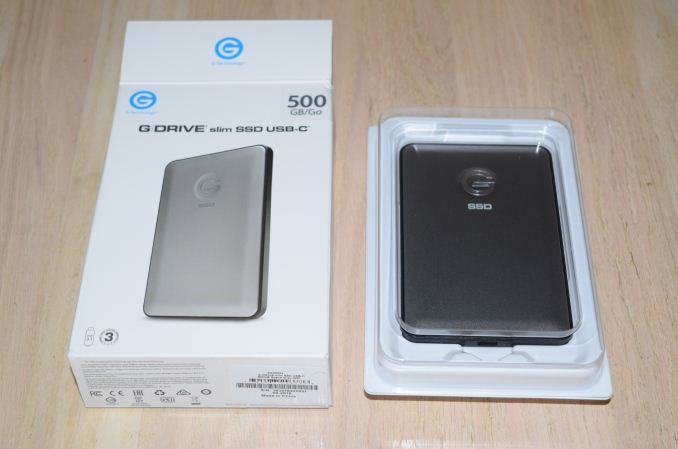 Flash-based external direct-attached storage (DAS) devices have been rapidly evolving over the last few years. The emergence of USB 3.1 Gen 2 Type-C has led to external peripherals adopting it for the host interface. DAS units are no exception, and we have seen vendors release a number of Type-C devices over the last year or so. On the storage media side, there has been a move towards cheaper flash, with TLC as the primary driver. High-performance flash-based DAS units carry a premium as they are still reliant on MLC flash for providing consistent performance.

In the last five years, Western Digital (WD) has made a string of acquisitions as part of the overall consolidation trend in the market. The two key ones have been HGST and SanDisk. Along with HGST, WD also acquired the G-Technology brand. This brand has been catering to the storage demands of content creators for multimedia acquisition, editing and distribution. Their products range from bus-powered rugged portable hard drives and SSDs to rackmount enclosures for multiple high-capacity hard drives. In the hard drive segment, G-Technology could make use of HGST products, but, for the external SSDs, they had been relying on flash from external vendors. The acquisition of SanDisk fixes this problem. G-Technology's G-DRIVE slim SSD USB-C is one of the first products to take advantage of this synergy.

The G-DRVE slim SSD USB-C is a portable USB 3.1 Gen 2 Type-C external SSD. It comes in two capacities - 500GB and 1TB. G-Technology claims speeds of up to 540 MBps, but, in keeping with the usual G-Technology marketing strategy, doesn't specify much in terms of the internals. This review analyzes the hardware and performance of the 500GB variant for typical DAS workloads

The industrial design of G-Technology products is sleek and attractive, as the primary target is content creators. A majority of those are Mac users who want their peripherals to match the look and feel of Apple hardware. The G-DRIVE slim SSD USB-C is no exception. G-Technology even advertises it as being a good companion to the MacBook. The internal drive also comes pre-formatted in HFS+ for Mac users.

The product is bus-powered. Hence, the supplied material in the package is minimal - just a couple of cables (Type-C to Type-A and Type-C to Type-C) rated for for USB 3.1 Gen 2 speeds. Other than that, we have the usual warranty papers and quick start guide. 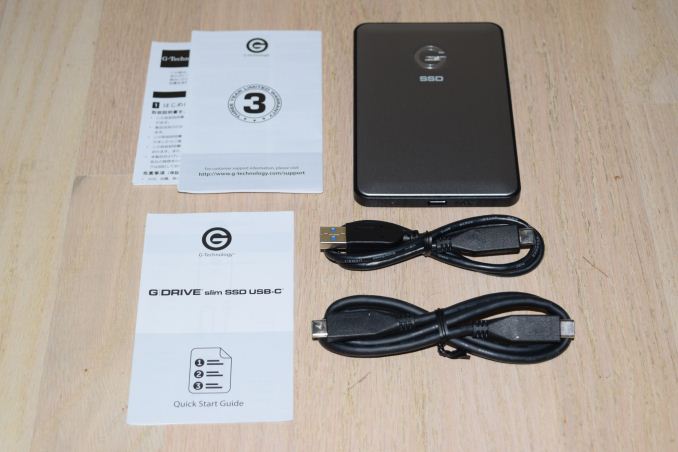 The G-Technology G-DRIVE slim SSD USB-C is based on the SanDisk X400 launched earlier this year. It is a TLC-based SSD sporting the Marvell 88SS1074 SSD controller. The first clue to this comes from the CrystalDiskInfo information. 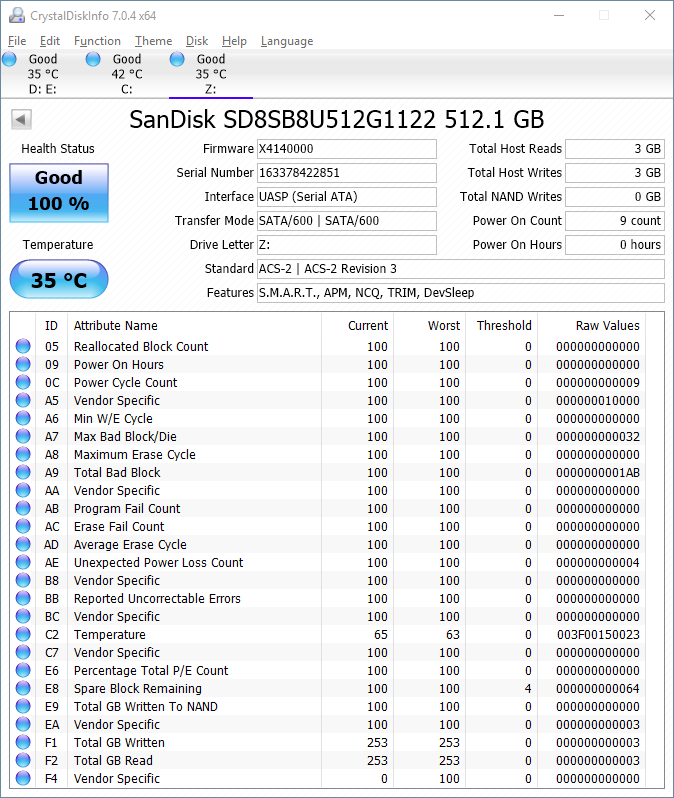 A teardown also reveals the SSD, and, as a bonus, we also see the bridge configuration.

Evaluation of DAS units on Windows is done with the testbed outlined in the table below. For devices with a USB 3.1 Gen 2 (via a Type-C interface) connections (such as the G-DRIVE slim SSD USB-C 500GB that we are considering today), we utilize the USB 3.1 Type-C port enabled by the Intel Alpine Ridge controller. It connects to the Z170 PCH via a PCIe 3.0 x4 link.

G-Technology claims speeds of up to 540 MBps, and these are backed up by the CrystalDiskMark benchmarks provided below. Unfortunately, despite being better estimate of the real-world performance compared to ATTO, it still suffers from being susceptible to SLC caching when evaluating TLC-based drives. Therefore, it is important to test out real-world scenarios also. 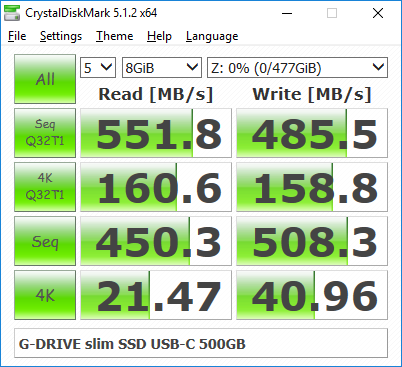 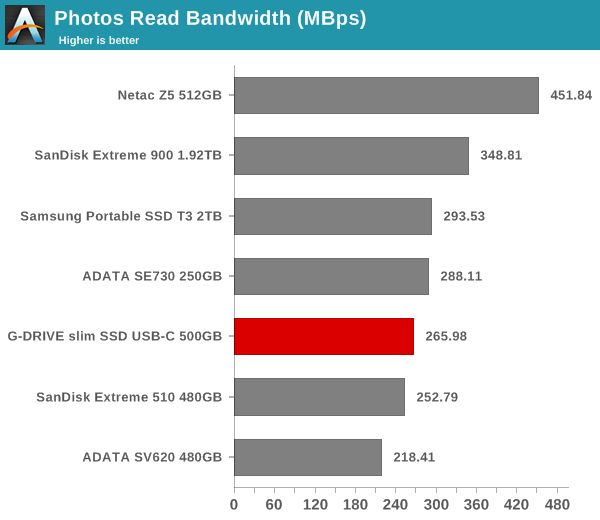 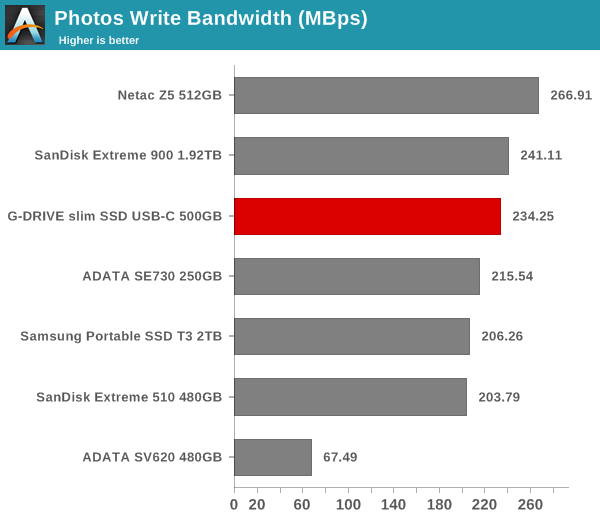 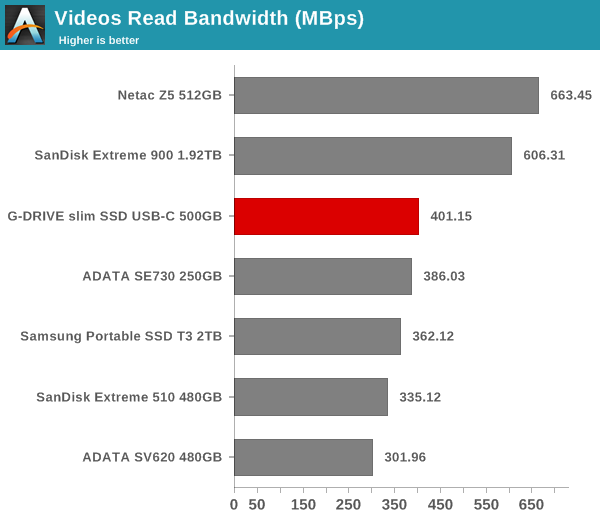 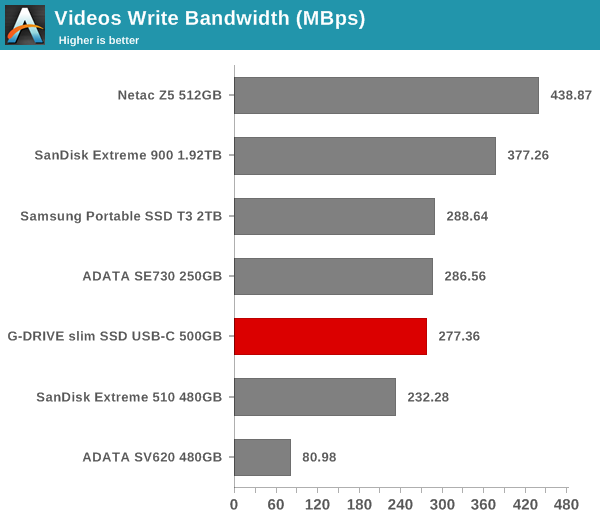 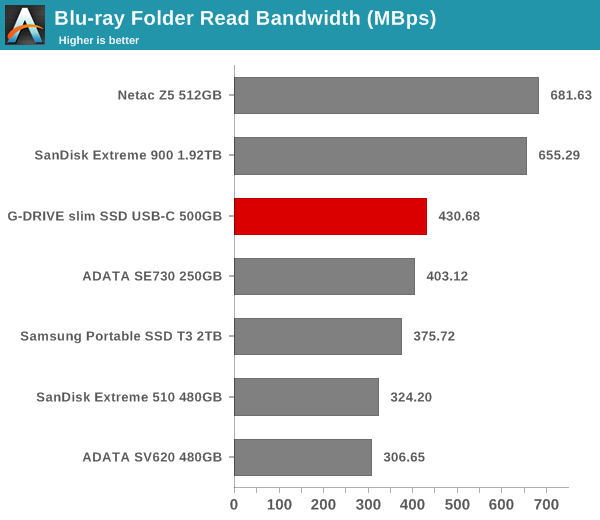 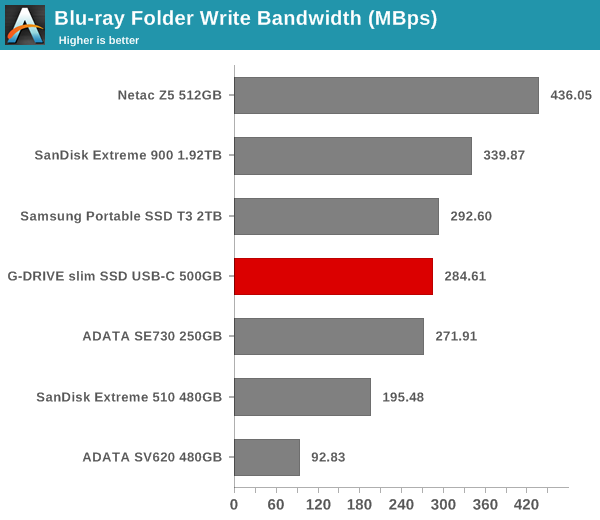 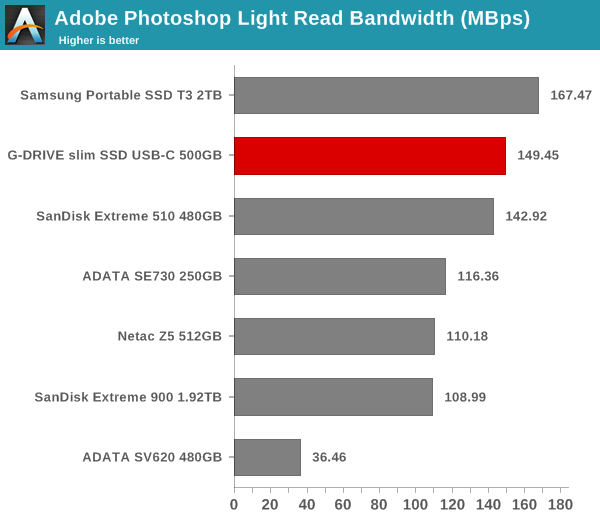 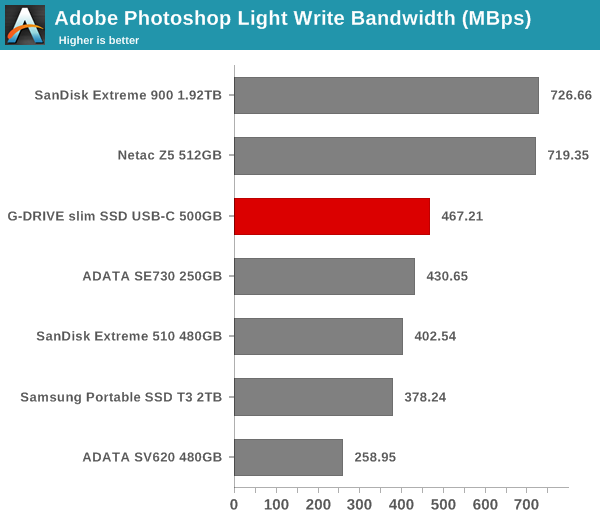 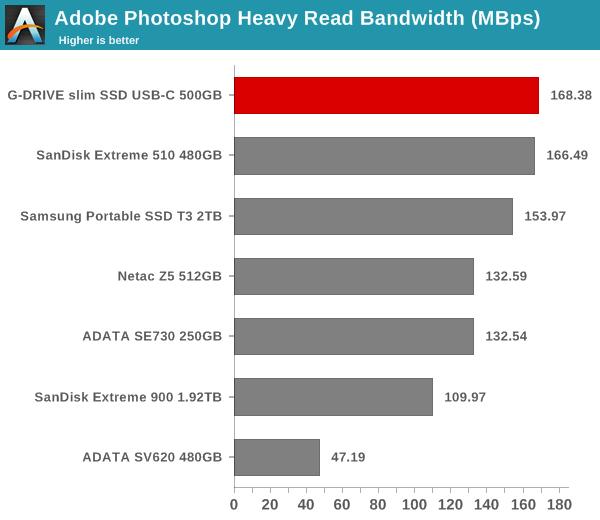 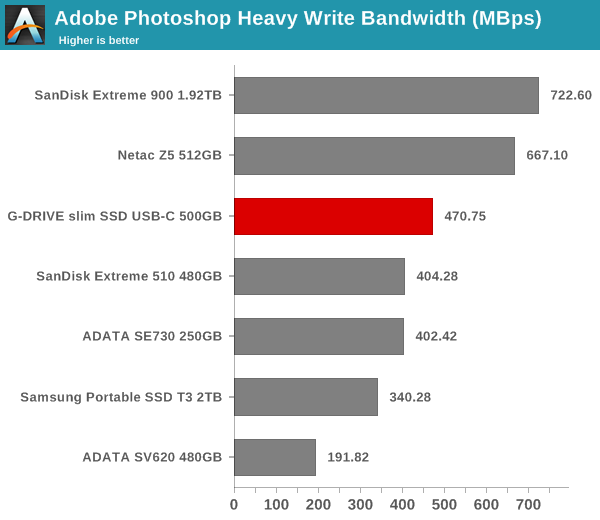 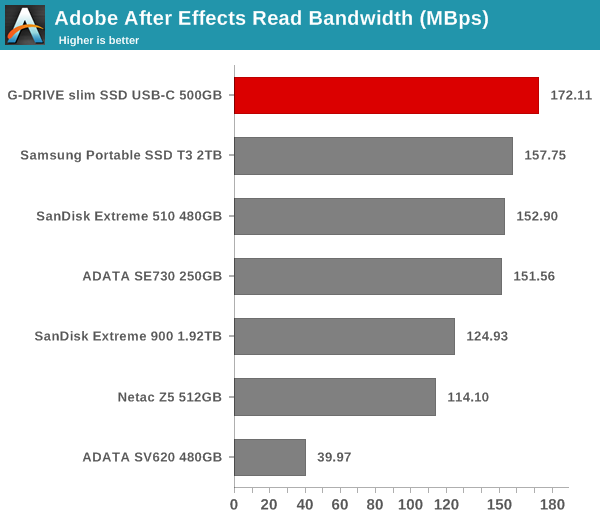 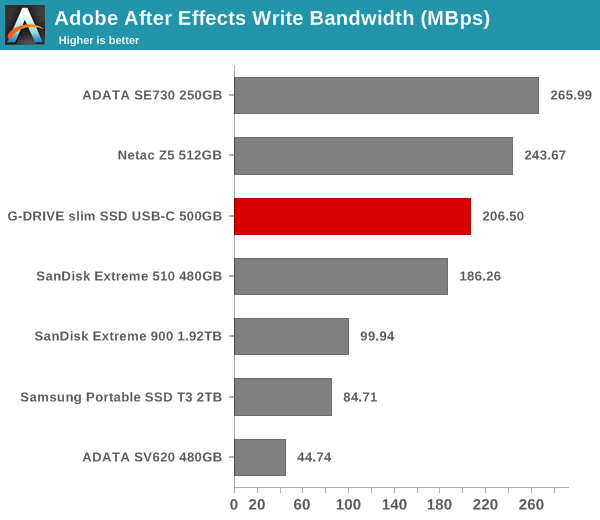 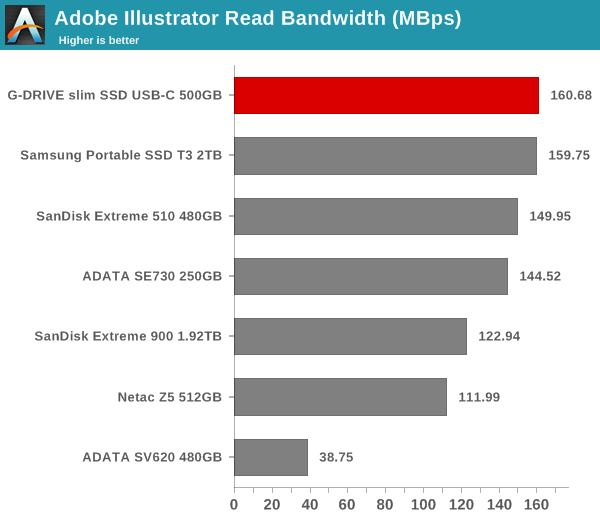 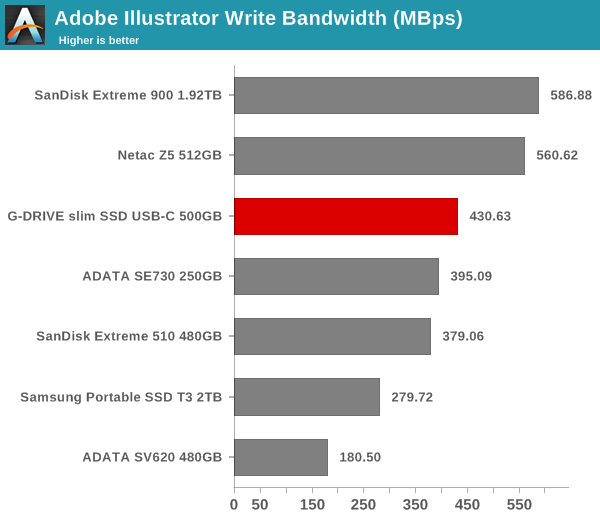 The above numbers show that SanDisk's TLC-based X400 can act as an effective external SSD, but, it still loses out to pure MLC-based SSDs and RAID-ed SSDs for workloads that put heavy stress on the SSD in terms of total traffic. That said, the USB 3.1 Gen 2 interface keeps it ahead of some of the USB 3.0 SSDs with MLC flash.

Yet another interesting aspect of these types of units is performance consistency. Aspects that may influence this include thermal throttling and firmware caps on access rates to avoid overheating or other similar scenarios. This aspect is an important one, as the last thing that users want to see when copying over, say, 100 GB of data to the flash drive, is the transfer rate going to USB 2.0 speeds. In order to identify whether the drive under test suffers from this problem, we instrumented our robocopy DAS benchmark suite to record the flash drive's read and write transfer rates while the robocopy process took place in the background. For supported drives, we also recorded the internal temperature of the drive during the process. The graphs below show the speeds observed during our real-world DAS suite processing. The first three sets of writes and reads correspond to the photos suite. A small gap (for the transfer of the videos suite from the primary drive to the RAM drive) is followed by three sets for the next data set. Another small RAM-drive transfer gap is followed by three sets for the Blu-ray folder.

An important point to note here is that each of the first three blue and green areas correspond to 15.6 GB of writes and reads respectively. Throttling, if any, is apparent within the processing of the photos suite itself. We see absolutely no issues with the thermal performance - The SSD temperature remains below 50C all through, and there is no thermal throttling at play here. 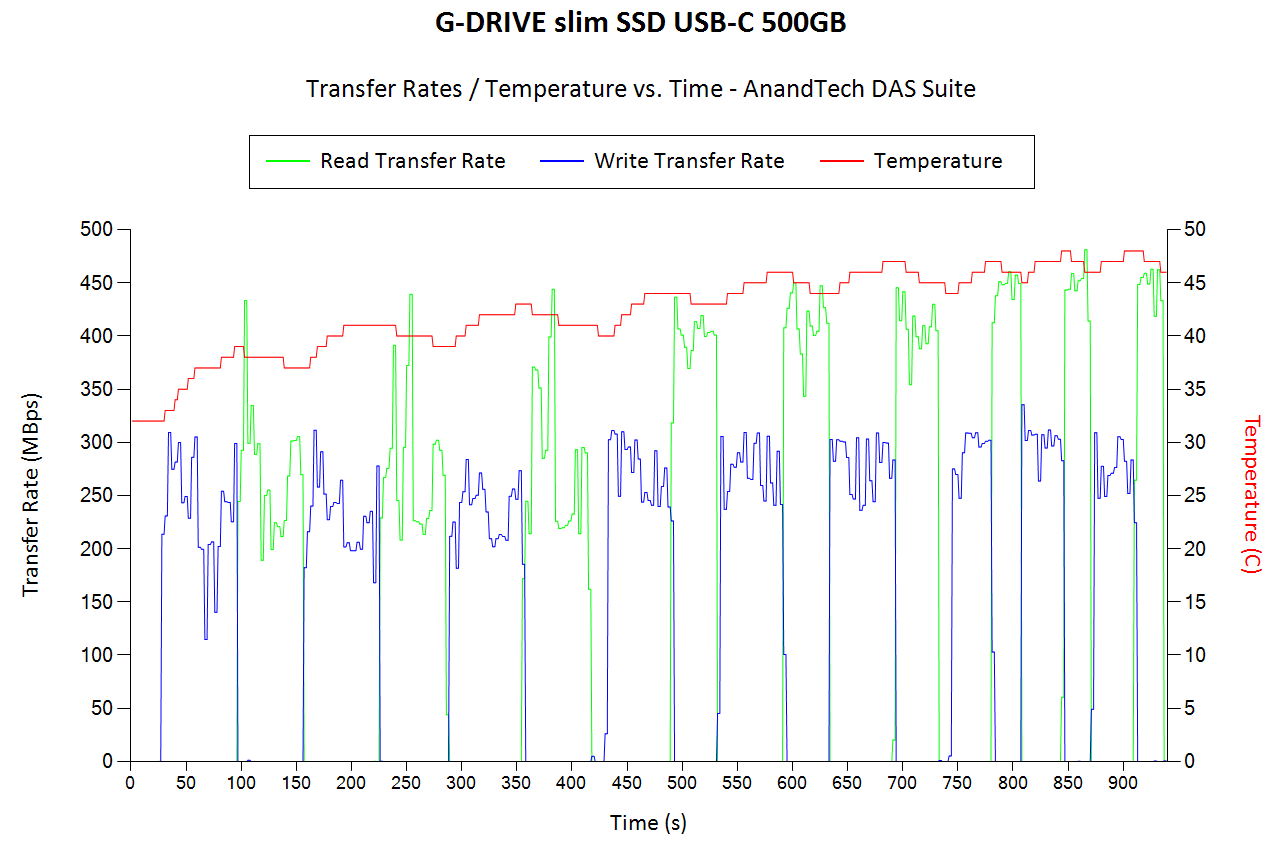 Despite the absence of thermal throttling, we see slight inconsistencies between transfers of the same set of data at different points in time. This is due to the SLC caching implementation and the overhead associated with transferring data from the SLC to TLC segments. That said, the effect is not bad enough for regular users to notice.

G-Technology's G-DRIVE slim SSD USB-C is one of the first products in the external DAS space to take advantage of the synergies existing between various companies acquired by Western Digital over the past few years. The USB 3.1 Gen 2 Type-C interface shows that this is a product that looks forward to the future, and appropriately targets people with the latest and greatest computers. Despite that, the pricing is quite reasonable and actually matches several USB flash drives in terms of price per GB. 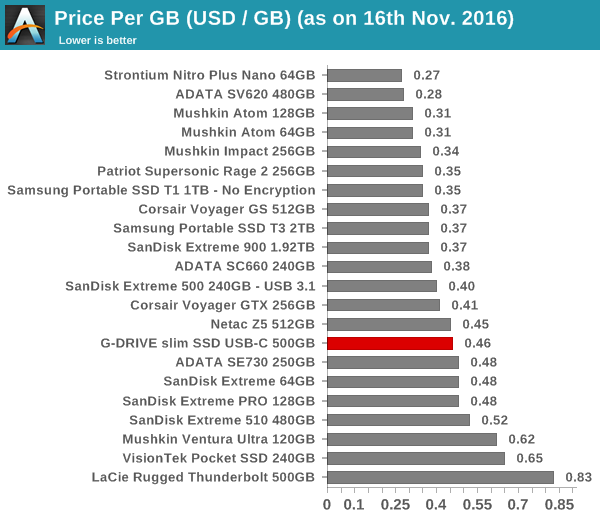 A minor point of concern is the policy of SanDisk to not implement translation of SCSI Unmap commands to TRIM in their external SSDs. We checked for TRIM support, and Windows reported an error indicating that the volume optimization operation was not supported by the hardware backing the volume. 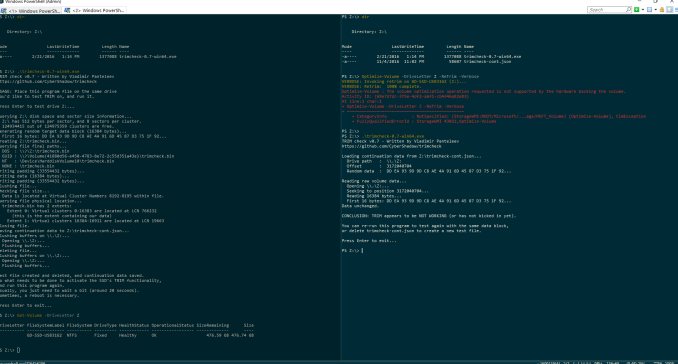 Overall, we are impressed with the performance of the G-DRIVE slim SSD USB-C 500GB version and what it delivers for $230. That said, we would prefer adoption of MLC-based SSDs in this market segment, as TLC presents both long-term performance consistency and durability concerns which get amplified for heavy direct-attached storage workloads.