My original review of the OnePlus 3 was somewhat controversial for its display section. At the time it shipped, the OnePlus 3 was set to a fixed color mode that targeted the NTSC color gamut. NTSC in this case refers to the original specification for analog color television in the United States, rather than SMPTE C which was actually more commonly targeted at the time for real equipment due to NTSC coverage not being possible on the CRT displays of the time with an adequate luminance level.

The issue with shipping a gamut other than sRGB as the only color mode on an Android phone is that Android has no color management whatsoever. This means that there's no mechanism for the operating system and its associated frameworks to understand what color space content has been created for, and what color space is used by the actual display on the phone. This means that if the display uses a different gamut than sRGB, the colors in content that targets sRGB will not be properly converted to the display's color space so they can be displayed correctly. For example, if part of an image created in sRGB had component values of RGB (255,0,0) which would make it the most saturated red possible in sRGB, the display would render it as the most saturated red possible in its native color space. This would cause distortion unless the different gamut happened to also use the same CIE XYZ tristimulus value for red.

Regardless of whether your preference is for more saturated colors, or for color accuracy, I think everyone can agree that a device should be able to display colors accurately if the user wants it to. After my review, OnePlus issued an update to all OnePlus 3 units which added an sRGB color mode for accurate color rendering. You can read my follow up piece which went over these changes, but the end result is that the OnePlus 3 went from having one of the most inaccurate smartphone displays to having one with a high degree of accuracy.

The OnePlus 3T uses the same 5.5" 1920x1080 PenTile AMOLED display as the OnePlus 3. It also includes the newest version of OxygenOS, which has made it easier for users to access the different color modes available. While the sRGB mode was originally added to the hidden developer section of the settings app, it now has its own section right in the display settings, which is a great move on OnePlus's part. With how accurate the OnePlus 3's display was, one would hope that the OnePlus 3T will be as good, if not even better. 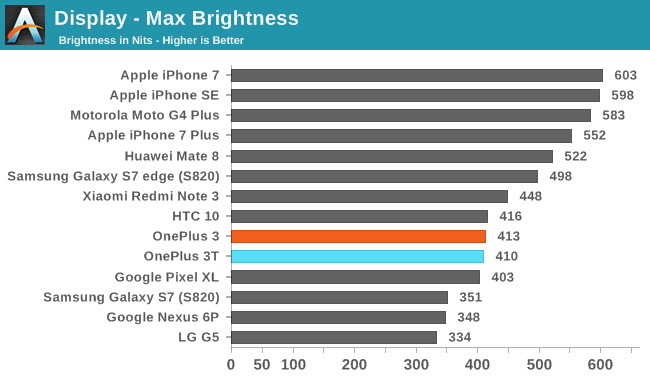 With the same panel in use, it's not surprising to see that the peak brightness level is essentially equivalent. Using an AMOLED panel means that blacks are almost perfect, leading to a near-infinite contrast ratio in an optimal setting. In practice there's obviously a degree of light from other sources which is reflected by the display, so you don't get a truly infinite contrast ratio, but the black levels are as close to perfect as one can possibly get. 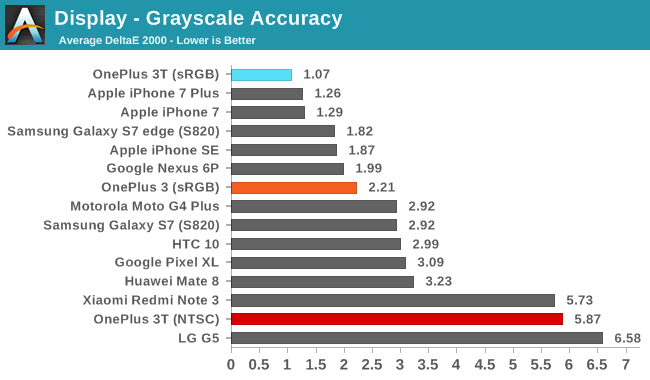 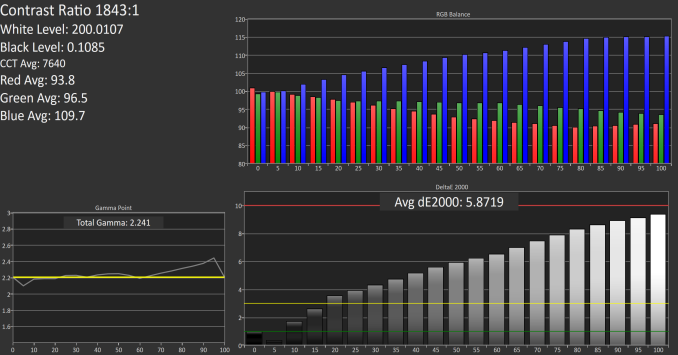 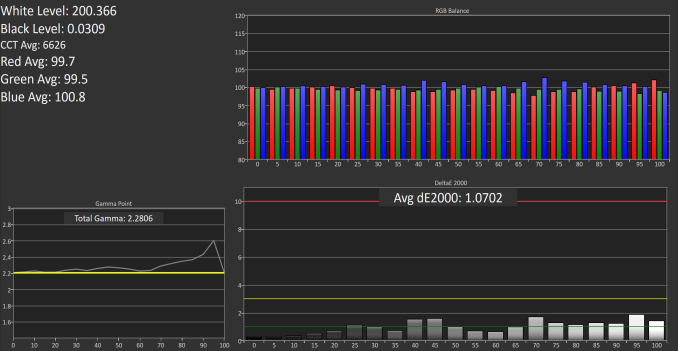 As expected, the accuracy relative to sRGB is terrible in the default mode which targets the NTSC color gamut. Meanwhile, the sRGB mode is incredibly accurate, with many colors being essentially indistinguishable from the reference shade. The OnePlus 3 already exhibited great accuracy in its sRGB mode, so seeing it pushed even further is surprising. In this case, the gamma is closer to our target of 2.2 at each shade, and the RGB balance for each shade of grey is also more uniform than the OnePlus 3. It's really impossible to say whether this is true of all units. It could be that actually shipping the sRGB mode with the phone has allowed for dedicated calibration in that mode, or this could just be an exceptionally good sample. Either way, when you consider both this and the OnePlus 3's sRGB mode, it's a safe bet that you'll be able to get great accuracy for greyscale shades on OnePlus's latest phones. 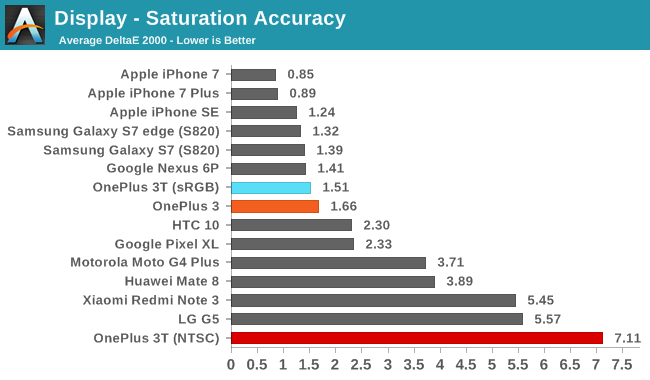 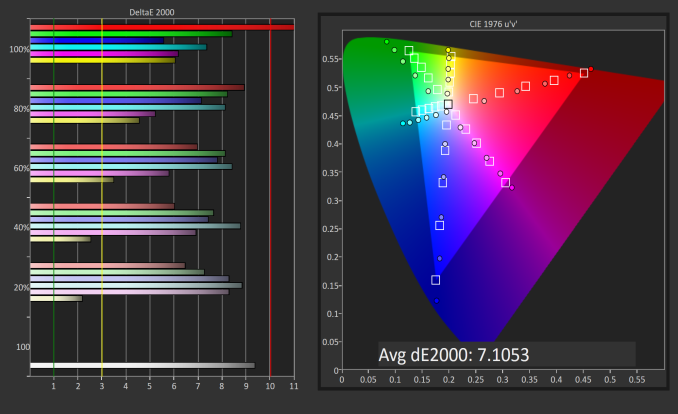 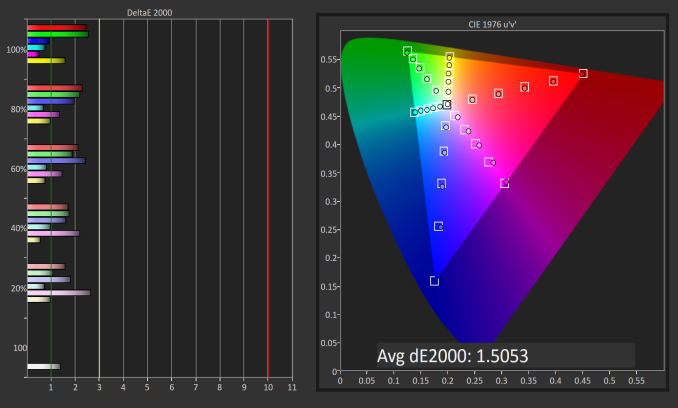 Given that the original NTSC standard is wider than sRGB, the accuracy is quite poor in the default mode. Like the greyscale test, turning on the sRGB color mode enables a level of accuracy that few other smartphones can match. Technically you can see the difference between the colors if you place them directly beside some object showing the true reference shade, but realistically even creative professionals that need a high level of color accuracy would be thrilled by a display calibrated as well as the one on the OnePlus 3T. 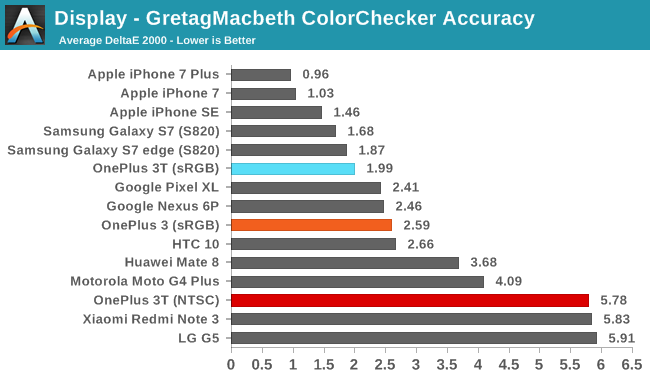 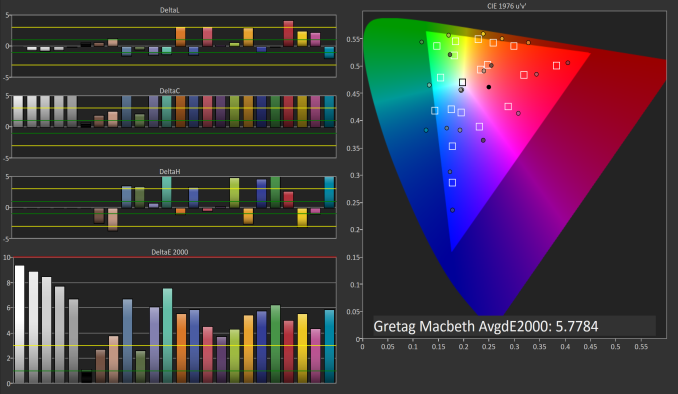 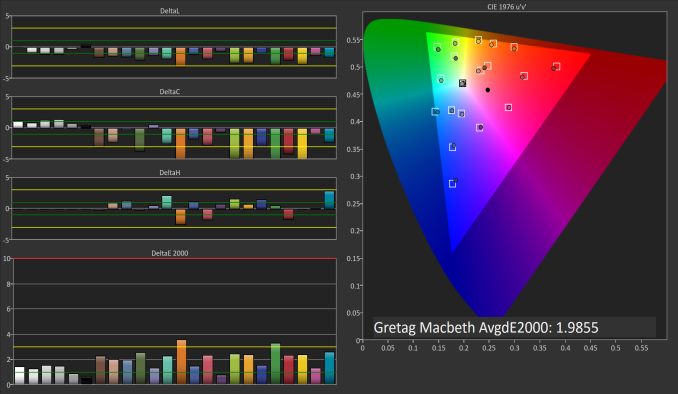 The GretagMacbeth ColorChecker test produces the same sort of result as the separate greyscale and saturation tests. This test effectively measures if both of those two tests produced good results, as to accurately render color mixtures you need to have an accurate gamma and white balance, as well as accurate primary and secondary color rendering. In the standard mode the accuracy is poor, and in the sRGB mode it's great.

As far as color accuracy goes, there's honestly nothing to complain about on the OnePlus 3T when you put it in its sRGB mode. I still disagree with the default mode being severely inaccurate and targeting a gamut that isn't used anywhere, but OnePlus has done a great job with making the settings accessible for users. They're no longer buried inside the hidden developer section of the settings app, and OnePlus has even highlighted it in their reviewers guide which indicates to me that they understand the value of giving users the choice of whatever color mode they'd like, including the option to have accurate colors for situations that demand it.

While the OnePlus 3's display is certainly outstanding as far as accuracy is concerned, I do feel that it's worth mentioning again how the sharpness of a 401ppi PenTile display is not the same as that of a 401ppi LCD display. As far as text rendering goes, the OnePlus 3 and 3T are clearly not as sharp as the OnePlus One and OnePlus 2. I would even say that text rendering is not as good as an RGB LCD in the 300-350ppi range, such as the ones Apple uses on the smaller iPhone models. This is the result of two factors, with the first being the lacking red and blue subpixels to be used in rendering what's on the screen, and the second being the actual subpixels themselves. The subpixel array is irregular due to the diamond-shaped groupings of subpixels, and the subpixels are not of a uniform shape or size either. This makes the pattern itself less suitable than an RGB display for rendering text, as you get irregular aliasing on the edges where the subpixels are not arranged in a straight line.

While I would love if OnePlus could ship a 1440p AMOLED display on the OnePlus 3T, such a panel would be too expensive to fit into the price point OnePlus is targeting. I suppose that my main disappointment is that even with the high level of accuracy on the OnePlus 3T's AMOLED display, if OnePlus were to ship the phone using the original LCD display from the OnePlus One tuned to this level of accuracy it would certainly be a better display overall. Peak brightness would be higher, text would be sharper, and you wouldn't have AMOLED's off-angle hue shift.

In the end, I still think the OnePlus 3 and 3T have very good displays, and they are greatly improved compared to the OnePlus One and OnePlus 2 in many ways. My only real complaint is that some areas have also regressed compared to the first two OnePlus phones. When you consider where OnePlus sits in the smartphone market as far as price and specs are concerned, you're still getting a great display for your money, and if you want a phone with a 5.5" 1440p AMOLED panel it's going to cost considerably more. As of right now I'm just skeptical that AMOLED is the right way to go for larger devices in the $400 range until we can get 1440p PenTile panels or 1080p RGB ones.