Patriot has introduced a new addition to the lineup of Ignite SSDs, this time with 2 TB capacity. The new drive will offer a lot of solid-state storage, but its performance will be constrained due to limitations of the SATA 6 Gb/s interface. Nonetheless, the price of the novelty promises to be relatively affordable.

When Patriot introduced its Ignite family of SSDs based on the quad-core Phison PS3110-S10 early in 2015, it aimed it at performance-mainstream systems, which is why the lineup only included models with 480 GB and 960 GB capacities. Since then, M.2 SSDs with PCIe interfaces have gained traction and many SSD suppliers had to reconsider positioning of their SATA drives. As a result, Patriot added a more affordable model with 240 GB capacity to the Ignite family later in the life cycle to address price-conscious customers. Meanwhile, the recent declines of NAND flash pricing enabled the company to build another SSD based on the S10 controller to address a new segment of buyers who require a lot of solid-state storage in a 2.5” form-factor, but not necessarily extreme transfer speeds. 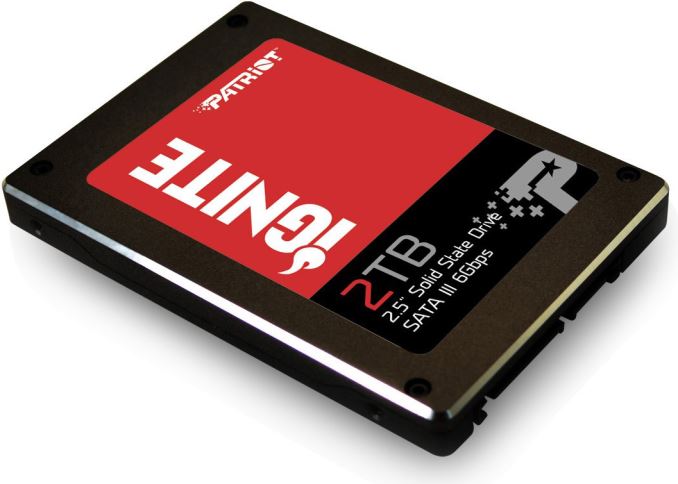 The Patriot Ignite 2 TB SSD is rated to reach sequential read speeds of up to 560 MB/s and write speeds of up to 500 MB/s, which is consistent with performance of advanced MLC-based 2.5”/SATA drives. As for random performance, the 2 TB drive delivers approximately 90K and 80K IOPS for aligned read and write operations, respectively, in-line with that of other high-capacity Patriot Ignite drives.

Phison demonstrated its reference design for 2 TB SSDs based on the S10 controller about a year ago, but its customers were unwilling to use it back then. In mid-2015 prices of NAND flash memory were considerably higher compared to today, which is why demand for high-capacity SSDs was not expected to be significant and hence it was not economically feasible to release high-capacity drives for many vendors, who do not own semiconductor fabs.

Today, prices of NAND are considerably lower. For example, the average contract price of a 128 Gb MLC NAND chip was $3.51 (the lowest contract price started at $2.8 per chip) in the second half of April, down from $5.06 in the first half of May, 2015, according to DRAMeXchange. As a result, the cost of NAND needed for a 2 TB drive is between $360 and $500, depending on the amount of memory used for overprovisioning. Therefore, it is viable for numerous SSD suppliers to offer such SSDs to end-users. Moreover, since prices of NAND keep dropping, high-capacity SSDs naturally get cheaper to make over time.

When considering costs of SSDs based on controllers from Phison, keep in mind that the company maintains strong relations with Toshiba and usually sells not just its controllers, but nearly finished SSDs with Toshiba’s NAND flash memory. Therefore, the actual cost of such package could be below the average cost of NAND flash memory obtained on the open market. On a side note, if 2 TB SSDs based on the S10 controller are now available from Phison, a number of other suppliers could also offer such drives eventually.

Patriot does not reveal retail price of its Ignite 2 TB SSD today because it only plans to sell it sometimes in Q4. Nonetheless, it should not be too high and $700 - $900 price-range seems to be more or less viable.