SATAe is not commercially available yet but ASUS sent us a pre-production unit of the SATA Express version of their Z87 Deluxe motherboard along with the necessary peripherals to test SATAe. This is actually the same motherboard as our 2014 SSD testbed but with added SATAe functionality.

Before we get into the actual tests, we would like to thank the following companies for helping us with our 2014 SSD testbed.

The ASUS Z87 Deluxe SATA Express has two SATAe ports: one routed from the Platform Controller Hub (PCH) and the other provided by an ASMedia ASM106SE chip. The ASMedia is an unreleased chip, hence there is no information to be found about it and ASUS is very tight-lipped about the whole thing. I'm guessing we are dealing with the same SATA 6Gbps design as other ASM106x chips but with added PCIe pass-through functionality to make the chip suitable for SATA Express. 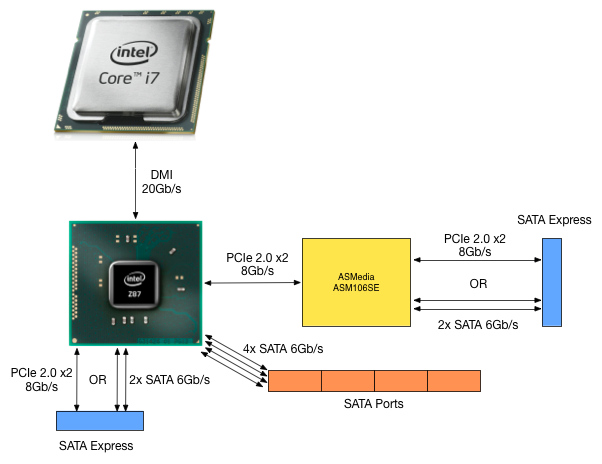 I did a quick block diagram that shows the storage side of the ASUS SATAe board we have. Basically there are four lanes in total dedicated to SATAe with support for up to two SATAe drives in addition to four SATA 6Gbps devices. Alternatively you can have up to eight SATA 6Gbps devices if neither of the SATAe ports is operating in PCIe mode. 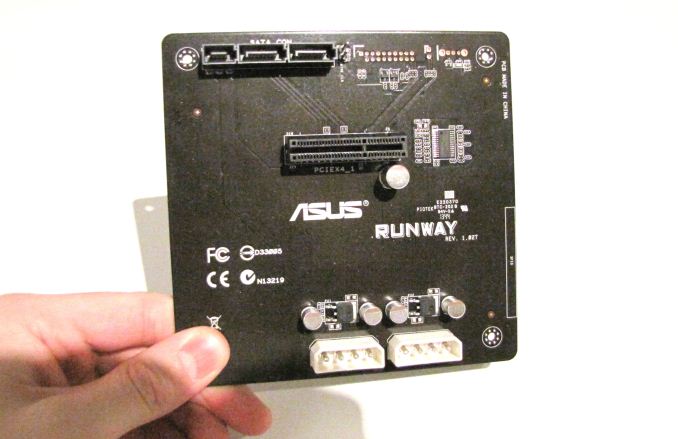 Since there are no SATAe drives available at this point, ASUS sent us a SATAe demo daughterboard along with the motherboard. The daughterboard itself is very simple: it has the same SATAe connector as found in the motherboard, two molex power inputs, a clock cable header, and a PCIe slot. 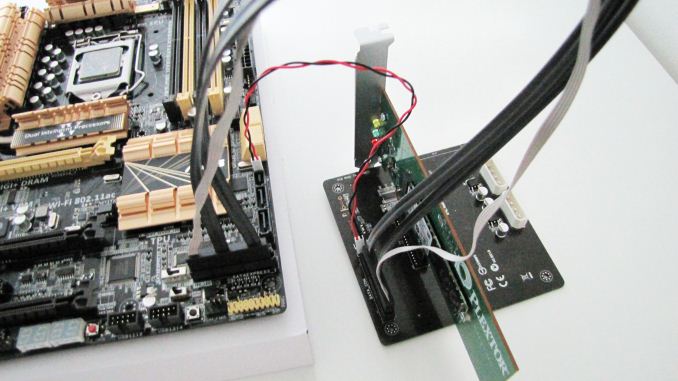 This is what the setup looks like in action (though as you can see, I took the motherboard out of the case since inside case photos didn't turn out so well with the poor camera I have). The black and red cable is the external clock cable, which is only temporary and won't be needed with a final SATAe board.

For testing I used Plextor's 256GB M6e PCIe SSD, which is a PCIe 2.0 x2 SSD with Marvell's new 88SS9183 PCIe controller. Plextor rates the M6e at up to 770MB/s read and 580MB/s write, so we should be capable of reaching the full potential of PCIe 2.0 x2. Additionally I tested the SATA 6Gbps ports with a 256GB OCZ Vertex 450. I used the same sequential 128KB Iometer tests that we use in our SSD reviews but I ramped up the queue depth to 32 to make sure we are looking at a maximum throughput situation. 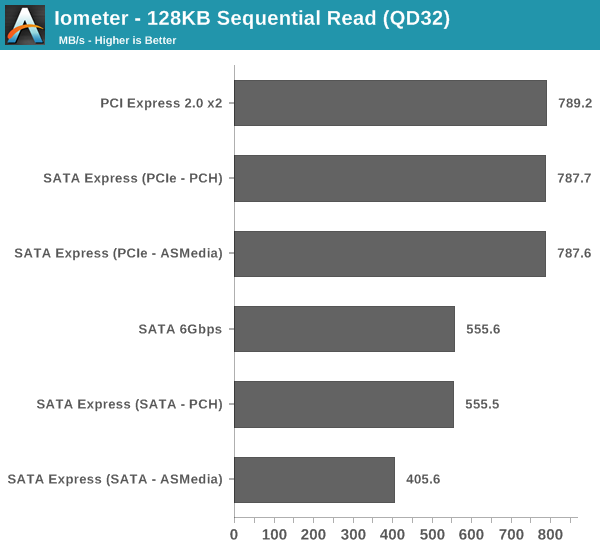 There is no practical difference between a PCIe slot on the motherboard and PCIe that is routed through SATA Express. I'm a little surprised that there is absolutely no hit in performance (other than a negligible 1.5MB/s that's basically within the margin of error) because after all we are using cabling that should add latency. It seems that SATA-IO has been able to make the cabling efficient enough to transmit PCIe without additional overhead.

As for SATA 6Gbps, the performance is the same as well, which isn't surprising since only the connector is slightly different while electrically everything is the same. With the ASMedia chipset there is ~25-27% reduction in performance but that is inline with the previous ASMedia SATA 6Gbps chipsets I've seen. As I mentioned earlier, I doubt that the ASM106SE brings anything new to the SATA side of the controller and that's why I wasn't expecting more than 400MB/s. Generally you'll only get full SATA bandwidth from an Intel chipset or a higher-end SATA/RAID card. 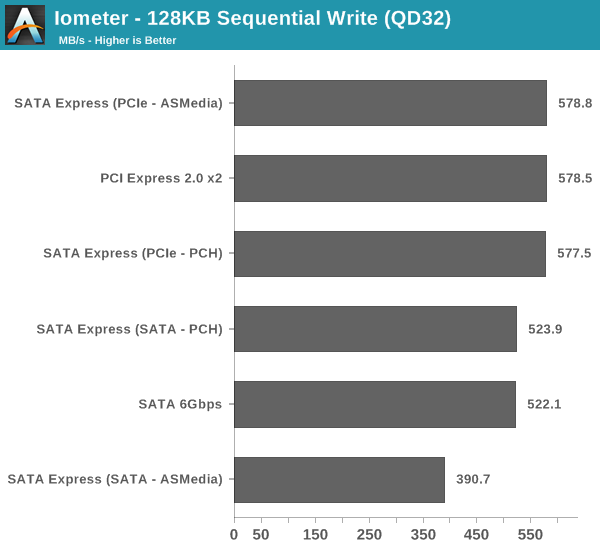 The same goes for write performance. The only case where you are going to see a difference is if you connect to the ASMedia SATA 6Gbps port. I did run some additional benchmarks (like our performance consistency test) to see if a different workload would yield different results but all my tests showed that SATAe in PCIe mode is as fast as a real PCIe slot, so I'm not going to post a bunch additional graphs showing that the two are equivalent.