It's a move that the team from Cupertino has been using for the last several years, and it looks like Microsoft is going to give it a shot. In a post on The Windows Blog (not to be confused with the Building Windows 8 blog), Brandon LeBlanc announces that Microsoft will be doing a Windows 8 upgrade promotion, where upgrades from Windows XP, Vista and 7 to Windows 8 Pro will cost just $39.99.

This reflects a similar move Microsoft made in 2009, where they offered Windows 7 pre-orders at a significant discount.  At the time those upgrades were $50 for Home Premium, $100 for Pro, and $150 for the Home Premium Family pack (3 licenses), meaning Windows 8 pre-order upgrade pricing is significantly better than Windows 7 pre-order upgrade pricing, with Windows 8 Pro going for less than half the price of its predecessor. And while there isn’t a family pack (so far), 3 Pro licenses are still cheaper than the Windows 7 family pack. The catch of course is that just like last time this is a limited time offer; while Microsoft is running this promotion for far longer than the 2 weeks Windows 7's promotion ran for, this one is only going until January 31, 2013. 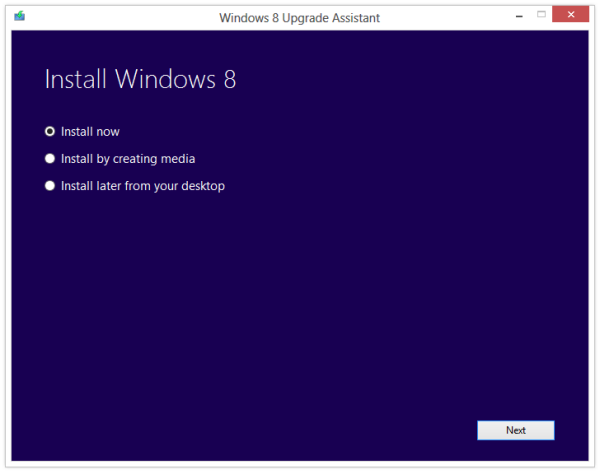 Microsoft has also offered a few technical details on the upgrade process. Microsoft will be selling upgrades both in physical packages and digitally from their store, with the latter being the cheaper price. For electronic copies the upgrade process will be done through the use of the Windows 8 Upgrade Assistant, an installation app that streamlines the download and allows users to customize what they want to retain from their earlier installation. HTPC users will also want to take note that because this upgrade path leads to Windows 8 Pro, and as part of the promotion buyers will have access to Windows Media Center as a free downloadable feature; this allays concerns from the HTPC community that they would need to upgrade to a significantly more expensive version of Windows 7 Pro to access the feature.

On that note, for those of you still on Windows XP, the fact that Microsoft is offering Windows 8 Pro as opposed to Windows 8 (consumer) should be of particular interest. Windows 8 Pro comes with downgrade rights, which allow the owner to legally install older versions of Windows. So for those of you needing to upgrade from XP but still wanting to hang back with Windows 7, this is a de-facto $40 Windows 7 Professional upgrade too.

Now there's no obvious reason why they've made this pricing move. Perhaps it's a move to quell the outcry from users dissatisfied with the UI changes. Perhaps it's a change in pricing philosophy that treats delta updates as lower cost than a complete license; and if that's the case, could we see annual $40 upgrades a la OS X? What is certain, is that once you make this move, it's difficult to move back to a model where loyal customers have to shell out $150 to use your latest software. With any luck, this new frugalness will reach their other high cost moneymaker: Office.