The Core 100 HT-BD comes in a small package, and at first you wonder how such a powerful unit could come in such a small size. 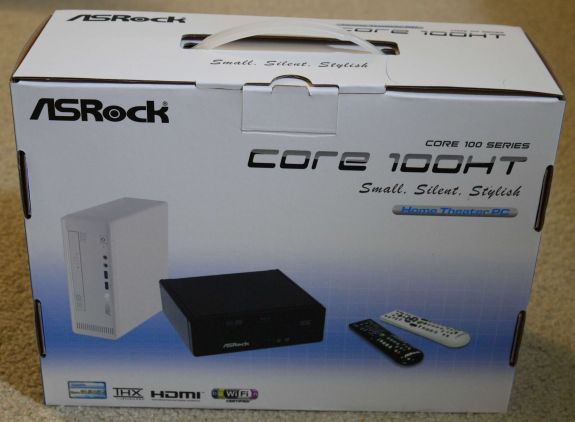 Apart from the main unit, the package also bundles the following:

1. 90W AC / DC Adapter
2. SATA and power cables, as well as mounting screws for an optional second 2.5" hard disk
3. HDMI to DVI adapter
4. MCE remote and batteries.
5. Manual with instructions for disassembling and mounting the optional disk drive
6. Anti-slip pad for the base of the unit
7. CD with drivers and ASRock utilities 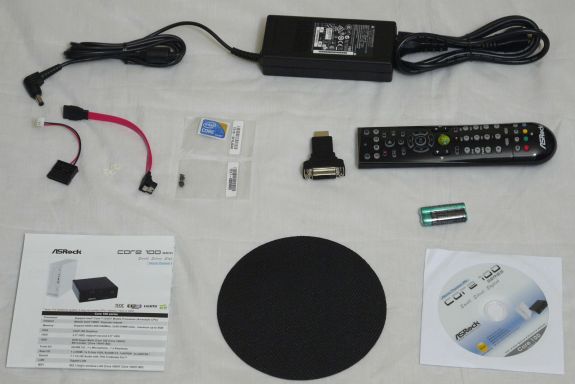 The appearance and dimensions of the unit are very similar to that of the ION 330-HT that was reviewed last August. The build quality of the chassis is top notch, and the unit will have no problem in blending with the A/V equipment of most consumers. However, the abrupt edges of the unit will not sit well with those interested more in the aesthetics and appearance rather than the internal capabilities of the unit. In the next iteration of the product, ASRock will probably work on the industrial design a bit more. Replacing the slimline Blu-Ray drive with a slot-loading type drive would also improve the appearance. These types of changes would enable them to cater to the segment of consumers who go more by the looks also. 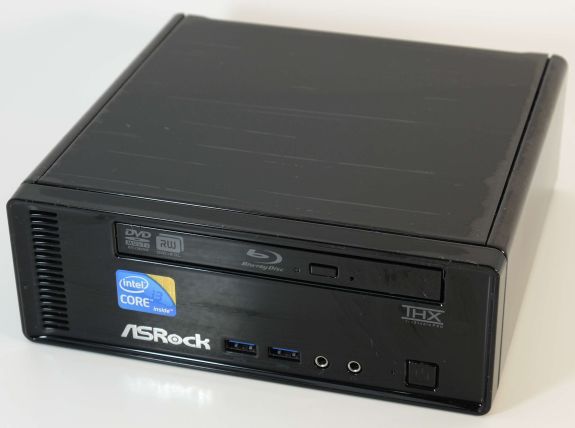 We had mentioned in the ION 330 review about the absence of ports on the front panel being a bit strange, and ASRock has duly taken note, putting two USB 3.0 ports on the front panel. In addition, we also have headphone and microphone jacks in front. A set of vents on the left of the front panel helps in cooling the unit by maintaining air circulation. The slimline Blu-Ray drive is the same as those which make an appearance in various notebooks. The cost of such drives has come down drastically in the last 1 year, and we don't expect this component to add on too much cost over the DVD drive only version. Notably absent in the ION 330, but making an appearance in this unit is the THX logo above the power button to the right of the front panel.


ASRock uses the two sides of the unit as antennae for the Atheros WiFi module. Moving on to the rear of the unit, we find the adapter power input, followed by the audio ports. Analog audio output can be connected directly to the speakers, or the optical SPDIF output can be used to connect to older A/V receivers. Following this is the Gigabit Ethernet port, and 6 USB 2.0 slots. Further to the right, we have the VGA output (we really needed a DVI here), beneath which one gets the eSATA slot and HDMI output port. Wrapping up this panel is the ventilation fan. Our only gripe with the back panel is the placement of the eSATA port, which makes it difficult to connect external hard disks, particularly when the VGA port is being used. 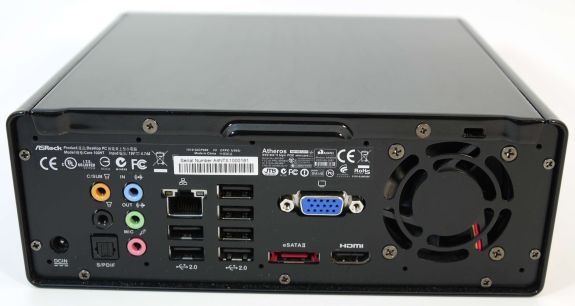 Just like a notebook, this unit also supports simultaneous display on two monitors. Testing was done mostly with the HDMI output connected to a Toshiba REGZA 37" 1080p TV through an Onkyo TX-SR 606, and the VGA port connected to a old Dell monitor running at 1280x1024. It must be noted that the HDMI port on the unit is only 1.3a. This makes it impossible for the unit to drive monitors with resolutions higher than 1920x1080. Even extremely affordable 2048x1152 monitors such as this one from Dell are left unsupported at their maximum resolutions. However, we expect that this will not be a concern to buyers, since the unit will probably end up getting connected to a 1080p TV in most scenarios.

The Core 100 HT-BD ships with no OS installed. For the purpose of this review, we loaded up a copy of Windows 7 Ultimate x64. It is also possible to install Ubuntu or any other Linux distribution and still be able to take advantage of most of the HTPC functions of the system. Our analysis in the rest of the article, however, is completely from the Windows 7 standpoint.

Starting with this piece, all our media streamer and HTPC reviews will carry a table summarizing the data and A/V connectivity options for the unit from a home theater perspective. We will conclude this section with the same.