DDR2 is a subject whose time has come, but whose interest is lagging behind. In a few months everyone will be asking what memory they should use with AM2 or Conroe, but for now everyone seems to be like a deer caught in headlights waiting for what will happen. One thing IS certain in today's climate and that is your next memory purchase will be DDR2. Whether AMD or Conroe you should be looking for the fastest and lowest latency DDR2 memory you can find.

The problem, of course, is the lingering perception that DDR2 memory means high latency. That certainly appeared the case when DDR2 was first introduced, but DDR2 development continues. One of the first real DDR2 stars was Micron D fat body chips, which seemed to be used in every early DDR2 memory once memory companies realized how good they were. In a day where DDR2-400 was 1:1, the Micron DDR2 chips could be pushed all the way to DDR2-800 and beyond - and they could reach these speeds at the fastest timings (the lowest latencies) you could find in the market.

A few Intel enthusiasts paid a lot of attention to the Micron fat body D chips, but the rest of the enthusiast world was running in droves to the AMD platform which used older DDR memory instead. As a result Micron fat body D chips were only being talked about by a few die-hard Intel enthusiasts. Then Micron did what they have done many times before with some of their great enthusiast parts. They discontinued fat-body D chips, claiming yields (translate to profits) were not good enough to continue making what were clearly the best DDR2 chips on the market.

Since that time, nothing has really come along that is quite as good as the discontinued Micron fat-body D chips. Progress has been made by several memory manufacturers, and the current darling of DDR2 chips is made by Elpida. 2GB kits (2x1GB DIMMs) based on Elpida chips perform nearly as well as the legendary Micron chips. You can clearly see this typically excellent Elpida DDR2 performance in our recent review, Mushkin XP2 PC2-5300 DDR2 - Xtreme Performance Memory.

The computer enthusiast world is now looking for even more in DDR2 memory. With AM2 expected in June/July, potential buyers are talking about the possible impact of very low DDR2 latencies with the on-chip memory controller that will be featured in the new AM2 processor. With Conroe looking to regain the performance crown, potential buyers are also realizing that without the deep pipes of Intel NetBurst, not only will performance improve, but low DDR2 memory latencies might finally make a performance difference on the Intel platform. The new mantra for DDR2 memory has become low latency, but it is important to understand what that means.

It is too much for this review to look deeply at the DDR2 architecture, but it is important to understand that CAS latency does not work the same way in DDR2 as we have seen in DDR memory. As a result CAS 2 is not even an option in current DDR2 controllers, with CAS 3 a very fast option for DDR2 memory. We have all learned in DDR that the best tRAS performance is NOT normally the fastest tRAS setting, but one that is balanced to the chipset/memory controller architecture. This lesson also carries over to DDR2, with the result that best performance often comes with higher tRAS settings.

All of this leads to the quesion of what are the fastest DDR2 memory timings you can possibly find today in DDR2 memory? The answer is CAS 3, with a current range of CAS 3 to 6, RAS Precharge of 2, with a range from 2 to 6, RAS to CAS Delay of 2 with a range of 2 to 6, and tRAS (RAS Activate to Charge) dependant on chipset/memory controller with a broad range from 4 to 18 in some BIOS. tRAS settings are generally higher in DDR2, with best performance settings commonly in the 9 to 15 range. All of this translates into the lowest latency memory you can conceive today having timings of 3-2-2-9.

With 3-2-2 as the DDR2 Holy Grail, you have a clear idea of the expectations for any new DDR2 memory. There has been huge speculation that Micron's newest memory chips might be this new DDR2 "standard bearer", and it seems it has taken a very long time for Micron to finally deliver these new chips. The first memory we have received with the new Micron DDR2 chips is OCZ EL PC2-8000 XTC. 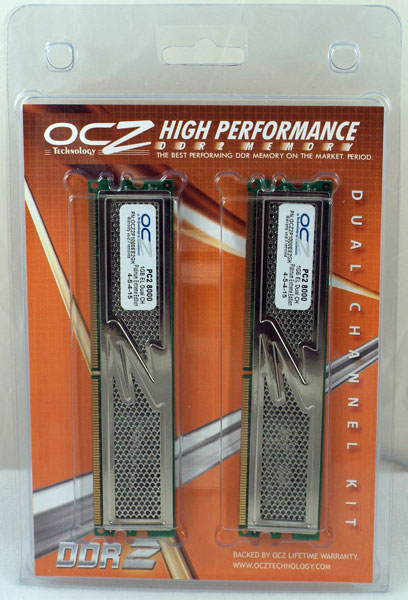 The OCZ PC2-8000 features the new Micron memory chips, and as you can see from the package it also is a featured member of the Platinum series with the latest "mirrored" XTC perforated heatsinks, and the EL (Enhanced Latency) technology introduced by OCZ. The real question is whether the new Micron chips and the other nice OCZ features translate into groundbreaking DDR2 performance. Is this a memory you would proudly pair with a new AM2 or Conroe processor?