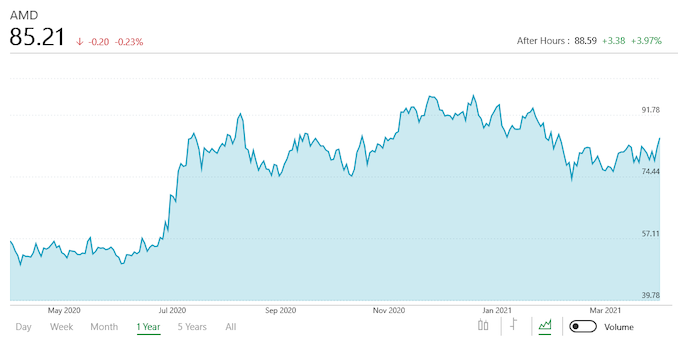 As Q1 earnings season continues to roll along, on deck today is AMD, who is getting the privilege of reporting some very positive earnings for the first three months of 2021. Firing on all cylinders – CPU, GPU, and semi-custom – AMD’s numerous product launches over the last several months are now paying major dividends for the company, as everything AMD is in high demand. And indeed, AMD is the poster child for the current chip crunch, as the company is making everything it can and even after selling over 3.4 billion dollars’ worth of chips in Q1, it’s still not enough.

For the first quarter of 2021, AMD reported $3.45B in revenue, making for another staggering jump over a year-ago quarter for AMD, when the company made just $1.79B in what was their best first quarter in a decade. For 2021 it’s now all about setting (and beating) records for the company, as evidenced by the 93% leap in year-over-year revenue.

AMD’s big run-up in revenue is also reflected in the company’s other metrics; along with that revenue AMD’s net income has grown by 243% year-over-year, now reaching $555M. And if not for an unusual, one-off tax benefit for AMD last quarter, Q1’21 would be AMD’s most profitable quarter ever – and indeed is on a non-GAAP basis. Meanwhile AMD’s gross margin is holding at 46%, steady versus Q4 and up one percentage point versus the year-ago quarter.

One more the flag bearer for AMD is their Computing and Graphics segment, which encompasses their desktop and notebook CPU sales, as well as their GPU sales. That division booked $2.1B in revenue for the quarter, $662M (46%) more than Q1 2020. Accordingly, the segment’s operating income is (once more) up significantly as well, going from $262M a year ago to $485M this year.

As always, AMD doesn’t provide a detailed breakout of information from this segment, but they have provided some selective information on revenue and average selling prices (ASPs). Overall, client CPU sales were quite strong; according to AMD Ryzen processor sales are up overall, as are ASPs, on both a quarterly and yearly basis. The big wins appear to be coming from premium devices such as ultra-thin laptops and gaming devices, especially as notebook revenue is up once again, setting a sixth consecutive record for AMD. On which note, according to AMD their Ryzen 5000 mobile (Cezanne) revenue has ramped up twice as fast as the mobile 4000 series (Renoir), underscoring AMD’s continuing push into mobile. 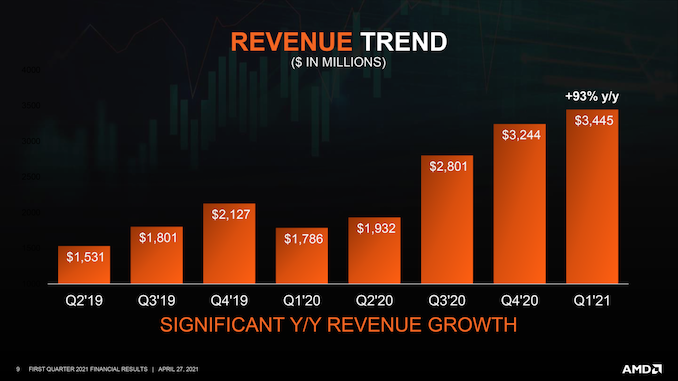 Meanwhile the company is reporting similarly good news from their GPU business. Sales and ASPs are up due to the launch and ongoing sales of various Radeon RX 6000 products. Overall, AMD’s Radeon RX 6000 revenue has more than doubled versus Q4, as the company scrambles to make as many GPUs as it can in a very GPU-starved market.

Meanwhile AMD’s Enterprise, Embedded, and Semi-Custom segment has seen an explosion of growth of its own over the past year, thanks to the launch of AMD’s third-gen EPYC (Milan) processors, as well as the 9th generation consoles. This segment of the company booked $1.35B in revenue, $997M (286%) more than what they pulled in for Q1’20. It’s such a strong performance that it’s even up on a quarterly basis, more than offsetting the usual seasonal decline in semi-custom sales that occurs in Q1.

The big jump in revenue also means that the segment is well into the black on an operating income basis, a major improvement over Q1’20 where AMD lost money on the segment. $277M on $1345M in revenue is not quite as strong as what AMD’s computing segment pulls off, but this is a long-standing artifact of bundling AMD’s low-margin semi-custom business with its high-margin (and ever increasing) enterprise CPU business.

On a side note, if there’s any single metric in AMD’s latest earnings announcement that underscores just how much things have turned around for a company that nearly went bankrupt half a decade ago, it’s the company’s cash balance: AMD is sitting on $3.1B in cash, cash equivalents and short-term investments. Conversely, long-term debt is down to $313M. At this point AMD is in a stronger financial position than they ever have been before.

Looking forward, AMD’s expectations for the quarter and for the rest of the year are as equally lofty as the preceding quarters. Demand for AMD chips still outpaces supply in most segments thanks to the ongoing chip crunch and substrate supply issues, so AMD has yet to fully tap the current market, let alone prepare for any further growth in product demand. Consequently, AMD is projecting some very rosy figures for Q2’21 and for the full year. The company expects to book $3.6B (+/- $100M) in revenue for Q2, which if it comes to pass will be an 86% jump over Q2’20. Meanwhile AMD has revised their full year 2021 projections, and are now expecting total revenue to increase by 50% versus their $9.8B FY2020. 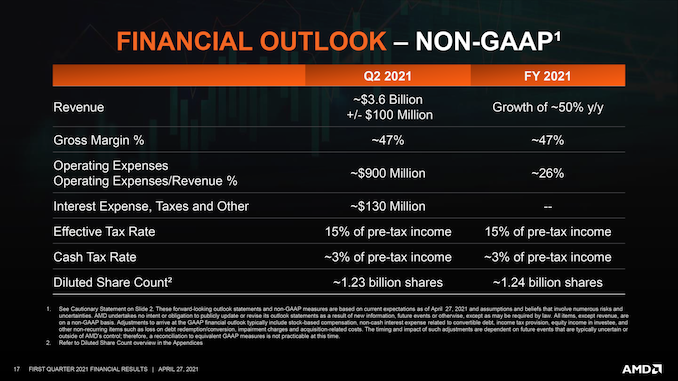 As for AMD’s product lineup, while the company is now decidedly early-to-mid cycle on its CPU products, today’s earnings release does have some interesting GPU news. First up, AMD is still in the middle of launching its complete Navi 2x stack of GPUs and associated video cards. Along with continuing that launch on the desktop, the first mobile Radeon RX 6000 products are slated to launch later this quarter. And in the HPC space, AMD is expecting to ramp their next-generation Radeon Instinct products in the second half of the year, which will be going into the forthcoming Frontier supercomputer, among other projects.