With the high demand for semiconductors causing most companies to focus on their high margin, high profitability components, I wasn’t expecting to see many launches of low-to-mid range hardware for the rest of 2021. AMD has surprised me in announcing its entry and mid-level processors with integrated graphics today, offering up to eight Zen 3 cores and Vega 8 graphics, but AMD is pointing out that these models are for the pre-built system market only right now. AMD has plans to enable a full retail offering for these components, but this will happen later in the year.

AMD’s processors with integrated graphics onboard, known as APUs, have easily identifiable product names because they all end in a G, for graphics I presume. AMD has launched several generations of APUs built upon its Ryzen architecture:

Both 2000G and 3000G offered parts at retail, however we never saw a formal retail launch of Ryzen 4000G. This product line was focused for the pre-built market, especially for business ‘PRO’ use. We ended up obtaining three of the APUs in this market, and put them to the test.

Today the Ryzen 5000G series comes out to play, again for pre-built systems, but AMD is this time making clear that it will also come to retail for regular systems and gaming systems. These new Ryzen 5000G APUs are built on TSMC’s 7nm process, and will feature eight Zen 3 cores with Vega 8 graphics. All CPUs will also have 24 lanes of PCIe 3.0 and support DDR4-3200.

AMD has had several products with Zen 3, including the regular Ryzen 5000 and EPYC 7003 processor lineups, and 5000G will take on the same feature set. This means that AMD will deal with 8-core CCX designs with a unified L3 cache across all the cores within a CCX. While the Ryzen and EPYC processors offer 32 MB of L3 cache for eight cores, the Ryzen 5000G will have 16 MB of L3, but each core will access to the full 16 MB. The Ryzen 5000G series remains a monolithic design.

Users might be disheartened to hear that this is another APU with Vega 8 graphics. AMD made it clear that the jump from 12nm to 7nm gave them a lot of extra frequency, from 1400 MHz to 2100 MHz, which enabled them to optimize for 8 compute units of Vega on 7nm, rather than the 11 compute units on 12nm, and still give a substantial speed-up in performance. AMD’s philosophy with the APU line has been to mix and match what is needed on the product at the right time, and enabling RDNA/RDNA2 on an APU at the same time as changing the CPU core might be a couple of steps too much with a new product. However it is what it is, and the increased L3 cache range for the cores will have a direct knock-on to graphics performance.

The top processor is the Ryzen 7 5700G, built with eight Zen 3 cores, offering a base frequency of 3.8 GHz and a peak turbo of 4.6 GHz. The whole chip has a 65 W TDP, which based on AMD’s socket specifications, means that 88 W is likely to be observed in retail configurations. The Ryzen 5 5600G is a similar design, but with six cores and slightly lower frequencies. The Ryzen 5 5300G is slightly different in that it has only 4 cores, and AMD has cut the L3 cache to 8 MB. 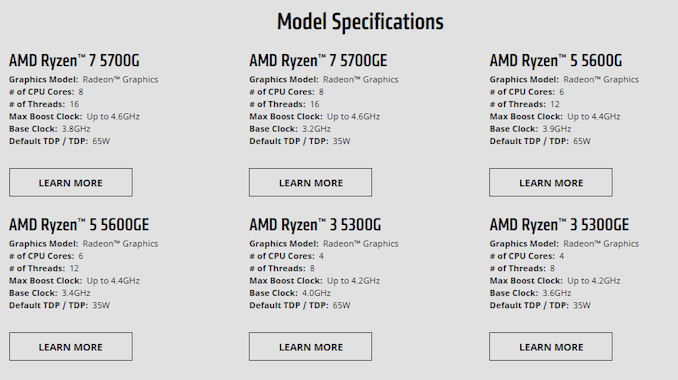 Each of the 5000G processors will have 5000GE counterparts targeting 35 W TDP. This TDP change is reflected in the lower base frequencies and likely a lower sustained power.

These processors have already been spotted inside new Dell pre-built gaming systems. At a time when discrete graphics are hard to come by, and we’ve seen pre-built systems being sold without graphics cards, an injection of APUs might help fill the void. However, APUs might end up going up in price as a result – perhaps why AMD wants to keep them in an OEM configuration for now.

We've been asked to showcase the difference between the CPUs and APUs.

However, there are a number of differences as well. The 5600X CPU has an extra +200 MHz on the turbo frequency, whereas the 5600G APU has +200 on the base frequency and it also has integrated graphics. On top of this, the CPU has PCIe 4.0 rather than PCIe 3.0, and the CPU has double the cache. If we go up to the 8-core parts, then that disparity changes a little.

For this comparison, there is no base frequency difference, but the turbo is higher on the CPU. The APU still has the integrated graphics, but is only PCIe 3.0 off the processor and not PCIe 4.0 like the CPU. We still have the cache difference.

AMD has confirmed that X570, B550, and A520 motherboards will support the new 5000G processors. X470 and B450 motherboards might also be supported, but that depends on the motherboard manufacturer. At this time, for anyone lucky enough to get one on the open market, special Beta BIOSes will be needed to enable full performance.

Aside from the official APU announcement, two more processors appeared on AMD's list of parts. The Ryzen 9 5900 and Ryzen 7 5800, both without X at the end, are equivalent 65 W parts but set for the OEM market as well. At this time, AMD has not stated if these processors will ever come to retail.

AMD now has 12 processors in its Ryzen 5000 series family. Eight of them are for pre-built OEM systems only, and four are on retail shelves.