Razer offers a wide array of display options on the Razer Blade 15, with the Base model having two choices, and the Advanced model offering three. On the Base, you can opt for a 1920x1080 144 Hz IPS panel that covers the sRGB gamut, which should suit the RTX 3060 very well. Optionally, there is the 2560x1440 panel, offering a 165 Hz refresh rate and P3 gamut coverage, and as we have just seen, it really fits the RTX 3070’s performance profile well.

The Advanced model has a 360 Hz 1920x1080 sRGB panel, which is a lot of Hz. The QHD offering for the Advanced model is a 240 Hz panel, with sRGB gamut coverage, and crucially, Advanced Optimus which we will go over shortly. Finally, for those with lots of dollars to spend, and for those that love contrast ratios, Razer offers a UHD OLED display as well, which is limited to a 60 Hz refresh rate but does offer touchscreen functionality. For gaming, the other models with their higher refresh rates seem like a better fit, but OLED is always a visual stunner. 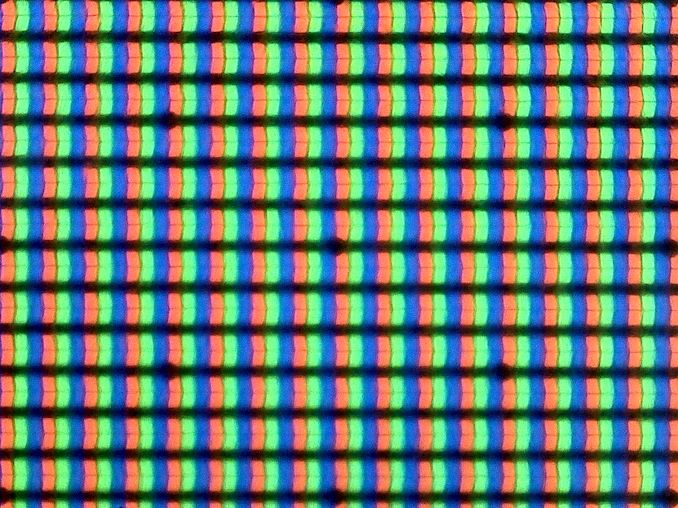 On all of their Blade laptops, Razer offers a built-in display multiplexer to allow the customer to choose whether to run the display directly off the NVIDIA GPU or via the integrated Intel GPU, vis-à-vis NVIDIA’s Optimus technology. If you are running off the battery, Optimus is the way to go, but if you are running off AC power, directly connecting the GPU to the display will give the best performance and allow the display to be used at its high refresh rate setting. That being said, the one exception to this is the Advanced model with the 240 Hz QHD panel, as that panel supports NVIDIA G-SYNC, and also Advanced Optimus. Advanced Optimus brings all the benefits of the battery savings of Optimus, with G-SYNC support, and unlike the other models, does not require the user to reboot the laptop when switching the multiplexer.

Razer let us know that even though they already include the software-switchable multiplexer, Advanced Optimus requires a G-SYNC panel as well, and unfortunately the only Razer Blade 15 panel choice with G-SYNC is the QHD 240 Hz offering. Consequently, all of the other models require a reboot to switch the display from iGPU to dGPU. That is very unfortunate, as the reboot is always a friction point. But at least Razer offers the multiplexer – giving users the option to switch over entirely to the dGPU – as many other devices do not.

Meanwhile it's worth noting that during the review the laptop was updated to the most recent NVIDIA GPU driver, which has a bug which prevents the dGPU from being directly connected, resulting in a black screen on reboot. Razer and NVIDIA are both aware of this, and will issue a corrected driver to fix it hopefully soon. In the mean time, we suggest that you do not update the GPU driver until this bug is resolved.

We’ve covered this a few times in the past, but it is still an issue in Windows 10 that can not be ignored. Razer offers two display panels with P3-D65 gamut support (which they, like most companies, incorrectly label as DCI-P3 which is not applicable in the PC space, and has a different white point). And while you would think a wide-gamut display is going to be better, sadly, it is not. Windows 10 still has no meaningful system-wide color management system, and as such, defaults to outputting all images as if they were to be displayed on a sRGB display. That means that unless you are using specific applications that handle color management, all colors will be blown out on a P3 D65 display. It is very unfortunate, as you would expect a P3 gamut to offer better color reproduction, as it can present more of the visible spectrum, but in almost all cases, it will be incorrect. Proper desktop monitors with wide-gamut support may offer 3D look-up tables to allow the user to switch from sRGB to P3 or AdobeRGB, but almost no laptops offer this, including the Razer Blade 15.

One complaint we still have with too many laptops these days is that the display is not calibrated. Thankfully, Razer is providing individually calibrated displays on the Razer Blade 15, which is something to commend them on. But, there is a catch: Razor is using ICC color profiles at the OS-level to apply their color correction.

As a bit of background, there are two ways to ship calibration information with a display. The first is to test each display at the factory, then adjust the display's internal lookup table (LUT) to output a color-corrected image. The second way is to utilize an ICC color profile on the display in software, which will do the same thing, but in software. The ideal way to do this is in hardware, as it is seamless for the end user, and has the benefits of not causing crushing and banding artifacts than an excessive ICC profile can cause. Also, not all applications support ICC profiles, and the color correction may just be ignored, depending on what is being run.

Razer for their part is using the software approach, and while that is still a much better experience than not color correcting at all, it is not without its limitations. For example, when setting the display to 200 nits of brightness, if the ICC profile is bypassed, the display brightness is actually 240 nits. That is a significant difference, and it's because this particular display is very heavily over-saturated on green, which then has to be clamped down on in software. The end result is the proper 200 nits with decent accuracy – so the desired objective is achieved – but it comes at the cost of greater power usage by the display than what we'd see tweaking the display in hardware.

So, with that out of the way, here is how the Razer Blade 15’s QHD display handled our display test suite. For reference, we utilize the X-Rite i1Display Pro colorimeter for brightness and contrast measurements, and the X-Rite i1Pro 2 spectrophotometer for color accuracy testing. The Razer Blade 15 was tested at its native color gamut of P3 D65 using Portrait Displays’ Calman software suite. 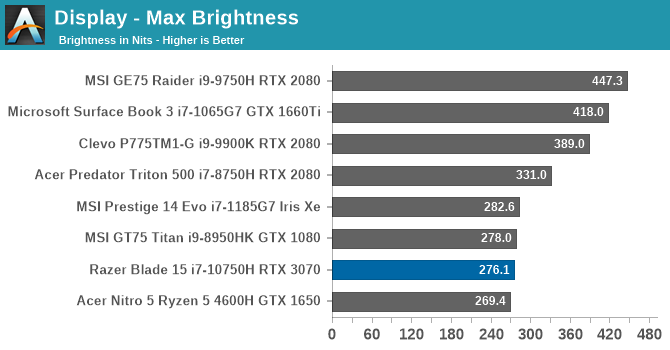 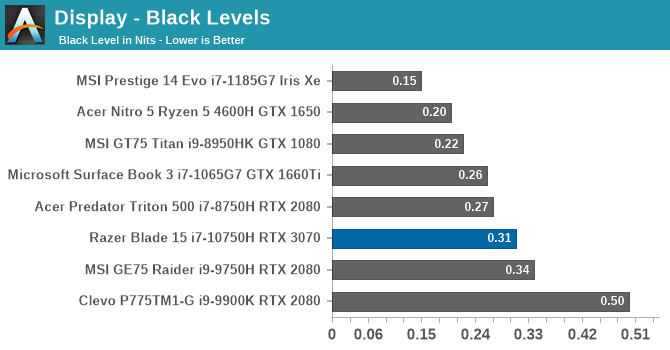 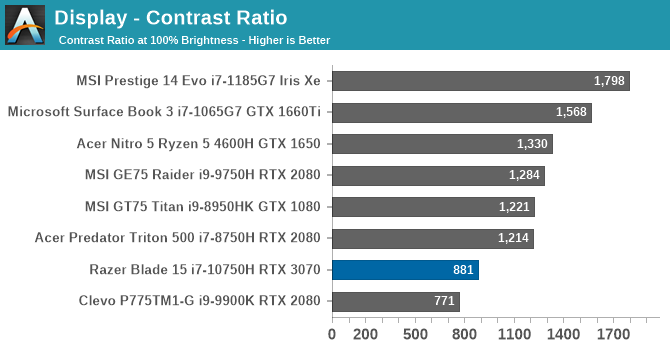 The QHD model of the Razer Blade 15 Base model does not get overly bright, at just 276 nits, and the contrast is very poor compared to the best IPS displays around, which tend to average around 1500:1 or better. This is not just a function of the display being a 165 Hz panel either, as we have tested other high-refresh displays that do significantly better, at least in terms of contrast ratio. 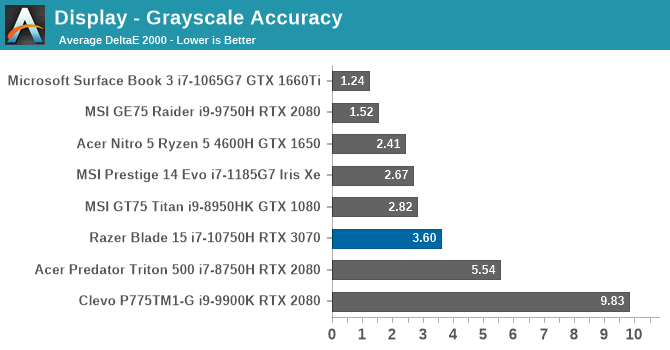 With Razer claiming that the displays are calibrated individually, hopes were high for solid results on the grayscale testing, but while good, it is not great. Gamma was very flat though, but the red values were quite high compared to blue and green. To confirm, this was tested with the ICC profile selected, as bypassing it made the display tilt very heavily towards green. 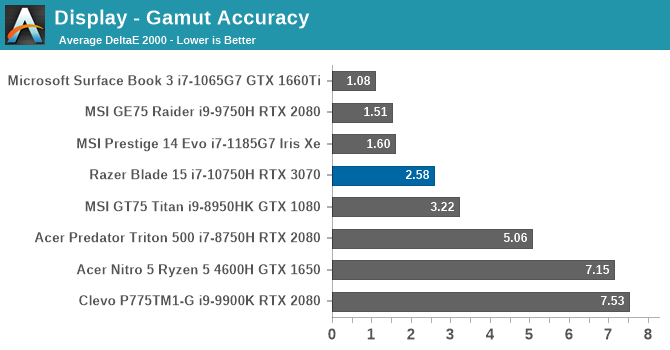 As far as the primary and secondary color accuracy, with the caveat that this display is targeting the P3 D65 gamut, and not normal sRGB, Razer has done a great job. They pretty much hit all of the 100% levels for all of the primary colors, with yellow being the weakest result in the secondary range. 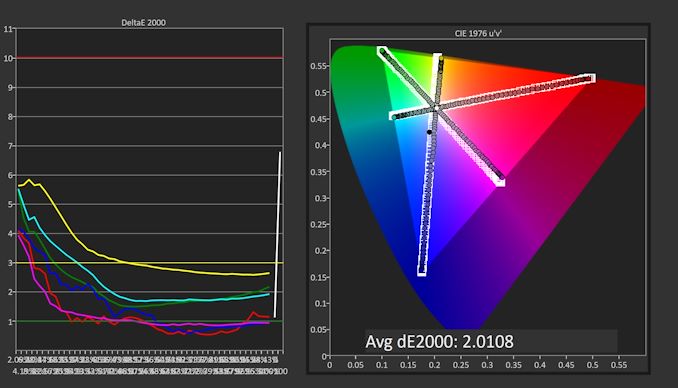 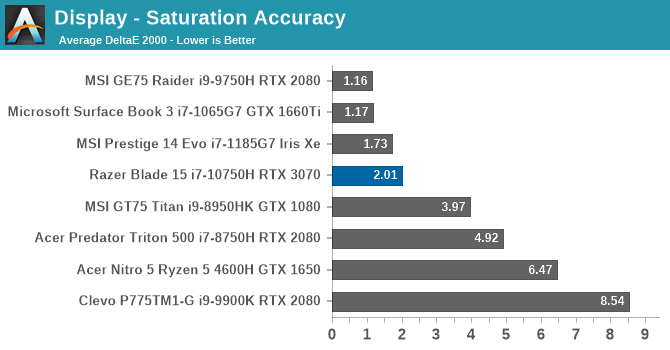 While the gamut test plots the results at the 100% levels for the primary and secondary colors, the saturation test steps through at 4-bit increments from 0% to 100% on each color. While not quite as accurate at low intensity, the colors all fall under the 3.0 error level that we would consider to be a good result by the time they hit about 40% brightness. 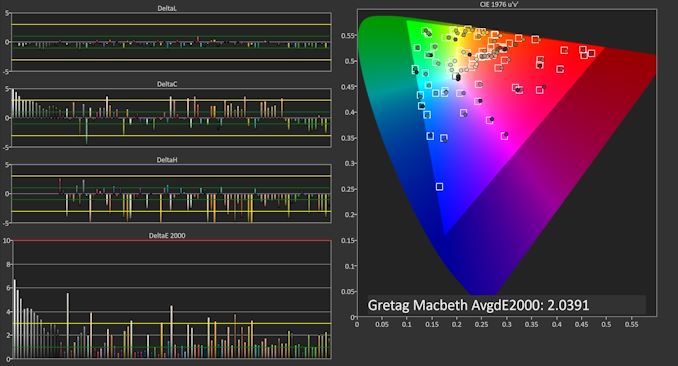 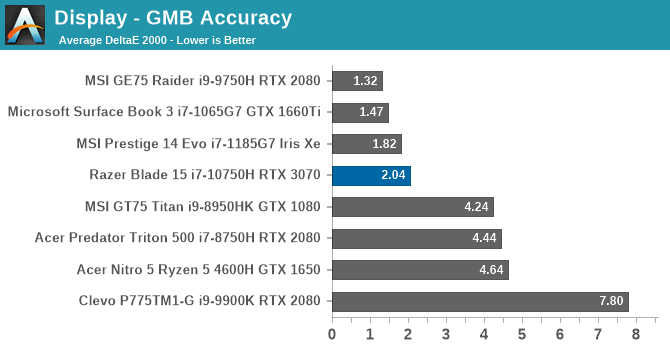 The final sampling is the Gretag Macbeth test, which tests a variety of color points, rather than just on the primary and secondary color axis, including the important skin tones. While a few colors did have error levels that were excessive, on average, the display did a great job of hitting most of the color points with very high accuracy.

Finally, to give a relative error level, this colorchecker swatch displays the targeted color on the bottom, and what the display produced on the top. It is relative though because any error levels in your own display will cause an offset, but it does do a great job showcasing what the other tests displayed. On the whites and grays, the Razer Blade 15 is too far into the reds, but on the colors themselves, the display is in fact very accurate.

Gaming laptops may not be the devices where people crave hyper-accurate displays, but on premium devices, you should expect that the manufacturer has provided at least a reasonable degree of color-correction. Razer, despite using the less than ideal ICC color correction, has done a good job calibrating this display for most tasks. However, as a P3 D65 display, Windows 10 does tend to blow out pretty much everything you would want to display on it. Some people prefer that, so maybe this is done by design on the Razer Blade 15, but until such a time as Windows provides a system-wide color management system, P3 gamuts will always be problematic.

The display does hit some highs though for its intended target. With a 2560x1440 resolution, the Razer Blade 15 really fits the included GPU well, allowing for gaming at the native resolution without compromise on fidelity. It feels like the RTX 3070 Laptop GPU really is the ideal GPU for such a system. Also, the 165 Hz refresh rate adds smoothness to the gaming experience that makes it very enjoyable. Otherwise, it would have been nice to see Razer offer G-SYNC across the board, which would have also enabled Advanced Optimus to remove the pain point of rebooting when switching the display multiplexer, but even with "just" a hardware multiplexer for switching between Optimus and direct dGPU mode, it is still a great system for its intended owner.