The Intel B560 Motherboard Overview: 30+ Budget Models Starting from $75

Starting our B560 overview in alphabetical order (by vendor), the first board we're taking a look at is ASRock's B560 Steel Legend. The Steel Legend is a common mainstay on its premium desktop chipsets as a mid-range model and currently sits atop its product range for B560. Visually, the ASRock B560 Steel Legend is using a black, grey, and white urban camouflage theme on the PCB, with silver and grey heatsinks. It includesRGB LEDs integrated into the chipset heatsink and along the right-hand side of the board which creates an underglow effect. 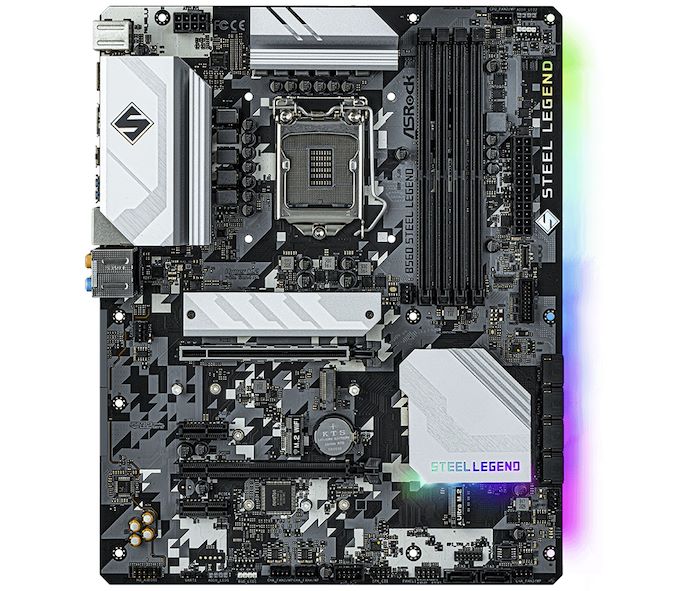 On the rear panel are one USB 3.2 G2 Type-C, four USB 3.2 G1 Type-A, and two USB 2.0 ports, with an HDMI and DisplayPort video output pairing. For networking, there is a single Realtek RTL8125BG 2.5 GbE controller, while the board's five 3.5 mm audio jacks and S/PDIF optical output is driven by a Realtek ALC897 HD audio codec. Finishing off the rear panel is a PS/2 keyboard and mouse combination port.

ASRock has set an MSRP of $130 for the B560 Steel Legend, which is representative of its modest controller options,and the market position of B560. It is nice to see ASRock has included a 2.5 GbE port which is becoming normalized as we move past Gigabit networking.